In Circles, a based-on-fact drama about crop circles in England, is unfortunately inert and dead on arrival. It’s a muddled ball of confusion that struggles fruitlessly to provide some sort of context or emotional connection among the characters, the audience, and the plot. Otherwise, it’s not really terrible.

A reporter, Lara (Cassandra Thomas, “The Duchess and the Highwayman”), and her beleaguered cameraman Yossi (Jonnie Hurn, who also codirected and cowrote the script) arrive in rural England to investigate those notorious complex circles somehow carved into wheat fields, seemingly overnight. They encounter a broken man named Hatter (James Fisher, “A Vampire’s Tale”), who’s been looking into the phenomenon himself for almost two decades. Hatter is broken in that he’s more or less unemployed, lives on a barge, and appears to have psychological attacks from time to time that are alleviated only when he frantically sketches something.

The denizens of the peaceful village that’s home to many of the crop circles are happy to cooperate in the investigations, as there have been several such undertaken over the years. (In fact, some brief interviews appear in the film that are of actual villagers, just to provide some subtle verisimilitude to the movie). But their kindly, gregarious nature is in contrast to Hatter’s mad, iconoclastic behavior; he spends plenty of time gazing off into the distance while mumbling about strong forces at work and being in tune with Mother Earth.

In fact, there’s a lot of mumbling in In Circles. The rich accents, coupled with rapid delivery of same, are overwhelmed by constant music or other sound effects. There’s a heavy reliance on Celtic tunes, as one might expect, but far too often the music selection is in direct opposition to the mood of the scene — such as a solid, almost Gothic metal melody for a sad scene or a dirge for something a little more upbeat. The songs are relentless; Hurn and co-director Ian Manson don’t seem content to simply let a scene and its dialog speak for themselves; they have to make sure every second of dramatic tension is blotted out by the droning of desultory chords.

So what’s at the bottom of this mystery, anyway? Recall that this is supposedly based on real events. If you remember your recent history, you’ll have an excellent idea of how these crop circles came to be. If not, well — you’ll still be able to figure it all out well before any of the characters do.

Let’s take a moment to look at some of the brighter aspects of the movie. Thomas, Chloe Farnworth (“Sinbad and the War of the Furies”) and Dan Burman (“The Devil’s Bargain”) are attractive leads, and the film is fairly well shot, making good use of both the sun’s sparkling beams and the dangling tendrils of the oncoming dusk. There are also hints of humor, times when the movie doesn’t seem to be taking itself too seriously. But these moments are fleeting, and the tone quickly shuffles right back to that of impending doom. As an added bonus, the movie features a rare appearance of an older woman getting together with a quite younger man. Fascinating to spot!

In the end, one is left to wonder what lessons have been learned, what information gleaned. Do we know who or what created these (fictitious) crop circles? Do we know more about Lara and Yossi? Or about Farnworth’s Aideen or Burman’s Dean, or how any of these people feel about one another? Do we know more about Hatter’s backstory? The underlying answer, unfortunately, is that none of the questions truly matter. The filmmakers don’t allow the audience more than superficial involvement with the characters; we’re not emotionally invested in them, so their plights and curiosity belong to only themselves.

Therefore, In Circles is not a recommendable movie. There’s little drama, little tension, no sex or violence, and a trifling amount of comedy. This all leads to large swaths of dullness, covering the screen with a bland, boring, and listless canvas.

Movie Review: Norman: The Moderate Rise and Tragic Fall of a New York Fixer (2016)
Movie Review: The Road to Mother (2016) 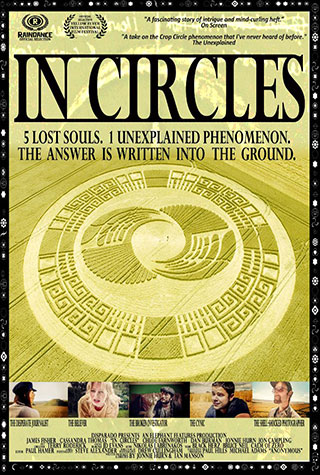