This mediocre captivity-and-ordeal thriller, Valley of Ditches, is bound up in some atmospheric visuals and moody dark ambient music, but it’s too vague and too shallow to make a real impact. Its initially bold premise soon gives way to repetition — and frankly the simple hope that none of the characters will utter any more of the cringeworthy dialogue.

We first meet Emilia (Amanda Todisco, “Our Life in Make Believe”) wrapped up in the arms of her boyfriend, Michael (Jeremy Sless, “Armageddon Ed’s Ticket to Hell”). Between pregnant pauses they murmur about the nature of death, pondering the existence of an afterlife. I can imagine a young Cormac McCarthy writing this stuff for a school project.

Their existential embrace becomes a before-and-after framing device as we cut to the present. Emilia has been tied up by Sean (Russell Bradley Fenton, “Freshman Psych”), who is digging a hole in the desert. Insisting on “teaching” Emilia, and possibly “saving” her because of unnamed “sins,” he cuffs her to her dead boyfriend and leaves her in a shallow grave.

The greater chunk of what follows is a blend of “Buried” and “127 Hours,” with the remarkably resourceful Emilia going to some grisly lengths to escape. Meanwhile, we get flashbacks — replete with yet more clunky, portentous dialogue — recalling her home life; specifically her drunken, abusive father. She’s had enough of being possessed by men — something we discover far too late in the narrative.

Beyond a basic drive to survival, the characters are both burdened by cliché and unburdened by clear motivation. Convincingly loopy Sless’ performance may be, but Old Testament ranting is lazy shorthand for unhinged evil. And his bible-bashing bad guy is a frustrating enigma. He verbally interrogates God, questioning how He could allow such sin to exist, but it’s never clear what actual sins Emilia has committed, beyond a vague allegation of “abusing the gifts He gave you.” Does Michael hate that Emilia is a woman? Is he a Reddit troll, finally able to carry out his impotent threats?

Michael proclaims he is “using violence for a higher purpose,” which may point to a deeper theme that the film is skirting. It is certainly true that not all of the violence we see is equally reprehensible. Perhaps by the time we get to the what-goes-around-comes-around finale, we are supposed to be questioning what violence is for: Whether it can be used responsibly; whether it is, under peculiar circumstances such as these, deserved. But it’s an intriguing idea hopelessly obfuscated by terrible dialogue. “I know,” Emilia says to one character, entirely out of the blue, “it’s who you are; you can’t change it.” These lines have the air of profundity but none of the content.

And the screenplay problems extend to the overall structure of the film. For a sub-80-minute movie, there are yawning stretches of dead space, usually as Emilia contemplates the hopelessness of her situation. In more skillful company these moments may have carried weight, but Todisco’s performance never creeps beyond the bog standard scream queen. There’s a sequence where wolves circle the grave — represented by snarling sounds and shifting dirt — and Emilia yells and they bark back, and Emilia yells again, and dear Lord I thought it would never end. She gives a climactic speech about control and submission (as if in contemplating the nature of death the script hadn’t already bitten off more than it could chew) which does nothing to cohere what we’ve been shown up to that point.

Maybe a simple exploitation-and-revenge structure would have served Valley of Ditches better. It would certainly have made for a more enjoyable and less tin-eared 77 minutes. With its thoughtful cinematography and Khris Clymer’s brooding (if over-insistent) Dead Texan-style score, the signs all point to something with ambitions to scour the soul. But in practice it merely passes by, humorlessly and quite tamely (one genuinely shocking scene notwithstanding). And then like desert sand it is swept from the memory. 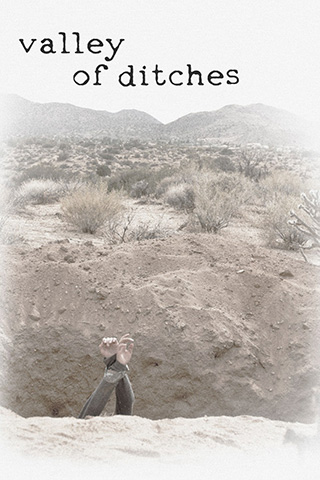