Philosopher Henri Bergson said that once people begin sensing that something is amiss and start looking for answers, “inner knowledge and anomalous outer experiences show them a side of reality others are oblivious to […]” In Personal Shopper, French director Olivier Assayas (“Clouds of Sils Maria”) succeeds in reminding us, as Shakespeare suggested, that there are more things in heaven and earth than are dreamt of in our philosophy. Winner of the award for Best Director at the 2016 Cannes Film Festival, Assayas’ latest film is part personal drama, part ghost story, and part mystery. Though not an easy film to categorize, it is compelling in each aspect.

Set in Paris, Personal Shopper operates on both a physical and psychological level, suggesting that our imagination, our memories, and our sense of a deeper reality are as real as our physical existence. Similar to the role she played in Assayas’ “Clouds of Sils Maria,” Kristen Stewart (“Anesthesia”) does a masterful job as Maureen Cartwright, the personal assistant to the elusive celebrity fashion model Kyra (Nora von Waldstätten, “The Dark Side of the Moon”) whose job it is to be Kyra`s personal shopper. Purchasing clothes at expensive boutiques and jewelry stores such as Cartier`s in London and Paris, Maureen is always on the move, but, unlike Val in “Clouds of Sils Maria,” she rarely interacts with her superior on a personal level, often leaving the clothes for her in her vacant apartment.

Although Maureen leads a very active life, an air of sadness permeates her presence. To add to this aura of loneliness, she has been devastated by the death of her brother Lewis from a congenital heart condition, a condition that she also shares. Like her late brother, Maureen is a medium and has made an agreement with Lewis that whoever dies first will attempt to contact the other from the spirit world and she is now single-minded in accomplishing that. Though she is an active participant in both worlds, she is ambivalent about whether or not the after-life is real and her distaste for the commercialism of the fashion world creates a divide between different aspects of her personality.

Personal Shopper opens on an eerie note as Maureen walks through an abandoned house to see if the spirit of her dead brother is present and to reassure a buyer that there are no unfriendly ghosts around. What she does find, however, is not reassuring to the prospective buyer. On the surface, the special effects surrounding her discovery of an angry spirit who spews ectoplasm is a throwback to Grade B genre movies (according to Assayas, the effect bears a striking resemblance to actual photographs taken by spiritualists in the nineteenth century), but the effect may give us the impression that the spirit world is a terrifying place. When asked what she is doing in Paris, Maureen says that she is “waiting.”

Attempting to gain insight into contacting her brother, she explores the work of Swedish artist and mystic Hilma af Klint who is considered to be the inventor of modern art and watches an old TV movie about the author Victor Hugo and his connection to spirit communication who learns to interpret the meaning of raps on a table. Assayas has a reputation for taking risks and, in a sequence that lasts a full half hour, on a train trip, Maureen receives text messages from an unknown source whose identity remains a mystery. Though she suspects that the texter is Kyra’s overbearing German boyfriend, Ingo (Lars Eidinger, “The Origin of Violence”), she remains uncertain whether or not the sender is even alive.

Trying to fend off the relentless questioning, she reveals that she is tempted by what is forbidden, in particular, trying on Kyra’s outfits which she has agreed not to do. When Maureen does succumb to the temptation, her entire personality seems to take on a new dimension and she begins a gradual awakening of self. Assayas said that he wanted to make “a film about the tension between our inner and outer world, especially within the context of living in a society that’s increasingly materialistic and rejects anything involving spirituality, or the imagination.” With Personal Shopper he has again validated Albert Einstein’s saying that “the most beautiful thing we can experience is the mysterious.” 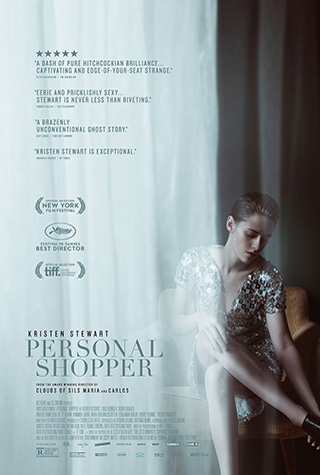