Realizing that she can no longer play the roles she played when she was twenty, the now forty-year-old European actress Maria Enders (Juliette Binoche, “Godzilla”) faces the consequences of the passage of time. Nominated for a Palme d’Or at Cannes in 2014, Olivier Assayas’ (“Something in the Air”) Clouds of Sils Maria explores the life of a successful actress who has become obsessed with the challenges posed by youth and questions what she has accomplished so far in her life. Set in the gorgeous town of Sils Maria in the Swiss Alps, the film, whose title mirrors a unique cloud formation that snakes between the mountains, begins on a train heading to Zurich.

Accompanied by her assistant and alter-ego, Valentine (Kristen Stewart, “Still Alice”), Maria is en route to accept an award for William Melchior (Valery Bukreev), a playwright who discovered her over twenty years ago. Val is more, however, than just a competent assistant who schedules her events and screens her phone calls. Her calm and centered demeanor is a foil to the high-strung Maria whose insecurity and indecisiveness threatens to undermine her career. When Maria discovers that Wilhelm has died suddenly, images from the past surface including an unpleasant relationship she had with a co-star, Henryk Wald (Hanns Zischler, “Stations of the Cross”).

She talks to Val about her first role in Melchior’s “Maloja Snake” when she played Sigrid, a twenty-year-old assistant to an older woman, Helena, whose obsessive love for Sigrid became the catalyst for her destruction. Now, a well-known director, Klaus Diesterweg (Lars Eidinger), has asked Maria to reprise the role. The only difference, however, is that she has been asked to play the older woman, Helena, while Jo-Ann Ellis (Chloë Grace Moretz, “Kick-Ass 2”), a flaky young actress and media celebrity is to be cast as Sigrid. According to Assayas, “Any actress lives in two worlds, the world of their everyday life and the fantasy world where you have to grasp and live the life of a character.” In this situation, the two worlds intertwine.

Maria says that she cannot identify with the older woman and clings to the image of herself as a young woman, expressing her shaky identity in interactions with Val. Though she reluctantly accepts the part, she has misgivings about whether she can really capture the role and whether she can handle her fears stemming from the death in a car accident of the actress who played Helena. Separated into two chapters and an epilogue, the majority of Part Two takes place in the Alps, as Maria prepares for the role. It is here that the parallel between the fiction of “Maloja Snake” and the real relationship between Maria and Valentine becomes apparent.

Rehearsing the lines together (Valentine reading Sigrid’s lines), the conversations that take place during rehearsal between Binoche and Stewart, both brilliant in their role, are the high point of the film. Thoughtful discussions take place about superhero films, the public’s addiction to the personal life of celebrities, and the intellectual depth of those in Hollywood. Maria very much represents the older generation, while Valentine is the new, and a love-hate relationship between them is unmistakable. Though not overtly physically attracted to each other, there is an obvious dependence that crystallizes when Maria disregards Val’s opinions, and the young assistant threatens to leave. Maria begs her to stay, however, realizing how much she needs her energy and spontaneity around her, but the universe has a different plan.

Enhanced by the magnificent Swiss alpine cinematography of Yorick Le Saux, sharp and engaging dialogue, and a poignant soundtrack of music by Handel and Pachelbel, Clouds of Sils Maria is one of the most rewarding films of the year. It excels not only because of the striking performances of Binoche, Stewart, and Moretz, three great actresses at the top of their game, but because Assayas is not afraid to acknowledge the mystical presence of nature and its impact on our life. A psychological, “Bergmanesque” drama which can be opaque even while captivating, in the end, leaves us with a sense of the mysterious. 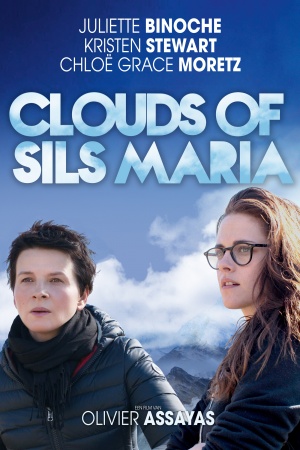