The tragic decay of a brilliant woman’s mind is given a gentle, poignant examination in Still Alice, a deeply moving and beautifully minimalized drama that sweetly takes the high road and finds in its protagonist’s struggle room for love and courage. Adapted from the novel by Lisa Genova and directed by Richard Glatzer and Wash Westmoreland, this is the story of Columbia linguistics professor Alice (a flawless Julianne Moore), who discovers in the first act that she has rapidly developed early onset Alzheimer’s. The news strikes a terrible blow that reverberates through Alice’s family, who we meet in the first scene celebrating Alice’s 50th birthday. But instead of making this an outsider’s look at the horrible hell Alice is slipping into, where we watch as the number of awkward encounters and errors stack up, Glatzer and Westmoreland pull us into Alice’s experience and fill this sad tale with heart and humor and hope.

We’re first alerted to Alice’s problem shortly after meeting her, when during a lecture she’s giving at UCLA, a single word slips her mind in the moment. It’s clearly an alien experience to her and the feeling of awkward worry is palpable from our viewpoint in the audience. It seems then that the movie could simply become a series of escalating variations on this uncomfortable situation, each one revealing more of Alice’s deterioration. It’s still early, of course, but it seems easy to map out the broad strokes of the plot from here. And yet this is where Glatzer and Westmoreland first depart from the obvious.

Choosing to delve deeper, the directors commit their movie to Alice (and by extension, Moore), so that the experience becomes knotted and personal and scary. This removes a certain amount of pity from the equation and transforms it into a more profound effect, one that draws us closer to Alice’s horror so her pain registers importantly, internally. Such an approach allows Glatzer and Westmoreland to sidestep sentimentality and unearth the onscreen emotion in a more natural and less manipulative manner.

To achieve this, they need a great actress and Julianne Moore (“Non-Stop”) gives them a powerhouse performance that is so honest and true that Alice’s arc is able to eschew any hint of treacle. Having a small, intimate story about a family dealing with Alzheimer’s avoid sentimental trappings is a tremendous feat and Still Alice achieves this through the trust that is shared between the filmmakers and their star. Neither aims for excess and so Glatzer, Westmoreland, and Moore all complement each other’s efforts smartly and sweetly, finding a place of reflection and determination in the fog of Alice’s newly reconfigured existence.

There’s a scene where Alice first visits a doctor when a few warning signs pop up and the entire exchange between the two characters is a covered in a single stationary shot, the camera on Alice the entire time. The doctor, who we meet face-to-face later on, is currently just a disembodied voice, while Alice is the scene’s only concern. Flash cards are shown to her with the request that she identify what picture is on them and we don’t see those, either, leaving us as in the dark as Alice as to whether or not she’s aced the test. Moore’s performance here unfolds defiantly in a single take, making the scene not only a a triumphant bid of support on the part of the directors, but also a stirring testament to what Moore can do on her own with nothing but minimal body language and a few lines of dialogue.

This type of confident minimalism from Glatzer and Westmoreland helps further forge our connection with Alice, solidifying the movie’s emotional bedrock with an artful use of filmmaking tools. Just a camera and an actress, the two stripped down to reveal natural beauty. 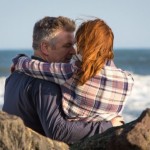 Alice walks away from her doctor’s appointment feeling fine, but her problems continue to mount and the crushing diagnosis eventually arrives. This brings Alice’s family into the dramatic mix as they all struggle to find ways to deal with the rough road ahead. Husband John (Alec Baldwin, “Rock of Ages”) and adult offspring Anna (Kate Bosworth, “Black Rock”), Tom (Hunter Parrish, “Gone”), and Lydia (Kristen Stewart, “The Twilight Saga: Breaking Dawn – Part 2”) are all devastated by the news and try to help as they can.

Here again can be found the gentle, though robust spirit of Still Alice. The family is sympathetic and believably so, but their lives continue on in different ways (Anna is trying to start a family of her own and John has a new job in the wings, among other changes), plus Alice wants to tackle many of the challenges (like remembering a once-beloved recipe, for example) on her own. So the family helps out as they can in friendly, well-meaning ways, but at the same time, life simply goes on.

Despite all that is happening with the other family members, the camera stays on Alice. There are no subplots to distract us from the power of her arc and this level of attention paid to the protagonist is incredibly effective and satisfying. We hear about what the other people in Alice’s life are up to and we see them at gatherings and in one-on-one situations, but Alice is our connection to this world and she remains ever our companion throughout the narrative.

The supporting cast is very strong, too, so even up against such a full and filling performance as Moore’s, the actors don’t back down or turn in weak work. It’s nice to see Bosworth in a decent role again and Stewart is very good as the youngest daughter whose struggles as an aspiring actress open the doors to some of the movie’s most touching moments. Baldwin makes John a likable guy who clearly adores his wife and, with some help from the script, is more complex and nuanced than such a brief synopsis would suggest.

Having such solid performances to fill in the spaces around Moore allows the movie to not miss a step, to maintain its sense of relatable realism. Beyond that, it’s all about Moore and how she navigates Alice’s deterioration. Glatzer and Westmoreland are great at creatively, visually positioning our perspective so we’re constantly in Alice’s shoes, for better or worse. In one of the movie’s most evocative shots, the back of Alice’s tilted head is framed off-center in close-up as her family sits across the room, out of focus in the background, discussing Alice’s future in hushed tones.

This approach of inserting us into Alice’s experience allows for a very emotional examination of the disease. The lack of heartstring tugging, especially in a situation so seemingly ripe for it, is not only pleasantly surprising, but also movingly mature. It speaks to the unpredictability of life and seems anchored by the weight of real feelings, not manufactured ones. Moore gives every scene, every new turn in Alice’s path a strength and resolve that never rings false.

A lovely score and tight editing add to the experience here and even a set of flashbacks that at first seem cliched and unnecessary end up using their grainy film look to haunting effect as one specific memory holds fast in Alice’s mind. There are many great pieces in Still Alice, but the relationship between Moore and her directors is one of those very special filmmaking unions. And the final scene offers that rare delectable taste of cinematic perfection. What an honoring note to end on, what a tender hug of humanism, what a smart way to surprise with a moment and not a plot twist. Moore’s final breath of her performance here seals the deal and the final line of dialogue is exquisite in its thematically all-encompassing simplicity. Graceful is the exit, with Alice and the picture slipping away, but never letting go. 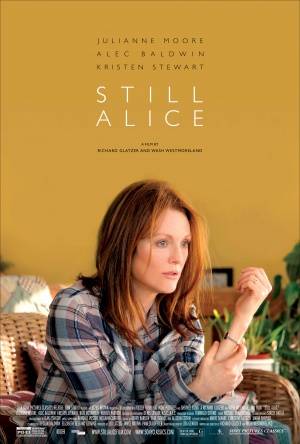