There is a subgenre within American independent cinema of rural Americana, films that depict a section of American society that exists between the familiar towering cityscapes of New York and Los Angeles and the empty expanse of the Western. Rather than being set in wild or agricultural areas, films like “Winter’s Bone,” “Frozen River” and “Monster’s Ball” take place in small towns and communities that are diffuse but still connected. These communities typically consist of working class families plagued by financial difficulties, and the films of this subgenre often present their characters as an aimless or neglected demographic of American society. Where do these people belong, when the America they inhabit is so different from that typically portrayed on screen?

These themes run through writer-director Sydney Freeland’s Drunktown’s Finest, but with particular acuteness due to the film’s focus on contemporary Native Americans, specifically the Navajo Nation in the southwestern United States. Many rural Americana films depict people that could be (cruelly) described as “white trash”, but Drunktown’s Finest is concerned with a different racial group, indeed one of the most underprivileged in the United States. Not only are contemporary Navajo survivors of the genocide perpetrated against the indigenous people of the Americas, but studies have found that unemployment levels, alcoholism and poverty are exceptionally high among Native Americans. Drunktown’s Finest carefully depicts the social problems of modern Navajo without succumbing to sentimentality or mawkishness, instead delivering a sensitive and engaging portrayal of people and community.

The film focuses on three central characters: Sickboy (Jeremiah Bitsui), Felixia (Carmen Moore) and Nizhoni (MorningStar Angeline), all struggling with issues of identity, family and culture. Sickboy is an army recruit about to begin his first tour, but his relationship with his pregnant girlfriend is strained and he is continually embroiled in petty crime. Felixia is a male-to-female transsexual working as a prostitute who auditions for a “Women of the Navajo” calendar. Nizhoni is an adoptee curious about her biological family and culture. The film follows the separate stories of these protagonists, intercutting between them and slowly revealing their connections. Rather than the melodrama of films like “Crash” and “Magnolia,” the connections here are incidental and help to create the film’s sense of community and shared culture, amidst the fragmenting forces of crime, poverty and technology in the modern world. Freeland’s directorial style fluidly cuts between the different threads, which progress parallel to each other in a way that feels natural and not jarring. Director of photography Peter Holland uses largely natural light to help create a documentary feel, and there are points in the film where it seems the characters have been going about their business and the camera simply turned up. 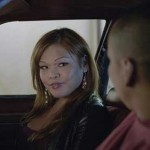 Within this largely naturalistic milieu, there are narrative contrivances such as Nizhoni’s dream seemingly coming true and repeated encounters between Felixia and Sickboy. It is to the film’s great credit that these contrivances feel as natural as the rest of the film. Much of this is down to the performances of the three leads, Angeline and Moore making their feature debuts. Moore is especially engaging as a person caught between competing forces. Felixia asserts her self-chosen female identity despite the remnants of masculinity and encounters with prejudice, while also engaging with her Navajo history and the difficulties of her profession. In all her scenes, Felixia is compelling and alluring, not least because she is clearly wounded. Wounds also run deep for Nizhoni and Sickboy. The former struggles to reconnect with a past she never really knew while also building a life in the modern world, while the latter struggles to abandon the recklessness of his past and take on responsibility. Bitsui could easily play Sickboy as a stereotypical street thug, a role familiar from young black and Latino characters in similar films. Instead, Sickboy is hunched rather than brash and more quietly assertive than crudely aggressive. Bitsui’s performance conveys Sickboy’s experience and discipline, making his wavering in his pursuit of a better life all the more heartbreaking. The viewer gains a sense of his hope and drive, and is therefore moved when things go wrong.

Nizhoni’s arc is equally moving, not least because of Angeline’s soulful performance of blossoming adulthood. Whereas Sickboy looks forward but is held back, Nizhoni looks back while being pushed forward by her adoptive parents. Similar (white) figures of authority provide counsel and opposition to Sickboy, developing the film’s conceit of negotiating different demands. The common denominator among all three characters is how they engage with their Navajo background. None of them wish to abandon it, but all of them have difficulties finding relevance in this culture.

Native American culture is not romanticized in Drunktown’s Finest, but Navajo traditions do help provide a sense of self for the protagonists. The makers of the calendar Felixia auditions for expect the models to speak Navajo, while Nizhoni gains valuable information from an aged road sweeper. Sickboy has a more negative background, his mother a reclusive alcoholic that he actively avoids. But all three protagonists find a measure of comfort and understanding in their encounters with Navajo traditions, including a Kinaaldá coming-of-age ceremony and a hogan structure. In a place of tradition that survives in the modern world, with elders who maintain Navajo culture, these three young people achieve a measure of peace despite their fraught and contradictory lives.

To the great credit of Drunktown’s Finest, Navajo traditions are presented as relatable and relevant. There are no great signs or spiritual interventions, but Navajo spirituality appears as a means of understanding the world and one’s place in it, with neither condescension nor hyperbole. Not only can Sickboy, Felixia and Nizhoni gain something from it, but the viewer can gain an understanding of how people negotiate complex and contradictory desires and values, presenting an environment in which a transsexual can both chat on Facebook and help prepare a Kinaaldá. 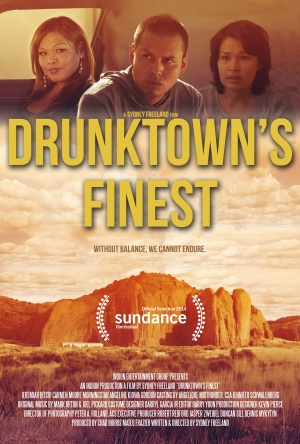