The problem with wisdom, we are told by a voiceover the moment Poker Night begins, is that you only get it after you need it. Hindsight, similarly, is like looking into a rear view mirror, unable to see what you’re going through until you’ve already passed it. Now that we know how important those words are, and have seen our protagonist and narrator Stan Jeter (Beau Mirchoff, “I Am Number Four”) lying bloody on the ground, we are told that the only way to gain any wisdom from his story is through hindsight, and expected not to be annoyed by how heavy handed the script of this film has been so far.

Written and directed by Greg Francis, Poker Night is a movie that refuses to be subtle, from its frequently implausible dialogue to the inherently shocking imagery and juxtapositions it relies on to create and augment its scares.

After being promoted in the wake of an extremely lucky arrest (while trying to look at the moon, Jeter quite literally stumbles upon something that other cops have been dedicatedly searching for), Jeter is invited to join several seasoned detectives from his Warsaw, Indiana police department at their regular poker night. The whole point of poker night, as one of them (Giancarlo Esposito, “Rabbit Hole”) tells us, is for the “young buck” to listen to the senior officers’ stories, learn from them, and then go out into the world and “do likewise.” “We ain’t worth much else, except these stories,” their lieutenant Calabrese (Ron Perlman, “Pacific Rim”) adds.

Thus beginith the lesson. Each man takes a turn sharing a tale of extremely average police work, only to have the lieutenant follow it up with something like “you can’t teach that,” toward Jeter. The men drink, laugh heartily, curse, and make references to their jobs as much as possible (“Jesus Christ, ask the fucking question before our pensions run out for Christ’s sake,” for example). Once the fame finally ends, Jeter is abducted by a psychotic murderer (Michael Eklund, “The Call”) who has also captured a teenager girl with whom Jeter has an extremely unprofessional history (Halston Sage, “Neighbors”). Now it is up to Jeter to use what he has been taught at the game to get them both free.

This killer, with his strange black mask and its pointedly careless red thread dangling above his pristine dress shirt and vest, is by far the most compelling part of Poker Night. One of my favorite moments of all was the first flashback — we are shown of his life before he started killing, in which he, in this same outfit, is shown to kiss a wife goodbye in the morning and trot off to his office with his little sack lunch. After that, though, even this refreshing character completely falls apart.

Becoming fed up with being just another one of the “sheeple” marching to the beat of someone else’s drum, the masked murderer decides to put together new goals for his new life. So, on a piece of paper that literally says “Goals” at the top, he writes #1: Have sex with little girls, and #2: Kill anyone who gets in the way of rule #1.

Before we can adequately reflect on this obvious rules/goals inconsistency, we are treated to a shot of the killer sitting at the edge of a bed, dead body with splayed prostrate across it behind him, where he lights a cigarette, throws what ignited it behind him, and proceeds to exit the room in clichéd, ineffective slow motion. We also meet his “friends,” clad in all too familiar clown and bunny costumes, after he explains how easy it was to research how to get away with murder via the Discovery Channel and the internet at large; extremely accessible resources utilized by countless people every minute that somehow made him feel like “a member of the most exclusive club ever.”

Despite the writer and director credits going to Greg Francis (who has produced and directed some good television series’ episodes), this movie feels like something that would have been heavily critiqued in a freshman film seminar. From the extremely obvious imagery, the police who repeatedly mention that they see themselves as God’s own superhero messengers sent down to earth to avenge the innocent, and the fact that Krazy Glue plays a surprisingly important part in the development of the plot, Poker Night, with all its monologues and forced artifice, is a hand poorly played. 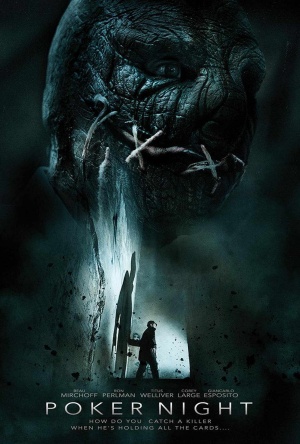