British social realism is a cinema movement that developed in the 1960s with an eye to portraying the dour and grim reality of working class life in Britain. Such titles as “Kes” (1969), “Saturday Night and Sunday Morning” (1960) and “My Beautiful Launderette” (1985) explored social tensions around race, gender and sexuality, as well as unemployment, poor housing and a lack of social welfare, often in an understated, “realist” manner. Rayna Campbell’s Lapse of Honour continues this conceit by updating the concerns of social realism to a contemporary setting of 21st century Manchester. The modern day features of laptops and mobile phones as well as drugs, guns and abusive parents sit alongside matters of unemployment, education and poverty. Added to the mix is teenage pregnancy and rap music, resulting in a motley assembly of elements. Pleasingly, these elements do not clash but complement each other, resulting in a rich dramatic texture for the events of the narrative. The pace of the film is vibrant and lively, rather than unfolding ponderously with languorous shots of the run-down areas. Instead, Campbell delivers a fast and energized portrait of working class life, with downtrodden characters that are nonetheless driven by hope and determination to better themselves.

The central couple of Tommy (Tom Collins, “Brothers’ Day”) and Eve (Lady Leshurr) are engagingly drawn and genuinely sweet, their banter and bickering conveying a palpable sense of young people forced to grow up too soon. The factors that force this premature maturity are formidable, and it says something about the film that parental abuse is the least depressing thing about it. Eve’s mother Linda (Orline V. Riley) rains emotional abuse on her daughter continually, describing her as useless and stupid in a manner reminiscent of Mo’Nique’s powerful turn in “Precious.” Tommy’s father Bruce (Louis Emerick, “Layer Cake”) financially abuses his son by forcing him to pay ever-escalating rent, so as to pay off a debt he owes to local drug lord Razor (Gary McDonald, “Outpost: Black Sun”). Eve and Tommy find solace and inspiration in each other as well as their friends Dean (John Weaver, “The Last Showing”), Dionne (Linda Campbell) and Jennifer (Keeley Fitzgerald), and still have hope and aspirations: Both plan to go to university and Eve has ambitions to make it as a rap artist. Of course these ambitions face further obstacles when Eve discovers she is pregnant. Tommy vows to support her and the baby but due to his father’s demands cannot earn enough money, until Tommy himself turns to Razor for additional employment.

The film’s portrayal of crime is especially effective as it shows how different gangs and their activities are woven into the social fabric of the city. Teenagers on their way to school are recruited by drug dealers to push weed and cocaine on their classmates; a gang leader drops into a taxi firm to collect debts; local clubs are invaded by armed gangs; random assaults and killings occur without warning, highlighting the arbitrary and fickle nature of life and death in this environment. At each narrative turn, Campbell balances the potential optimism with stark and, at times, shocking intrusions of grim social restrictions. The Mancunian street slang adds to the social texture of the film, never appearing forced or artificial but genuine and engaging. Slang dialogue can sometimes be a barrier to understanding, sealing the film’s world off from the viewer and making it too contained. That is not the case with Lapse of Honour, as the inner city milieu of deprivation and difficulty resonates with a range of cinematic offerings, such as the British “Bullet Boy” (2004) and “Nil by Mouth” (1997), both feature debuts concerned with youth and crime in Britain’s urban centers, as well as the American “Boyz ‘N’ The Hood” (1991) and “Menace II Society” (1993) and the French “La Haine” (1995) and “Girlhood” (2014). The Mancunian slang does require close attention, but that is part of the point — Lapse of Honour demands attention and is all the better for it.

The one element of the film that could easily undercut the grimness is Eve’s rap ambitions. Rather than being tacked on for levity or providing an overly sentimental message of triumph through artistic expression, Eve’s music feels like an organic component of the film (and something else for her mother to insult). Eve’s performance at a nightclub demonstrates both her talent and the energy and vibrancy of the music as well as the community. Indeed, the club scene resonates with a brief scene at a community care center, where Eve seeks advice on her pregnancy. The nightclub and the community center are larger versions of the friendships Eve and Tommy long for, indicating that while there is much to oppress them, there is still hope and support. While much of the film is bleak, moments like these add to the sociological detail, creating a greater sense of community and culture.

The greatest strength of Lapse of Honour is its straight-facedness, eschewing melodramatic showboating from its fine cast as well as overt stylistics. A trip to a nightclub segues brutally into a drive-by shooting with scarcely a change in the rhythm of the editing. Intimate cinematography in banal locations places the viewer at a sometimes discomfiting proximity to the action. Yet Lapse of Honour never feels staid or tied to the inertia of its characters, as the bright lighting, lively performances and brisk storytelling propel the viewer along. The ride may not be a pleasant one, but Campbell ensures that it is a compelling one. 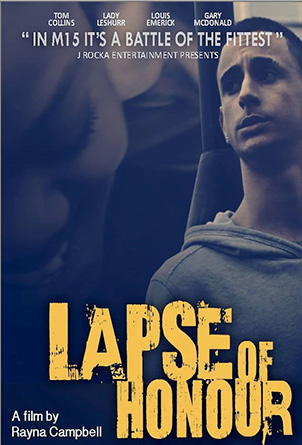