What will it take for you to believe in something you don’t believe in? Is hearing from your most trusted friend enough? Do you need a reliable written source instead? Of course not. What you need is the most popular option: A truth that must be seen with your own eyes. But what happens when that isn’t sufficient? That is a question that doesn’t want to be (but is) evaluated in writer/director Kevin Reynolds’ film, Risen.

Risen aims to convey the biblical story of the resurrection of Jesus in a traditional but epic Hollywood fashion. Billed as the “unofficial sequel” to “The Passion of the Christ,” the story is told through the perspective of a non-believer named Clavius, a fierce Roman military tribune. When Jesus’ tomb is found empty, Clavius is commissioned to find each disciple and Jesus’ body in order to stop potential unrest in Jerusalem. Doesn’t that sound like another mundane cop show? Um, yeah, you know it!

What anchors the film overall is Joseph Fiennes (“Hercules”) as Clavius, who gives a truly solid lead performance. He is the audience’s surrogate and the one we empathize with as he wrestles through a truth he can’t reconcile. It is there where the film takes a fresh turn, although, you wish the whole story was this way and not just half of it. While having the audience understand what world they’re in, who the characters are, and what’s at stake is always important, executing the plot with blandness is a sin. But luckily, the filmmakers breeze their way into a raw and absorbing film after the midpoint.

Yet as Risen finally manages to surge past expectations, it suddenly ends in the reality of disappointment-land. The narrative seems to stop in act two (that’s disguised as act three), which ultimately skips an authentic act three completely. As Clavius’ continues to struggle with what he learns, the film misses a big opportunity in portraying the total cost and consequences of his actions. Just as we see him immersed in Roman culture, a deeper exploration into the world of Jesus’ disciples would have brought a greater complexity for Clavius’ coming of age journey. Another dilemma the story forms is a weak and anti-climactic supporting character arcs that involve Tom Felton (best known as Draco, “Harry Potter and the Deathly Hallows: Part 1”) as Lucius, Clavius’ young aide, and Peter Firth (“MI-5”) as a nervous Pontius Pilate.

Despite the large and fictitious historical license throughout, for faith-based audiences, Risen will be accepted as a film that Hollywood gets “right” while Darren Aronofsky’s “Noah” is seen as an example when artistic license goes to infinity and beyond. As most Christian films handle tales of faith with a heavy-handed and clumsy approach, Risen makes a compelling case for belief because of its appealing star’s relatable struggle for truth. Which is why dismissing the plot of the film is understandable, but dismissing the protagonist is a grave mistake. Sure, Clavius’ story should be more powerful than it actually is and that’s due to how the film chooses to end. We are meant to receive a tale that tries to make our eyes open wide with a fantastical experience (if that doesn’t work on you, recent box office numbers of faith-based films just might), however, Risen fails to reap a bountiful harvest. 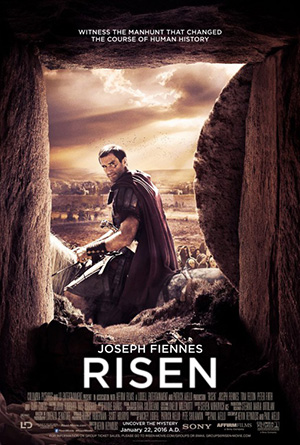