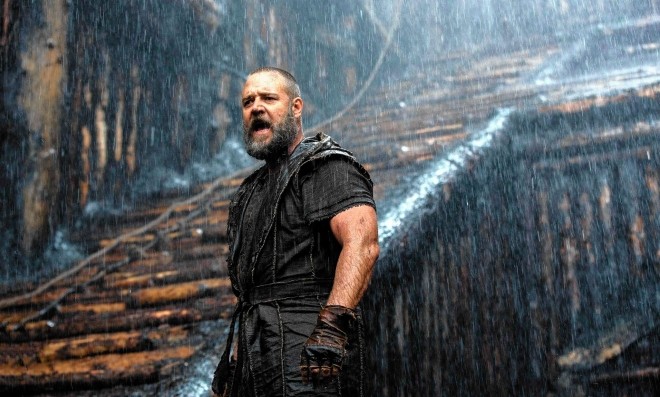 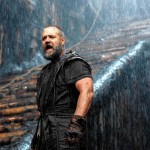 Giant rock creatures? A bevy of clichés? Another awful performance from Emma Watson? So this is what a biblical epic looks like in the new millennium. It’s also what Darren Aronofsky looks like with a big budget. Neither is very encouraging. Well, except for the rock monsters, of course. Aronofsky’s Noah is a non-traditional take on the material, which should sound potentially exciting, but beyond the rock people (a wild interpretation of the fallen angels known here as Watchers and elsewhere as Nephilim), this is a drab and often laughable flick busy revealing a sappy side of Aronofsky that has laid dormant for his entire directorial career.

A creative, visually ambitious mind like Aronofsky seems an intriguing fit for a new take on the story of Noah’s animal-stuffed boat, but who could have predicted that Aronofsky’s plan would be to drag out the big book of Hollywood conventions and thump it over the audience’s head repeatedly? Stranger still is that Aronofsky seems to be in genuine pursuit of an original entry point to this story. It’s hard to believe that a quest for uniqueness could come across so hideously recycled, but the director’s approach to the beleaguered protagonist’s internal struggle is clearly intended to offer something new. It seems that Aronofsky is more interested in Noah’s arc than, you know, his ark.

Considering the simplicity of the title and the casting of solemnly meaty actor Russell Crowe in the lead role, it’s no surprise that Noah is the star here and not the animals. The movie is quick to establish the brutal reality that this Noah and his family must endure, first employing a cheesy animated sequence loaded with text before revealing the practically post-apocalyptic wasteland that is Aronofsky’s vision of a diseased biblical landscape. Noah is acutely aware of the dangers that surround him at all times, having witnessed the brutal murder of his father at the hands of Cain’s vile descendant Tubal-Cain.

Years later, Noah has his own children to protect and apparently only ever encounters complete jerks. It’s pretty clear that Noah and his brood are the only decent people around, although when our hero starts having dreams of a flood that’ll wipe the earthly slate clean, Noah can’t help but form a guilt complex. Why him? It may seem obvious to us, but in the context of Aronofsky’s framework, it’s a fair question at first. Noah decides to seek out the counsel of his ancient, mountain-dwelling grandfather Methuselah (Anthony Hopkins, fully committed to the phoning-it-in portion of his career now), hoping that he can make some sense of his dreams. He ends up having some major hallucinations that send him away convinced that building a gigantic boat to save the world’s animals from the impending flood is now his duty.

So we end up where we expect to, with Noah prepping to build his ark, but Aronofsky tries to mix things up by leaving Noah with doubts. Since God (referred to throughout the movie simply as The Creator) has only communicated with Noah via images, the protagonist gets a bit confused and misinterprets his responsibilities as limited to the protection of the animals. Even though his family is clearly quite good, Noah remains under the assumption that all human life, including his own, must be eradicated during the impending flood. Noah knows that all people are flawed and so his journey is one of coming to terms with degrees of sin and his own imperfections. It sounds like a personal and possibly interesting focus, but the issue here is that Aronofsky’s method of approaching this angle involves treacly philosophical conversations punctuated with big, messy action sequences.

When Noah nears completion of the ark that he’s been building with the help of the Watchers and the plentiful trees that magically grew up around his family in a matter of minutes (no, really), Tubal-Cain (a predictably gruff Ray Winstone) gets word of what’s going on and figures he and his rugged followers should be allowed on board, too. Apparently the entire weight of humanity resting on one man’s shoulders isn’t enough conflict for the movie, so we end up with nastiness personified.

This horrible adherence to basic good-vs-evil movie conventions is made worse by the sheer ridiculousness of, well, everything that comes with Tubal-Cain. His forest camp is a gruesomely hilarious sideshow where he feeds his people by grabbing a live animal and tossing it into the teeming crowd where hands and teeth tear at the flesh and fur as only a zombie horde could do. This goofy juxtaposition makes its point about the way the rival forces treat God’s creatures with a laughable lack of subtlety. The tacky, overly exaggerated manner with which Aronofsky depicts this evil cesspool feels strangely out of character for a director who has generally ignored the need for traditionally tangible antagonists.

Tubal-Cain’s lust for life leads to a big brawling action sequence that involves the Watchers protecting the ark. Aronofsky has never tackled a big screen battle like this before and it’s clear that his often visually complex directorial efforts of the past have not prepared him for this. The sequence isn’t terrible or anything too egregious, but rather just a loud, messy regurgitation of so many blockbuster clashes seen countless times before. Seeing the Watchers in action is mildly fun since the effects that bring them to life have been given an old-fashioned stop-motion-like charm, so the imagery still has a discernible identity at certain times, fleeting as those may be. 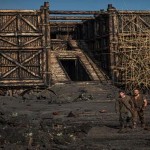 Once the flood arrives and the ark takes off on its journey, Noah creatively checks out. If anything was working before, it definitely drowns in an earnest whirlpool of circling clichés by now. The animals are nearly forgotten, which seems a strange decision given the cinematic possibilities afforded by such a menagerie. Minor cameos during the construction of the ark are all the movie has to offer animal lovers, though it’s hard not to be entertained by the shots of birds storming the boat or tons of snakes all slithering over each other to get a good spot. More of these images would be welcome, especially considering that the brief attention to detail in the variety of shown species stands out as one of the movie’s only worthwhile contributions to the story.

But alas, instead of animals, we have a conflicted Crowe battling both his inner demons and, in one particularly pitiful scene, his external ones, too. We also get Jennifer Connelly as Noah’s equally serious wife who seems depressingly resigned to the fact that she has nothing to do. Logan Lerman is a young talent worth watching in some cases, but here he’s a whiny son who sees the journey his family is destined to take as a death knell for his chances to ever have a girlfriend. And then there’s Emma Watson, whose acting abilities seem to have been forever cursed. She has more to do than most characters in the movie, as well, so her missteps are front and center here. She can always put at least some of the blame on the script by Aronofsky and Ari Handel, which saddles her with some very silly scenes and a groan-worthy speech at the end.

Religious movies have strayed from the biblical text with great artistic success in the past (“The Last Temptation of Christ” remains the prime example) and Aronofsky has exhibited a spectacular skill for capturing character-driven quests with cinematic flair and imagination, so the failure of Noah is a curious conundrum. How did it ever come to this? Aside from the inspired designs of the Watchers and the somewhat feeble attempts to internalize the protagonist’s struggles, this big-budget stinker is awash with bad acting and soggy sentimentality. Aronofsky’s regular cinematographer Matthew Libatique pulls off a few nice shots and a quick-cutting style used to traverse wide expanses of land is kind of neat, but this revisionist take on the bible story simply deviates from one text so it can further explore the process of recycling Hollywood platitudes. Noah’s animals came in pairs, but let’s hope Aronofsky’s creative stumbles don’t follow suit. 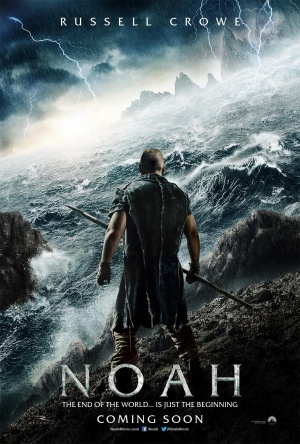