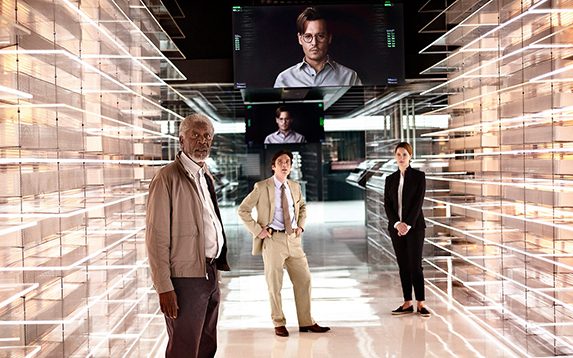 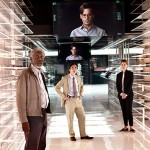 Science-fiction fans are no strangers to tales of artificial intelligence, and even the average film-goer has had his share of computers gone wild. These films range from thought-provoking and thrilling (films like “The Matrix,” “2001: A Space Odyssey”) to enjoyably fun and entertaining (I’m thinking of “War Games” and “The Terminator”) to downright awful and campy (“Virtuosity” and “The Lawnmower Man,” anyone?). Yet, I don’t think I’m alone in expressing my exasperation that new iterations of AI on film aren’t doing their job to stretch our ideas about the future of computer science. Transcendence, by title alone, made me hope that we could ascend above and beyond the traps of a basic summer sci-fi movie about our reliance on technology and the inherent danger that goes along with it. Even with Christopher Nolan as producer, Morgan Freeman and Johnny Depp as crowd-pleasing acting draws, and cinematographer-turned-director Wally Pfister at the helm, Transcendence just doesn’t, well, transcend.

Will Caster (Johnny Depp, “The Lone Ranger“) is a brilliant scientist who’s leading the charge on artificial intelligence; his and his wife’s work focuses on the production of a creative brain — one that exhibits emotional expressiveness and self-awareness. They, with support from their friends Max (Paul Bettany, “Priest“) and Joseph (Morgan Freeman, “Last Vegas“), are aiming to create a technology that can be used to save the world through medical breakthroughs and environmental conservation and rescue. However, Will is shot at a public appearance while AI labs (including Joseph’s) all over the country are simultaneously attacked. A group of “tech-terrorists” called RIFT (Revolutionary Independence from Technology) has made it their mission to stop AI from becoming any more powerful than it already is. Caster is shot with a bullet laced with polonium, and suffers from radiation poisoning. In his remaining few weeks, Caster’s wife Evelyn (Rebecca Hall, “Iron Man 3“) and Max scramble to salvage his being — namely, they find a way to upload his consciousness into their project supercomputer.

Eager to hold onto her husband and continue their research, Evelyn fights against Max’s dire warning that “it’s not really Will” and uploads him online ensuring he can’t be deleted or destroyed. He also can’t be controlled. Hiding out in an underground data center in the desert (because doesn’t everybody have the ability to build one in their very own town?), virtual-Will makes huge leaps in medicine and biotechnology before getting a little too big for his virtual-britches, wanting to expand his power beyond just his cozy confines. To help with this effort, Will begins putting together an army of those whose lives he’s improved with his advances to fend off RIFT (led by Kate Mara) and the FBI, led by Agent Buchanan (Cillian Murphy, “In Time“). 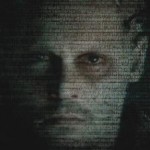 Unfortunately, Transcendence doesn’t add anything new to the cinematic battle between technology and humanity. The same questions regarding consciousness, a higher power, the human soul, and medical morality are dusted off, dragged out and presented in a muddled manner. The barebones script by first time scribe Jack Paglen has lofty ambitions to tackle them all but doesn’t manage to successfully answer a single one. Even the likes of Johnny Depp, Morgan Freeman and Cillian Murphy can’t do much to make the material engaging or make us really care about what happens next. Lost too is the touching love story between Will and Evelyn which lays at the core of the film, ditched in part due to the lack of believable chemistry between Depp and Hall, and for the chase for the almighty thrill.

What we’re left with is just another mildly interesting yet haphazard tale that’s vaguely reminiscent of “Invasion of the Body Snatchers” (which is, of course, a classic) and “The Lawnmower Man” (which, of course, isn’t). This won’t be joining the ranks of the thought-provoking, thrilling sci-fi films mentioned earlier, and I’d venture it’ll probably just be forgotten, as it’s not even bad enough to join the ranks of the awful and campy ones, either. Note to studios: If you’re going to make a film of this nature, at least try to do something different — challenge our beliefs and our comfort zones, not our ability to stay awake in the theater. 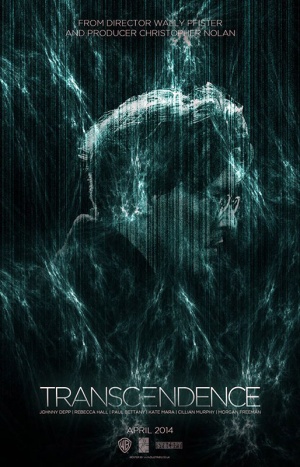