After a good long night of drinking, I finally sat down to watch what some are calling one of the best movies this year to come out of Hollywood. I’m obviously talking about the latest offering by the Wachowski brothers — V for Vendetta.  The movie based off of a UK comic book of the same name follows the doings of a masked man who works to enact a change in his fascist government by all means necessary — generally with the killing of government officials and blowing shit associated with the government into pieces.

V for Vendetta stars Natalie Portman (one of my favorites even if she helped ruin the prequel “Star Wars” movies) as a young woman who realizes her strength and potential to create change only when she is saved and ultimately reconditioned by the “terrorist” known as V.  V is played brilliantly by none other than Hugo Weaving (you may remember him as Agent Smith from “Matrix” fame). Together they feed off of one another to expose a corrupt, fascist government and do all within their power to get their brainwashed, asshole fellow citizens to rise up and revolt.

Without a doubt V for Vendetta initially presents itself as a liberals wet dream.  Power to the people.  All encompassing government is bad.  It is rather obvious the movie is meant to show the future of America.  A highly conservative government, driven by religious zealotry, attains and holds power by strong arm tactics and fear — and only upon a revolution will things change (it is rather funny however, that in the movie America “was” a country and what is left is currently going through a revolution). However, although the movie does indeed have these overtones, it isn’t presented in a “fuck you, sheep” kind of way. The viewer is emotionally moved and the deeds done by V aren’t as politically motivated as they are personally motivated by revenge. It is really well put together.

As stated before, Natalie Portman is a pleasure to watch. She is cute with long flowing hair and with a shaven head. Here she is in her element and it is clear she grasps onto the material — something she clearly didn’t do with some of her latest film roles.  The cinematics are very dreary and give the feeling of woe and sorrow. The soundtrack is well chosen — it invokes good feelings (I found myself humming the Benny Hill closing theme song for days) and almost presents an escape from the day-to-day hell the UK citizens are going through.

Of course there is minor downside, which luckily doesn’t hurt the overall presentation of the movie. For the most part, V for Vendetta has been done before. The movie follows the same principle as “1984” and “Pig Farm”. It points us towards an “A Clockwork Orange” future. Hell, as said before, just think about all the conspiracy theories swirling around the Bush White House today (several are mentioned in the movie) and then just fast forward and substitute a British Prime Minister. Viola! Not very original, is it?

That being said (a movie doesn’t have to be original to be good, but it does help), I strongly suggest at least one viewing of the movie. V for Vendetta probably won’t spur you to do great things with your life, but it will make you take a pause and realize how truly fucked up our present world is and how much more fucked up it will be if a change doesn’t come (two more years people!). 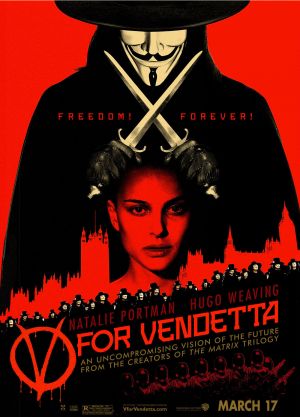