While the wife and children slept today and after the final conference call I cleared a bit of time to watch The Benchwarmers. This is the latest offering from our good friends at Happy Madison (Adam Sandler’s production company), and it shouldn’t be much of a surprise when I tell you the movie was utter shit. Sandler’s team obviously figures that if you throw enough horse shit against a wall something will be work. And at times it does work for them — “Happy Gilmore,” “Big Daddy,” “Deuce Bigalow: Male Gigolo” and “Joe Dirt” to name a few. But more often than not a royal fuck you like “Little Nicky,” “Grandma’s Boy,” “Mr. Deeds” comes our way. The Benchwarmers simply adds to the great list of “up yours asshole.”

For those still reading this review, the movie is a comedy which empowers the dorks and geeks of the world to stand up and realize that they too can overcome the jocks and bullies at their own game — in this case baseball. However, the twist is Rob Schneider, David Spade and John Heder, all grown-ups, take their revenge on the teenagers in the surrounding counties. Could be funny, right? John Heder plays his “Napoleon Dynamite” character to a tee. Oh wait a second, that’s the only character he can play. David Spade is an annoying fucker like he always is. Hearing him whine, makes me want to break a bat across his skull. Rob Schneider is the only one who isn’t particularly annoying in this movie — which isn’t saying much. Cameos by Craig Kilborn, Bill Romanowski, Sean Salisbury, among others, are lost and really make no fucking sense what-so-ever.

The upside to the movie? No fucking idea. The funniest parts of the movie are in the commercials. Everything thing seems forced and there is little reason to rejoice when the top Little League team lets the Benchwarmers team score a run in the final game. I just didn’t give a shit. And c’mon people, three grownups (and only one can hit the ball) against an entire baseball team? Just fucking walk the guy who can hit — you’re guaranteed the friggin’ victory!

Do yourself a favor and skip The Benchwarmers. There are literally 500 more productive things you can do with 80 minutes of your life. You can wash your car, make love to your wife, shoot herion, bake a cake . . . 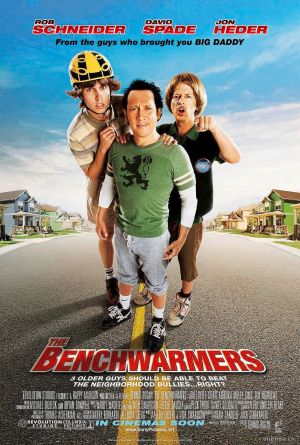