“And I shall rest my head between two worlds, in the Valley of the Vanquished” — Léolo, Jean-Claude Lauzon

Whether Harvey Weinstein’s purpose in producing Lion was to add to his collection of Oscars or just to tell a sweet, heartfelt story about a lost boy searching for his home, the result is that he has probably accomplished both. Directed by Garth Davis (“Top of the Lake,” TV Series) the film tells the moving story of Saroo Brierley, a boy seeking to find his way back to India after having lived for 25 years in Australia, a country 5,000 miles away. Written by Luke Davies (“Life”) and based on Brierley’s memoir, A Long Way Home, young Saroo (Sunny Pawar) is an impoverished 5-year-old boy from the village of Ganesh Talai in the Khandwr Province of India. Insisting that he go to work at night with his older brother Guddu (Abhishek Bharate), he falls asleep at the train station and becomes separated from Guddu.

Frightened, he boards an empty train and ends up in Calcutta, almost 1000 miles away from Guddu, his sister Shekila (Khushi Solanki), and his mother Kamla (Priyanka Bose, “Half Ticket”). Saroo is a strong little boy, yet the fact that he cannot remember his mother’s name or the name of his village and cannot speak Bengali makes him prey for predators. Confused and afraid, he seeks the help of strangers, looks for places to sleep, and has to escape from a threatening situation. When he ends up at the police station, he is sent to a crowded and oppressive orphanage where, with the help of a compassionate social worker, he is fortunate enough to be adopted by Sue and John Brierley (Nicole Kidman, “Just Go with It” and David Wenham, “300: Rise of an Empire”), a loving family in Hobart, Tasmania.

Here he must forget about his old family and adjust to a new home and a new country. A year later, the Brierley’s adopt another Indian boy, Mantosh (Keshav Jadhav), but this time they are not as fortunate as Mantosh has both physical and mental problems. Jumping ahead twenty five years, Saroo (now played by Dev Patel, “The Man Who Knew Infinity”) has gone to Melbourne to study Hotel Management but his memories are reactivated when the Indian food served at a party thrown by his girlfriend Lucy (Rooney Mara, “Carol”) bring back thoughts of his family in India. It is now 2008 and the introduction of new Internet technology such as Google Earth allows him to believe that he might, after all these years, be able to find his way back home.

Grateful to his new mom and dad who raised him, he has not told them of his background for fear of hurting them. Now that he can see a path back to his roots, his conflicting emotions make it doubly hard for him to communicate. When Sue finds out about his past, however, she is happy for him and wants his real mother to know how well he has turned out. In one of the most poignant moments of the film, Sue tells Saroo about a vision she had when she was younger that led her to adopt children rather than have her own. It is a moment of pure transcendence.

The story that eventually takes us back to Ganesh Talai might seem far-fetched and manipulative if it were not for the fact that it actually happened. Though Lion has its flaws and is hindered by a failure to probe deeply into the inner life of its characters, the performances, especially those of Pawar and Patel, are so convincing that the narrative comes across as completely believable. While the film has emotional highs and lows that may induce copious tears, a fact that some of our more cynical critics will not hesitate to point out, Davis trusts his audience enough to keep the maudlin aspects of the film to a minimum and respect the humanity of its characters. 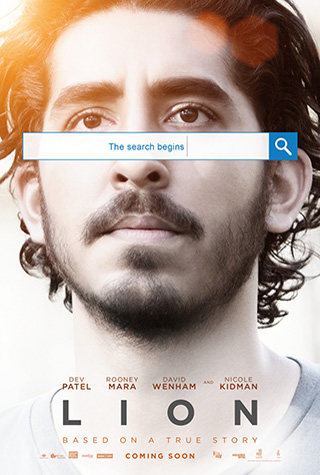