What’s the square root of a relationship? I’m no math master, but the enjoyable Sam Cooke soothingly answers this in a way with his hit song “Wonderful World” with the lyric:

And without two, it’s just you. Sure, singleness has its self-sufficient and seemingly boundless benefits. But togetherness brings an otherworldliness atmosphere that can change you forever. Because in situations like this, experiences are shared; no matter how rewarding or painful they are.

Without experiences, there’s no gain in the understanding of anything you face. Especially when you have a plot where gaining knowledge and making breakthroughs is predicated on teamwork. Writer-director Matthew Brown (“Ropewalk”) delivers this in his film The Man Who Knew Infinity. It’s based on the true story of Srinivasa Ramanujan, an Indian mathematician, who heads to the University of Cambridge to work with the highly regarded English mathematician G.H. Hardy in the early 20th Century. This was a film that took Brown twelve years to make and based on the narrative choices throughout, I can see why.

At its core, this is a love story. Not in the romantic sense or even a traditional buddy movie tone, but a coming together of two different people (played by Dev Patel and Jeremy Irons) for a worthy cause. It’s truly hard to believe that it’s been eight years since the release of the exhilarating Oscar-winning film “Slumdog Millionaire,” which has continued to grow Patel’s fortune with more roles, including last year’s sci-fi flick “Chappie.” His co-star, Jeremy Irons, is a decorated veteran actor, who recently served as Bruce Wayne’s right-hand butler in “Batman v Superman: Dawn of Justice.” But to me, he will forever be known as the voice of Scar in the Disney classic “The Lion King” (seriously, you won’t believe how many times I reminded myself of that while watching this movie).

Though Patel and Irons are both likable in their roles, no one has a transcendent performance that elevates this story. Patel does a decent job and delivers what the story calls him to do. However, Patel is performing against Irons, a man who has acted much longer and more profoundly than him. This situation presents an uneven dynamic, which ends up hurting the film since its energy relies on multiple subdued dramatic scenarios. Truthfully, the relationship between Hardy and Ramanujan is the main reason for anyone to connect to this tale. And sure, it may be close to how it played out in real life, but it’s executed in a way where it’s unable to fascinate us. Since the relationship is mostly based on writing formulas in dark rooms, the end result is an awkward dance between strangers. Similar weaknesses also extend into the subplot, which involves Ramanujan’s wife Janaki, (Devika Bhise, “The Accidental Husband”) and mother (Arundathi Nag, “Andar Bahar”). Several opportunities were missed in showing the parallels of these storylines that reflected the stakes and deeper issues within Ramanujan’s family.

Stylistically, the story aims to offer up other understated merits. When dealing with the subject of math, the film takes a conscience measure of not being another “A Beautiful Mind” copycat by overpowering us with unnecessary visual effects or heavy-handed musical scores. Unfortunately, the story fails to provide an alternative method of getting inside the head of a genius. It’s commendable that Brown wishes The Man Who Knew Infinity to be as realistic as possible, but it’s unable to make math visually interesting. With all of the different sociological topics that the film touches on, we only get to know these characters from a distance. When that happens, it’s hard to share the aches and pains with these characters as they face it. All of the topics covered are relevant, but never get fully explored. And although the movie is under two hours, most of it is just the back and forth process of Ramanujan proving his math skills to the skeptical Cambridge professors.

With all of that noted, it must be stated that there’s no easy equation as to how you can make a hit movie. Sometimes, you have to create the unexpected and surely, The Man Who Knew Infinity has some elements to reach an audience beyond history buffs and adults over the age of fifty. And while nothing in the film is mind-blowingly memorable, its shine on history did cause me to investigate the period of Hardy and Ramanujan’s relationship. Even with this earnest cinematic effort, The Man Who Knew Infinity doesn’t fully work in this medium. Obviously, it deals with an intellectual subject, but it doesn’t add much to the complexities of friendship; just a common variable that unlikely pairings happen. It prides itself as a movie that shows proof of all the hard work it does. However, it lacks the magic it needs to make intuitive storytelling whole.

'Movie Review: The Man Who Knew Infinity (2015)' has no comments 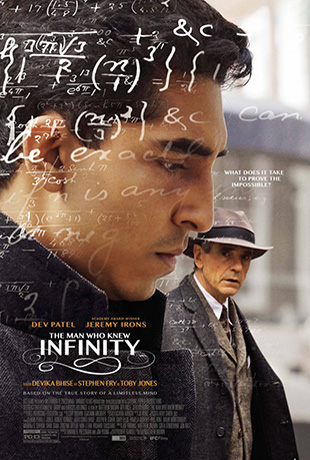