Choice. Consequence. Color. Cats. These and more make up the palate of Welcome to Happiness, a quirky and charming fable from debut writer-director Oliver Thompson. Blending Wes Anderson-esque quirkiness with a light spiritual touch, Welcome to Happiness uses bright visuals, a likable cast and delightful music to weave its tale about the choices we make, the regrets and nostalgia we view them with, and how these choices influence our future.

The film opens with children’s author Woody (Kyle Gallner, “Beautiful Creatures”), stuck on his latest book on the line “But then . . .” This notion of what happens then pervades the entire film, as Woody performs a bizarre sort of interview with Leah (Bess Rous, “Murder in the First” TV series). This set-up may lead the viewer to expect that the film is a weird metaphor for the afterlife. But Welcome to Happiness is far sharper than such a blunt analogy. Instead, it quickly becomes clear that this is our own world, with a colorful collection of characters inhabiting a contemporary American city. Woody and Leah are only the beginning, as we are quickly introduced to Woody’s neighbor Trudy (Olivia Thirlby, “Dredd”), a deeply unhappy artist Nyles (Brendan Sexton III, “Seven Psychopaths”), a pair of distanced brothers Ripley (Josh Brener, “The Internship”) and Penley (A.J. Trauth, “The Last Word”), the more-than-slightly manic Proctor (Keegan-Michael Key, “Keanu”) and his associate the hippy-esque Lillian (Molly C. Quinn, “We’re the Millers,” who also executive produces), and the mysterious Moses (Nick Offerman, “Me and Earl and the Dying Girl”) who knows more than anyone else but is not forthcoming with explanations. As we follow Woody, his blossoming romance with Trudy and increased questioning of his role and place in the world, the film delicately cuts between his arc and that of Niles as well as Ripley, who intersect with each other and then with Proctor and Lillian. Further connections are regularly suggested but rarely confirmed, Thompson implying rather than explicating the subtle connections between these and other people.

With its cunning conceit of the consequences of connection, Welcome to Happiness might be as irritatingly arch and self-congratulatory as my alliteration, but Thompson avoids this with characters that are warm and affectionately drawn, presenting within a sprightly and energetic visual style. Woody is an endearing protagonist, a pleasant, smart and friendly young man who is neither twee nor grating, the books that he writes as charming as the vividly painted apartment where he lives. Parents might well wish they could obtain his books for their own children. Niles, who could easily have been too much of a moaner, is also sweet and sympathetic. Trudy is a spiky and sexy girl-next-door, and Ripley is also engaging. Proctor and Lillian are used sparingly, which is wise as they are just weird enough to quickly become annoying. Within their brief appearances, Proctor’s hysteria over a sketch is a comic highlight that demonstrates the infectious power of laughter.

Stylistically, the film is vibrant and lively. Patrick Thompson’s production design is intricate but never overwhelming. A particular highlight is the murals of Woody’s apartment: Startling, eye-catching designs that, like so much of the film, suggest but do not confirm. Proctor’s house is similarly vivid, books and intricate carpentry blending together in an exquisite and almost organic architecture. This helps to convey the film’s theme of connection — the physical locations convey this theme as much as the story. Thompson’s direction is similarly expressive — many conversations appear in two-shot, with the characters asymmetrical but still creating balance in the frame. Cinematographer Justin Talley frequently utilizes deep focus so the orderly mise-en-scene can be enjoyed as much as the effervescent dialogue. At times, Thompson prolongs a take when another party enters the scene, panning across the location rather than cutting, which again conveys a sense of connection — this new entry is part of what is going on, another link in the ongoing chain of cause and effect.

Clockwork precision is key to the success of Welcome to Happiness. Narrative and thematic motifs are foreshadowed and returned to, leading to various “Aha!” moments as the viewer realized why a character made THAT reference and why THAT visual element was centered. Beautifully, these motifs are purely revelations for the viewer, not the characters, making the dramatic irony all the thicker but also ambiguous. Maybe the various characters are connected in a “Magnolia,” “Babel” or “Crash” sort of way, or perhaps they are not. By not explicating these aspects of the narrative threads, the film resists heavy-handed symbolism or preachy messages. Although there are several amusing moments, the film is not laugh out loud funny, relying on charm and the viewer’s willingness to go with it. Some may find the quirky light touch aggravating, but if you allow the film to take you by the hand, then you might like where it takes you. A welcome into happiness is not a chance for revenge or even closure, but an opportunity for redemption and moving on. And there are some great moments for cat lovers as well.

'Movie Review: Welcome to Happiness (2015)' has no comments 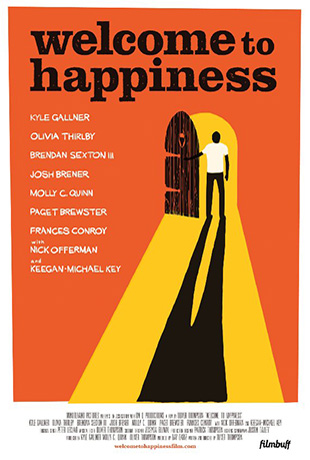