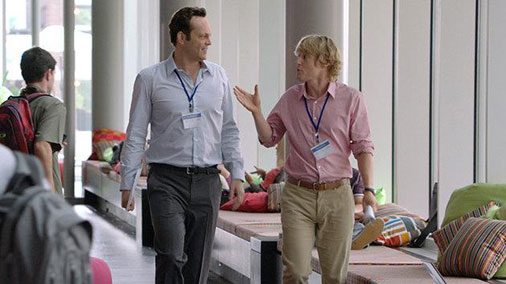 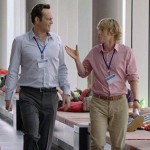 Making people laugh today must be the most difficult task in the world, much like a conservative winning a Nobel Peace Prize or a baseball player pulling off an unassisted triple play. Just look at some the recent comedies that have tried and failed: “Identity Thief,” “The Incredible Burt Wonderstone” and “The Hangover Part 3.” (“Fast & Furious 6” was actually hilarious, only unintentionally).

And while there is some wit, heart and originality in the first teaming of Vince Vaughn and Owen Wilson since 2005’s “Wedding Crashers,” the Shawn Levy-directed The Internship, is ultimately betrayed by over-sentimentality, a longer then necessary running time and a void of real yuks when the game is on the line. Even the duo’s patented self-awareness and laid-back demeanor cannot get them out of this two hours commercial for Google, one of the most conspicuous corporate entities of the last 20 years.

Vaughn, as co-writer, however, has to shoulder some of the blame. He and collaborator Jared Stern are so sure that viewers will really dig the annoying techspeak, the overachieving (yet socially retarded) nerds and ridiculous contraptions at Google’s San Francisco headquarters that opportunity for some real laughs is overlooked. The inclusion of one-dimensional, clichéd characters — a smart Asian that gets wasted for the first time, straight out of “Revenge of the Nerds” and then rehashed in “21 and Over,” a perky Hispanic girl who doesn’t have boyfriend, a fat guy that’s picked on, etc. — and an awkward romance between Wilson and Australian ice queen, Dana (Rose Byrne, “Bridesmaids“), that we could see from a mile away does not aid the cause, either.

Plotwise, two top wristwatch salesmen, Billy McMahon (Vaughn) and Nick Campbell (Wilson) find themselves out of a job when boss John Goodman (“Flight“) decides people do not trust his product any more. Left with nothing after losing his home and girlfriend, Billy talks Nick into applying for an internship at Google, the little search engine that could. Despite the fact neither has any computer or technical skill they nonetheless are accepted into the program that could lead to full-time employment.

Now, The Internship becomes a fish-out-of-water story with the middle-aged twosome attempting to connect not only with modern technology, but a generation of vidiots and geeks that are computer savvy but have no clue how to deal with real world situations all while trying to please their uptight Indian boss, Mr. Chetty (Aasif Mandvi, “Movie 43“). It then shifts gears and turns into a series of team competitions that we have seen in a dozen or more (often better) movies, including “Nerds,” “The Hunger Games” and “Bad News Bears,” as Billy and Nicky are added to what seems like a collection of losers led by überspaz Lyle (Josh Brener, making his feature film debut after appearing in “The Big Bang Theory” and a few other TV series). 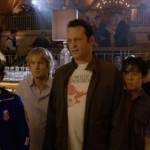 Lessons at the pub.

Asked to debug a computer program, create an app, play a game of quiddich or make a big sale, the geeks are also constantly being one-upped by the snobby Graham (Max Minghella, “The Social Network“) and his hand-picked group of ringers. Can the folksy Billy and Nick mold their uninitiated young charges into a winning combination and secure high-paying jobs for everyone? Will Nick and Dana get together? Can Graham ever be defeated? Will audiences ever really laugh again?

Sadly, not so much from this film, which gives most of the jokes away in the trailer and wastes cameo appearances by Rob Riggle (“21 Jump Street“), Gary Anthony Williams and has an especially excruciating take by Will Ferrell, whose stock seems to be falling as fast as Adam Sandler’s.

I really wanted to like The Internship and, at times, I thought it could actually be salvaged, but it didn’t seem to know where to end nor did it know true funny, so it came up short just like the above-mentioned efforts. The last real witty film that had genuine laughs was the turn of the zombie tale, “Warm Bodies.” It’s sad that we may have to resort to a hybrid horror genre to truly giggle again. 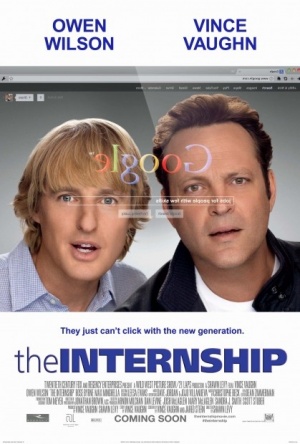