Cameron Crowe’s latest film, Aloha, his first larger scale project since 2011’s “We Bought a Zoo,” does not, unfortunately, come with the zest and alacrity of it or some of his earlier better works, like “Jerry Maguire.”

It is light-hearted, well-intentioned (Hawaiian virtues are espoused) fare tailored to an audience that sees space as something inscrutable. But while it is cast admirably, Aloha is painfully lacking in depth and narrative structure, and suffers from poor pacing and characterization choices. The dialogue is airy and unconstrained, making everything seem redundant. What’s more, there is a general aura of ethereality — the characters seem to jump from cloud to cloud, immersed in this overly metaphorical language. And once there they seemingly never come back down to Earth, which is a strange juxtaposition, for the characters pretend to know almost everything there is to know about space and technology, yet at the same time, they are too distracted — even suffocated — by its uncertainties. It’s basically a situation in which Crowe, who directed, produced AND wrote this film, simply overplayed what are generally considered his strengths.

At its heart, his film endeavors to show the redemption of a man once too cynical to grasp the real meaning of life. He is Brian Gilcrest (played well enough by Bradley Cooper, “American Sniper,” in a hollow role), a defense contractor who was once a military consultant with NASA, and gravely injured while on assignment in Kabul, Afghanistan. Now better and back in the mix, he is sent to Hawaii to oversee the launch of a weapons satellite, the first act in what is supposed to be many, at militarizing space.

The business magnate behind this move is Carson Welch (Bill Murray, “St. Vincent”), an aging millionaire who wants to “protect his country” by sending rockets and satellites up into space. The military is contracted to help Mr. Welch actualize this goal. Unbeknownst to the military brass — which includes Colonel ‘Fingers’ Lacy (Danny McBride, “This is the End”) and General Dixon (Alec Baldwin, “Still Alice”) — Welch has weaponized the cargo hold. While overseeing this secret mission, Gilcrest encounters his former lover, Tracy (Rachel McAdams, “To the Wonder”), who is enduring the hardships of a broken marriage with John ‘Woody’ Woodside (John Krasinski, “Big Miracle”). Tracy once again has the hots for Gilcrest, but he is now smitten by the overly-optimistic fighter pilot, Allison Ng (Emma Stone, “Birdman”).

Tangled in this web of confusion is a rate of revelation too fast for audiences to follow, as background mixes with exposition and establishing shots, serving up some really sour screen moments. Cooper and Stone are pleasant in their roles, but it’s like they are pulling at an invisible leash, waiting to leap from the unrealistic dialogue and beaten genre clichés. A surprisingly agile Bill Murray as the pivotal mogul is fun to watch, especially in a scene on the dance floor with Emma Stone. Also, a scene with insight on “guy talk,” between Krasinski and Cooper is a delight. Other than that, though, the screenplay falls flat on its face, begging for someone like Alexander Payne (the director of “The Descendants”) to pick it up and run with.

The production values are also passable, as the picture includes neat vignettes of space travel and early Hawaiian life. The music from Jónsi & Alex is also pleasing, but these guys, along with cinematographer Eric Gautier, could have evoked the most transfixing cinematic world, and still, Aloha would be stuck behind the annoying stylized dialogue and the lofty motifs that never realize their loftiness. Plus, the subtext of “White Man’s Burden” in Hawaii is haphazardly portrayed, and the apparent desperateness of “independent” Hawaiians is somewhat hard to watch.

So, even though the progression of Gilcrest’s character is, by most accounts, a positive one, and the film boasts some mesmerizing frames of the truly sublime Hawaiian Islands, Aloha pales in comparison to other movies of similar ilk, such as David O. Russell’s “Silver Linings Playbook.” And while Crowe will still remain Hollywood royalty because of the success of his early films, Aloha will by no means find itself in “Jerry Maguire,” “Almost Famous” or even “Elizabethtown” airspace. In fact, when compared to them, it never left the ground. 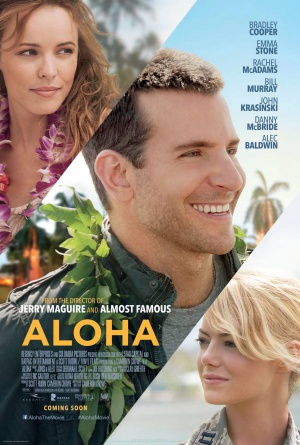