Director Cameron Crowe has finally emerged from his cocoon — seven years after the abysmal “Elizabethtown.” Yes, he has had a couple of projects in that time, notably the Pearl Jam documentary, but he has avoided anything related to his dramatic film roots of which produced “Say Anything,” “Jerry Maguire” and “Almost Famous.” With We Bought a Zoo, he returns to form to deliver a feel good, family appropriate, sentimental crowd-pleaser that should play very well to the holiday crowd.

Please know I do not use the word “sentimental” as a derogatory term. Sure there are plenty of moments where the actions and dialogue seem contrived and manipulative, but some of the best crowd-pleasers throughout Hollywood history have had these same traits. We Bought a Zoo is based on a true story and uses Benjamin Mee’s autobiographical book as the basic source material. The real Mee family and their zoo, are stationed in England, not southern California as Crowe presents them. Even with creative liberties and the heavy-handedness of the telling, this version of the Mee family and the zoo staff (including the animals) is interesting and entertaining — even if you just have to let go and allow yourself to be guided through.

Matt Damon plays Benjamin Mee and the story picks up after his wife dies. He soon quits his job and moves his two kids to the country so they can work through their grief and start fresh. His teenage son Dylan is played with blazing anger by the talented Colin Ford. The precocious seven year-old daughter is played by scene-stealer Maggie Elizabeth Jones. This family experiences the realities of struggling with their pain and difficulties in communicating.

As for the zoo — Rosemoor Wildlife Park — it is in major disrepair and in danger of closing if it doesn’t pass its pending inspection. Benjamin works with the rag-tag staff, including head zookeeper Kelly (Scarlett Johansson), to bring the facility up to code and nurse the sick animals back to health. As the zoo is rehabbed, so are the individuals. No surprise there.

The main conflict in the story comes from the hard-headedness of Benjamin and Dylan, as they ignore their inability to communicate and fail to connect as father and son. A couple of their scenes together are the best in the film for acting and realistic dialogue. At the same time, Kelly acts as a quasi-love interest for Benjamin, while Lily (Elle Fanning) uses puppy love to help Dylan through his misery. That sub-plot is where Crowe missed a real chance. Ms. Fanning is one of the top young actresses working today and her contributions here are limited to nothing more than her luminescent smile.

The wild cast of supporting actors includes wise-cracking Thomas Haden Church as Benjamin’s brother, JB Smoove as the realtor, Peter Riegert as Mee’s editor, and Patrick Fugit (from “Almost Famous”) as the guy with a monkey on his shoulder. Angus Macfadyen as the colorful zoo maintenance man, and John Michael Higgins as the snooty zoo inspector who knowingly holds their future in his smarmy hands, round it out, and all are very good at filling the film’s requisite antagonist, comic relief and support system needs.

As always, Crowe uses music better than most any other director. This includes his use of score and soundtrack to compliment a scene or drive the setting and mood. What really makes this film work, however, is Matt Damon. His character is the heart of the film and the soul of the family. He makes us care for him, his family and the zoo, and his performance alone is both strong enough to prevent We Bought a Zoo from lapsing into pure sap (something it desperately wants to do) and engaging enough for me to recommend seeing it. 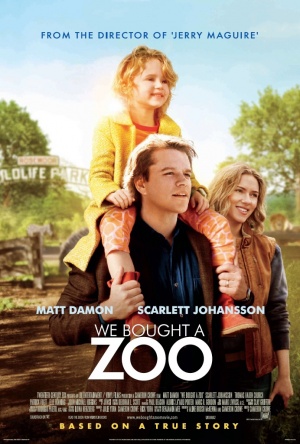