You’ve probably been through it: You’ve just managed to make your way through your pockets and reached six to seven quarters in the midst of keys and keychains and used gum wrappers, get them into the coin slot of the vending machine, anticipating with your wet tongue the promised relief of your favorite snack when . . . SNAP! . . . the shitty bag gets stuck and your sense of anticipation quickly moves to anger and you find yourself hitting the Plexiglas, shaking the machine to make it release the snack you are entitled to, and kicking the bottom drawer for some justice you will never get. The snack just stays there. And you in front of it. Disappointed. Angry. Hungry. Now how much shittier would this be had you just lost your significant other in a matter of nanoseconds in a fatal car crash of which you, inexplicably, came out uninjured. Yet somewhat hurt. At least quite numb.

Would this be grounds enough to write your life-story to the customer service employee on the receiving end of your complaint about said vending machine? A someone you don’t even know whether they will read your load while concurrently filing for a refund you are more than entitled to? Well, for Davis Mitchell (Jake Gyllenhaal, “Southpaw”) this is more than enough to let his pen loose in a tell-all complaint that finds a more than receptive ear in the customer service employee, Karen Moreno (Naomi Watts, “Allegiant”), who suddenly starts to play hide-and-seek with him while he tries to grieve his just deceased wife (Heather Lind, “Mistress America”), or just tries to feel anything at all — something that, according to him, he hasn’t been able to do for the last 10 to 12 years. Moreno, a divorcee with a teenage son who looks 12 but is actually 15, who dreams of becoming the David Bowie of happy punk and spends his days doing anything that prevents him from digging deep into his sexual orientation, is not Davis’ love interest, nor is Davis hers; rather, they find in each other a part that they found missing in their lives. He, an experienced woman with a non-judgmental, listening ear. She, a man whose staple honesty makes him look like the wisest prick in Manhattan. And then is Chris (Judah Lewis), Moreno’s son, to complete the compensation triangle, finding in Davis a better father-friend-figure than her mom’s current boyfriend, Carl (C.J. Wilson, “The Intern”), a plain man who owns, among others, the vending machine that started it all and… pretty much anything else. For Davis, Chris is that inner boy who got stuck within and who he’s now doing his best to let out.

It is important to note that Davis’ married life was as aseptic and sterilized as is everything in the financial world. He works at a small bank managing a not-so-small amount of money (okay, it’s 6 billion dollars) as his father-in-law’s (Chris Cooper, “The Muppets”) protégé, despite this latter’s intentions to be one. After his daughter’s death, Phil feels less and less inclined to protect his son-in-law, though, as any good founding partner of a successful financial institution would do, giving him a chance to act normally: To grief, to come back to work and to honor the memory of his only child, in that strict order. Davis, however, does neither.

Instead, Davis goes on a rampage of destruction, becoming a demolition devotee, taking Phil’s advice a little bit too literal: “If you want to fix something, you have to take it apart and put it back together.” Following to the letter these sage words, Davis starts the tearing apart enterprise with almost an obsessive appetite and with the thirst of a true centripetal refurnisher. First the fridge (the last item in Davis and his wife pre-crash conversation), then the door of a bathroom stall in his office, then his office PC, then his house, which is supposedly at the center of the film, Demolition (sorry that this is the first time I mention the title). But the demolition goes on and on and on, and it lags and lags — making it clear Davis has no intention to act on the “put it back together” part. The movie seems to want to prove the point that everything that Davis has built around his life, which is everything he is at that point, his very self, needs to be torn apart so as to put himself back together. How will he know he made it? Easy, he will be able to feel again, have a heart he has not had in half a quarter of a century — an urban tin man beating the shit out of the yellow bricks in the road.

And this is the greatest problem of Demolition: Too many metaphors. “Everything has become a metaphor,” voices Davis where you can almost hear Gyllenhaal himself complaining about Bryan Sipe’s costume-jewelry-script. But it is not how tastelessly flashy it can be as how erratic the nature of Sipe’s narrative becomes that ends up being distracting to the point of losing the viewer’s interest — only to, fleetingly, be recovered by Jean-Marc Vallée’s aesthetical dexterity. Davis’ letters, the narrative mold on which the story is poured, lose all credence by the second act as the central (if unapologetically unsubtle) metaphor takes over, which, by the third act, is just all over the place.

If you have been following Vallée’s interesting career, from his remarkable first important film, “C.R.A.Z.Y.” to his compelling-when-not-borderline-ridiculous “Dallas Buyer’s Club” to his cheeky and bold “Wild,” you would note that he is one searching for catharsis. His central characters are in a perennial hunt of purging themselves by (in one way or another) castigating their bodies. In the case of Demolition (now I’m making up for the times I didn’t mention the movie’s title in the first few paragraphs), Sipe doesn’t dare to follow his metaphor all the way through. Rather, he zig-zags his way through Davis’ destructive impulses and posits in him feelings he totally pulls out of his sleeve. This results in a horrible conclusion that is no way redeemed by the film’s barely appropriate epilogue. The harm, by then, is already done. The script completely castigating its body.

Vallée, unfortunately, is not brash enough to override Sipe’s wary narrative and to take advantage of his excellent lead. Because, yes, Gyllenhaal is both a joy to watch and a shame to see, how the intensity and discipline he disseminates in his character is wasted in a pointless script. He is perhaps the only actor (after Christopher Walken) who can project the inner life of an android, a humanoid who’s enduringly suspicious yet suspiciously endearing (suffice to mention here his disturbingly likable Louis Bloom in “Nightcrawler”). He makes honesty look less like a virtue and more like a programming error. Gyllenhaal is the perfect vessel for Davis, a coreless, careless character doing his best to find feelings of his own but who has numbed himself past the point of repair, doomed to never finishing anything he starts. Had the film kept with the main quality, or lack thereof, of his central character (almost resembling the Ulrich of Robert Musil’s timeless The Man Without Qualities), Demolition would have possessed the cohesion it everywhere lacks. But even Vallée tries too hard to find him a purpose. And where the screenwriter hesitates the director just succumbs, and the last five minutes of the film negate what the former 95 were suggesting. Perhaps the only thing more hideous than a lazy metaphor is a rushed catharsis.

There’s no doubt that Vallée is a great director of actors; he always succeeds at managing (almost micromanaging) the interior lives of his cast. Yet he’s often too timid when taking them to the last consequences. He is, in this sense (as was that other great aesthetician yet mediocre artist, Miloš Forman), more an accomplice than a true witness to his characters, and so he just can’t help but to indulge them and unequivocally find them redemption wherever it may be available before the final act. Sometimes, he pulls redemption out of his ass (i.e., “Dallas Buyer’s Club”), others, he just throws it out (i.e., “Wild”), and others yet, as is the present case, he just goes round-about. 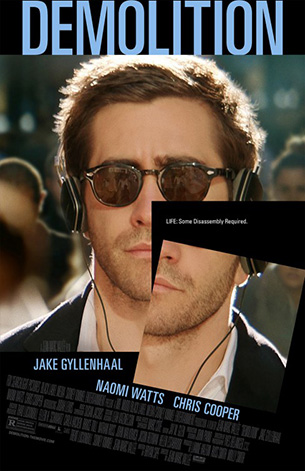