In fiction as in life the secret lies in believing too much while knowing too little. This lack of self-awareness, which often translates in a very low awareness of one’s own environment, can be a blessing in such difficult times as the ones we live in. Naiveté is the closest we can get to innocence, as we all lose it almost at the very moment in which we are born. If there is one thing we can be sure of today is that our innocence is gone at the moment in which our ingenuity takes over our sense of embarrassment. A naïve person is he or she who is aware enough to feel embarrassed yet unaware to the point of not knowing why.

Brooke (Greta Gerwig, “Lola Versus”) and Tracy (Lola Kirke, “Gone Girl”) are two such samples of raw awareness — one in her life and the other in her fiction. So then both are the perfect step-sisters-to-be. Tracy’s freshman year at Barnard is less than what she would have expected. Friendless and at the outskirts of everything, she meets another (but much more integrated) outsider who rapidly befriends her. Tony thus becomes her first candidate for romance till in one shot she finds him hand-in-hand with another girl, Nicolette (Jasmine Cephas Jones, “Fairfield”) who, although overly jealous of her boyfriend’s attention to Tracy, always finds a way to get a hold on him. Brooke, on the other end, couldn’t be any more integrated; after all, “she incarnates New York City.” Overwhelmingly enthusiastic, popular to the extreme yet lonely at her core, almost bipopular (if you don’t mind the neologism), we meet Brooke through Tracy’s impressed eyes. But how is it that Tracy and Brooke don’t know each other and that they are about to meet if they’re about to become step-sisters? This is where the story of Mistress America starts to unfold.

Tracy’s mother (Kathryn Erbe, “Law & Order: Criminal Intent” TV series) is about to marry Brooke’s father, and the two two-membered families are going to get together for the first time during Thanksgiving. While complaining about her lonely college-life, Tracy receives advice from her mother to contact her soon-to-become-step-sister; but Tracy doesn’t feel like taking the first step and ignores her mother’s suggestion. After finding out about Tony and after being rejected by a literary society to which she wants to belong, Tracy finds the nerve to call her “must-be-really-busy-old-step-sister-who’s-like-30” — in the end, she chickens out when she listens to Brooke’s self-confident voice answering her call. So self-confident is she that she calls her back immediately to inquire the impolite caller, and once Tracy reveals who she is, they arrange a first date that develops into an endearing friendship.

But Mistress America is neither about friendship nor bonding, but exactly about the opposite; it is a film about betrayal — even when Tracy, our narrator, opens it by voicing her skepticism about Brooke’s worldview wherein everyone betrays each other. Tracy, however, wants to believe this is not true, but, as the film progresses, we find out she wants to believe much more than she wants to know. The same could be said about Brooke though, despite her rather pessimistic view about relationships (of any kind). As a matter of fact, we find that Brooke is in practice much more of a believer than Tracy could ever aspire to be. And this is what the whole movie is about.

I must say clear and out loud: I’m impressed by Noah Baumbach’s latest film. His previous films, even though they have managed to accrue him a huge fan-base, always seemed incomplete to me. At the end of every one of his movies (from “Kicking and Screaming” to “While We Were Young”) I always got the feeling that a vast void breached at the edge of the story. It’s not that I have anything against voids — after all, nothingness is the new black in our current times. But it does depend on where the void opens. If it is constitutional to the thing (picture, sculpture, painting, book, joke, film . . .), existential you may say, then this void opens from within, largely from its center, and expands to all its edges. However, when the void is to be found only at the edges of the thing, if every part is filled with content and so it is supposed to be, only to find that a big void opens right at the end of it, then I feel cheated or, sometimes, as with Baumbach’s work, dully disconcerted.

With Mistress America, nonetheless, Baumbach’s void at the edges feels finally mended. And now I can explain to myself why this one film achieves what the other ones just intended. The dialectical dynamic he always tries to set in his scenes amidst actors and spaces, and amidst characters and lines, is all framed inside a constitutional bitchiness that is constantly reflecting and bouncing from one character to the other and to everyone involved in the scene, the sequence, the movie. Inside this bitchatorioum, everyone is eliciting their own self-awareness by way of the other. There is no dialogue in Baumbach’s films, for no one really listens to anyone else — there is only dialectics: A bouncing thesis, antithesis and synthesis consistently leaping and jumping, rarefacting upon the other, every other . . . who is every body.

Yet, there was always some character(s) who was aware all the way about their own bitchiness, about their own participation in the building of the bitchatorioum of which they partake. Even in what was perhaps Baumbach’s (again, with Gerwig’s collaborative pen) best film so far, “Frances Ha”, there is a point at which we realize that Sophie, Frances’ best friend, is but a selfish bitch who very well knows which are Frances’ weaknesses so as to remorselessly take advantage of them — the dictionary definition of a bitch. What makes Mistress America such an accomplished film is that we enter into a world in which everybody, yes, everyone is a bitch; they all are bitches and leeches and, at the same time, they all are kind and genuine. Not an easy task if I may interject.

Every character in this movie seems to be leeching their own self-awareness from the acute observation of their environment. More particularly so Tracy, who uses her experience with Brooke (her way from awe to disappointment) as a source to write a story that might give her credence and entrance in the literary society she so much wants to be part of — regardless if they are, in Tony’s words, “just a bunch of douchebags.”

Thus Tracy seems more a decorator of her own life than a person who really lives it — a writer indeed. She is the kind of person who’s willing to sacrifice her experience in order to get herself a good story, a good character, a good fiction in which she can insert her own personhood. As a recurrent spirit says (through the body of a recurrent medium), she is not in herself, rather she is “five feet to [her] left and unhappy.” In Mistress America, Baumbach’s movie and Tracy’s short story (from a title she borrowed from Brooke without her consent), everyone is a character in their own lives — but never a character of their own making.

Unlike the screwball comedies to which Mistress America has been insistently compared (those immortal Howard Hawks, Leo McCarey or Preston Sturges’ masterworks of levity), Baumbach’s work channels this subgenre by way of its more contemporary detours. The first one, and most obvious perhaps, is the work of who is admittedly his biggest influence, Whit Stillman, and more precisely his first (and likely best) film “Metropolitan,” wherein Whit honors his given name with the lines he gives to his actors to deliver. The second detour would be a little older, but much more influential: Woody Allen’s “Annie Hall.” Actually, the ending scene of Baumbach’s film is almost a replica of Woody Allen’s classic denouement — with, doubtless, a different tone and turnout.

“Annie Hall” made unhappiness hip. Its working title, “Anhedonia,” actually refers to the (clinical) condition of being chronically dissatisfied. Woody Allen (a substantial sufferer of this ailment) saw what in today’s metropolis couldn’t be more tangible: No one can really aspire to be happy — the most one can aspire to is to be content. Brooke (delivered by Gerwig’s demi-perfect incarnation of hip neurosis with impeccable instincts and sense of time) is the paradigm of contentment. As Tracy observes, she’s doomed to failure, but unlike Tracy, she’s not fated to unhappiness. Brooke’s best asset is that, unlike everybody else around her, she’s not obsessed with success (actually, she fears it) — her only true desire is the incessant search of moments of true happiness (which is what everyone around her seems to fear). Her naiveté is therefore a bliss. Where she seems oblivious of her environment she also seems to be the only who’s not leeching her self-awareness out of others’ travails — she couldn’t care less about being self-aware, as she’s continuously reaching a state of self-completion. She does so, nonetheless, at the expense of absorbing everyone around her; she’s a gigantic gravitational force that sucks everyone near her — a black hole.

But please don’t be mistaken, Brooke’s self-esteem is a hundred percent dependent on the steam she gets out of her self, that enthusiasm that keeps her soul (and her mouth) moving. Of course, you get the growing feeling that should she run out of steam she could actually be suicidal; yet she also strikes you ceaselessly with the impression that she will never run out of steam — that this is something she can find almost everywhere she is. Impressions, however, are not too often accurate. They are, nonetheless, extremely effective as short-term devices for decision-making. These are the kind of decisions everyone around her do when they’re grabbed by her gravitational pull (into her navigational pool). There’s the exception of her nemesis, Mamie-Claire (Heather Lind, “The Weekend”), but even she was once a friend of hers.

In the end, the counterpointing relationship between Brooke and Tracy in Mistress America makes a clear distinction between failure and unhappiness, and therefore between happiness and success. Happiness is a state that is not even reachable in fiction, not even in wishful thinking, for no one is innocent enough to be truly happy. Self-contentment is the best we all can do. But that doesn’t mean the search should be given up. That shouldn’t mean we should settle down at the first available chance. On the contrary. If failure stops being at reach at the moment in which you stop searching for success, happiness is only unreachable when you stop searching for it. 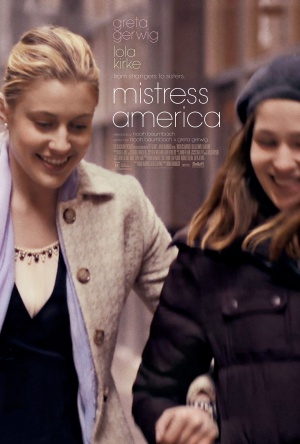