In Listening, Caltech grad students David Thorogood (Thomas Stroppel, a series of short films and minor TV appearances) and a ridiculously bald Ryan Cates (Artie Ahr, “Immigrant”) have been developing a headgear device that facilitates mind-reading by stealing university equipment and hiding it inside David’s garage to conduct unauthorized experiments (think of a teenage Steve Jobs, only with more scruples). Much to David’s dismay, however, womanizer Ryan gives Jordan (Amber Marie Bollinger, “The Activist”) a tour of the makeshift lab, and she unexpectedly assists in their breakthrough when her suggestions help turn the device into a telepathy machine.

They subsequently invent a method of transcribing a person’s thoughts into data, which can then be interpreted, allowing an operator to “read” the subject’s mind. But they hit a roadblock: The human brain’s infinite complexity renders attempts to decode the data quickly impossible. Realizing that only a human brain can interpret a human brain, they develop a technique to transmit thoughts directly from one person to another.

Unfortunately, the CIA, which has been unsuccessfully testing a mind-control machine finds out about David and Ryan’s work, because of a spy (we won’t tell you whom, though, wink, wink). Of course, anyone who has ever seen a motion picture will realize that early scenes showing stone-faced military men trying to mind-control subjects into killing each other give away the fact that the military will get involved, and that the film will inevitably lead to David and Ryan being captured. The agency promptly kidnaps them, makes a job offer they can’t refuse and then, to ensure the secrecy of the project, uses their creation to monitor the thoughts of everyone involved.

Meanwhile, David’s home life with depressed wife Melanie (Christine Haeberman, “Long Live the Dead”) and daughter Lana (Mykayla Sohn, “The Chosen”) is falling apart, prompted mainly by his attraction to Jordan, who is in turn romantically involved with Ryan. There’s also an attempt at social commentary about the government using technology to eliminate free will, with one of the main characters finding it morally repugnant, while another argues that humanity would actually benefit.

Director/screenwriter Khalil Sullins makes a feature debut with his audacious sci-fi thriller that attempts to be as engrossing as it hopes to be thought-provoking. Exploring the technology that will no doubt make mental telepathy a commonplace occurrence and that it’s a world we probably don’t want to live in. The film, which premiered at the 2014 Woodstock Film Festival and has since made its film festival run, may mark its creator as a talent to watch, but not for this vehicle. Listening is a character study that is driven by a science fiction plotline and is dragged down by unpleasant characters and much confusion and attempts to be “Brainstorm” without the writing or acting level involved in that project. And no one with ANY academic knowledge will believe that David and Ryan have the slightest capacity to create such an intricate and complicated invention.

Also, why he would populate the picture with so many shallow PWPWP (Pretty White People With Problems) remains a wonder to this scribbler. Despite its numerous flaws, though, I would say if you’re desperate for simple sci-fi and don’t mind large amounts of filter usage and lens flare (especially blues and yellows from cinematographer Blake McClure, “Drunk History” TV series), you might want to give this one a look. Listening wants to be an intelligent, sci-fi film in the vein of “Scanners” or “Altered States,” but it’s far too ridiculous and goofy to take as seriously as it takes itself. The padded plotting, uninspired direction, almost amateur performances, and overall aura of cheapness just say “straight to video.” The film also sports a few sex scenes and some nudity, but never going far enough to even satisfy on that level. 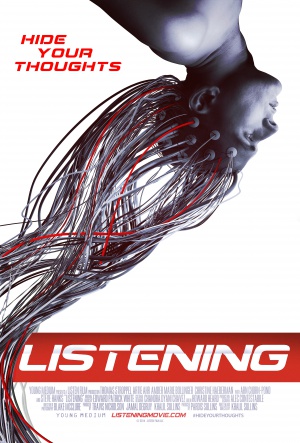