With this concept in hand, Cartel Land takes an inside look at how the war on the Mexican drug cartels is affecting the United States and Mexico, with a focus primarily on the people of two states: Michoacán (Mexico) and Arizona (US). Citizens from each state are fighting the same war, around the same time, with the same strategy: If the government won’t step in to protect us (or in some cases seemingly to work against them), then we’ve got to do it ourselves!

Embedding himself in the trenches with those he is covering, the film is brought to us by director and cinematographer Matthew Heineman (“Escape Fire: The Fight to Rescue American Healthcare” and “Our Time”) with the help of executive producer, Kathryn Bigelow (“The Hurt Locker” and “Zero Dark Thirty”). Yet while Heineman appears unafraid in putting himself in danger for the sake of getting incredible footage (and should be commended for it), the fast editing and sometimes overbearing score undercuts the rawness of certain moments and gives you the feel of a summer blockbuster with dinosaurs chasing Chris Pratt rather than a long-suffering citizen revolution.

Nonetheless, Cartel Land is a very engaging film and, at times, it’s pretty freaking engrossing. It has tense situations with surprising revelations and magnetic characters led by Dr. José Manuel Mireles, who is without a doubt the charismatic star of the AutoDefensas paramilitary self-defense group and the superstar of this film. Throughout, Heineman attempts to examine the man, the myth, the modern-day legend, and his drive to end the unabated terror in his homeland.

Unfortunately, most of the film’s brilliance lies within the sagas of the Mexican people and lacks the spellbinding study of the American narrative that it intended. That narrative has itself another worthy protagonist, American military veteran and leader of Arizona Border Recon, Tim “Nailer” Foley, who also has the drive to end the terror spilling over into his homeland. Yet, the journey the film makes us take with him goes from a promising plot to having the feel of unnecessary commercial breaks.

It’s ironic how Cartel Land can show so much internal depth in its external conflicts, but reveal very little in its central and accessible characters. It’s possible that some of its depth was lost in the editing room, but that’s what makes the difference in telling a strong tale of a complex man in a complex situation versus a tale of multiple intriguing characters in a complex situation told in a mystifying, but uneven fashion. Welcome to the land of what could have been. 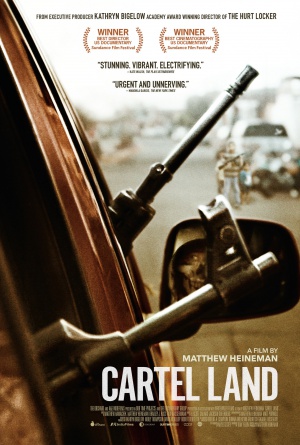