Is it possible to do questionable things for a noble cause? Well, veteran director Catherine Hardwicke (“Twilight”) and first-time full feature screenwriter Gareth Dunnet-Alcocer clumsily answer that thematic question with Miss Bala, an Americanized reshaping of a 2011 Spanish-language tale with the same name. Their vision replays similar story beats as the original, but lacks its understated approach — sizzling with a sleeker aesthetic while (thankfully) having some self-awareness to not go full Michael Bay.

Although the film reveals a structural identity crisis, it’s subdued at times, thanks to its solid-enough cast lead by the genial Gina Rodriguez (“Deepwater Horizon”). She plays Gloria, a make-up artist from Los Angeles who visits her best friend Suzu (Cristina Rodlo, “The Condemned”) in Mexico. Unfortunately, after a horrendous nightclub shooting, Gloria gets kidnapped by a local drug cartel while trying to find Suzu. She’s soon forced to work for them and, with a plot-thickening turn, the DEA. Make no mistake, this is Rodriguez’s movie — Liam Neeson doesn’t show up as her long-lost step-daddy, so we witness the birth of a Latina women’s special set of skills.

While in captivity, Gloria meets the gang’s leader, Lino (Ismael Cruz Cordova, “Mary Queen of Scots”). He’s a feared, but charismatic and good-looking, gangster and, as expected, when he appears the element for romantic tension arises. Hardwicke does her best to subvert this expectation (in the original, her captor was as old as her father), however, due to the limited arc of the characters and the shoe-stringing of Rodriguez and Cordova, the film still firmly settles into an “It’s Complicated” love story, which involves the victim vs. the victor dynamic.

Since that aspect establishes itself when they first meet (and can’t escape it), Hardwicke pushes Gloria’s weighty choices to escape her circumstances for entertainment and substance. This component delivers the film’s better moments of suspense and utter devastation, although Gloria’s innocence and ignorance creates most of those of incidents, which diffuses the foreshadowing that she too could become a villain. It’s an interesting concept that never fully materializes.

In fact, many of Gloria’s motives bring confusion and contradiction. In the state of survival, Gloria labors to find her friend, but as she struggles to do so, the film’s message is clear: Persevere. Likewise, for much of this tale, each scene delivers a truthful tone of realism, until the film explores a more fantastical angle with its action sequences. Unfortunately, this approach undercuts the realistic danger Gloria faces. Ultimately, there’s no reason for Gloria to experience fear since she continues to cheat death in such improbable fashion.

If Hardwicke preferred to stride in pulp film-making, she should have fully embraced it, ditched the semi-neo-realism hallmarks and went full Tarantino. Instead, she walks a tight-rope as if Miss Bala has any chance at awards consideration (which, by the way, it does not). On that note, Rodriguez is a bright star and may some day get her chance at recognition on the big stage (she’s a Golden Globe three time nominee and one-time winner for her efforts in “Jane the Virgin” TV series), but it’s clear she needs something more tailored to her versatility. She manages to show her tough side here, but little else. 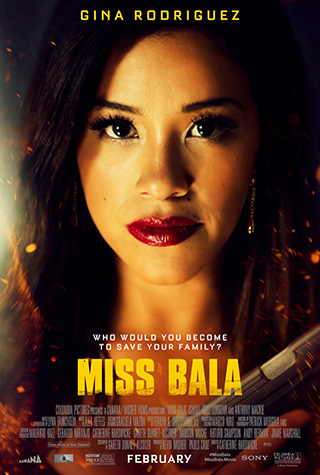