Like last year’s “The 33,” which told of the survival and rescue of a group of Chileans trapped in a gold mine in 2010, Lionsgate’s Deepwater Horizon, produced by and starring Mark Wahlberg (“Ted 2”), along with John Malkovich, Kurt Russell and Kate Hudson, relates the horrifying experience of another true life disaster culled from America’s collective memory just six years ago.

The story is certainly compelling enough for the big screen, unfortunately, it’s the telling of this tale that sometimes falls a bit short, but nowhere near enough to detract from the powerful impact and seething anger those who see it will most likely still feel towards one the world’s largest oil companies and their seemingly callous disregard for man and the environment.

The plot concerns the explosion that occurred on the Deepwater Horizon oil rig on April 20, 2010 (well, it’s not really an oil rig, but an exploration platform that paves the way for other wells to follow).

The fireball that comsumed the British Petroleum (BP) company operated platform resulted in the loss of life for 11 people (their bodies were never found). It is also considered the largest accidental marine oil spill in the history of the petroleum industry, as following the explosion and sinking of the Deepwater Horizon platform, a sea-floor oil gusher flowed for 87 days, until it was capped on July 15, 2010. The US Government estimated the total discharge at 4.9 million barrels (210 million gallons) — an estimated 8 percent to 31 percent larger in volume than the previous largest, the Ixtoc I oil spill in 1979-80.

After several failed efforts to contain the flow, the well was officially declared sealed on Sept. 19, 2010, though reports in early 2012 indicated the well site may still be leaking. That’s a lot to cram into a 99-minute film, so director Peter Berg (“Lone Survivor” and the upcoming “Patriots Day,” also starring Wahlberg) shows us what happens at the very beginning of what would become a perfect storm for disasters: natural, man-made, ecological, economical and public relations-wise.

And to avoid the confusing mish-mash of trying to relate the various fates of more than 30 trapped miners (or, in this case, 126 on the rig), Berg and writers (Matthew Michael Carnahan and Matthew Sand — from a story based on series of New York Times articles) concentrate on a few individuals, led by machinist Mike Williams (Wahlberg, in fact, the movie opens with the real Williams testifying before Congress regarding the incident) and his wife, Felicia (Hudson, “Rock the Kasbah”), supervisor “Mr. Jimmy” Harrell (Russell, “The Hateful Eight”) and pompous Cajun company man Vidrine (multiple Oscar nominee Malkovich, “RED 2”). While Williams is the everyman of the story, the latter two could not be more different, with Jimmy doing his best to check safety procedures and run vital pressure checks and snakeoil salesman Vidrine poo-pooing the test results and then pushing the men to work even faster than they already are.

Since we already know what happened in this quasi-documentary, the telltale signs and foreshadowing of disaster only heighten the anticipation of doom, which, like real life, usually comes in increments (i.e., the rig creaks and shudders, mud and bolts pop from the well’s base and soon mud begins to ooze to the the surface). Soon, however, more tangible and forceful results are produced as the oil blasts through every orifice on the pipeline and machinery. The oil and methane gas then begin to set massive fires and the power goes out. Soon the rig is a massive inferno in which few emerge unscathed.

Meanwhile, individual acts of heroism and sacrifice are taking place, while Vidrine is caught in a web of his own making and two visiting BP execs are made to look like the cowards they no doubt were.

Whether the viewer can make sense of all of these explosions, the carnage and conflagrations is really the key to the ultimate success of Deepwater Horizon. Yes, an incident like this in the middle of the Gulf was no doubt horrific and frightening beyond measure, so Berg produces blackouts, eruptions, confusion and flames galore to highlight the terror as the desperate men (and one woman, Andrea Fleytas played by Gina Rodriguez, “Sleeping with the Fishes”) struggle to escape and survive. And the viewers are right in the middle of it all.

These are horrifying an amazing scenes, filmed by Enrique Chediak (“127 Hours,” “The Maze Runner”), with a special effects team headed by Burt Dalton (“Star Trek Into Darkness”). As this is taking place, Felicia is calling the Coast Guard and other wives to find out more news before tuning into a news broadcast of the event. This is standard operating procedure for movies like this and bring home the point that most people aboard the Deepwater Horizon had family and loved ones scared to death waiting for the latest word, even though, as viewers, we already realized that.

When all was said and done, a few BP executives were charged with manslaughter, but eventually those charges were dropped (of course) and the company never really paid other than a token few million for clean up and compensation. Giant companies like British Petroleum who run roughshod over the land (and the sea, in this case) and sometimes even rape the environment in the name of profits rarely pay for their misdeeds and the suffering they brought to millions.

If anything, hopefully pictures like Deepwater Horizon will not only bring in a few dollars at the box office, but also open the eyes of people to show what some of our greedier corporations are actually capable of. 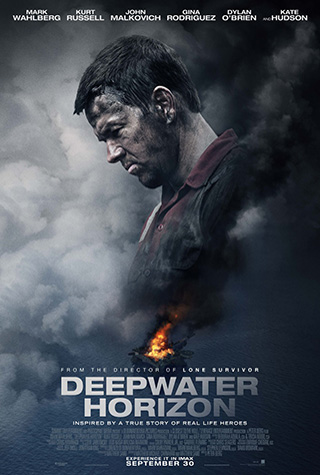