To be quite honest, the trailers for the newest Bill Murray vehicle, Rock the Kasbah, did not leave me with a very positive vibe, but as a professional, I never (well, ALMOST never) let a preview color my perception of the whole output, the proof being in the pudding, so to speak. However, after viewing the picture (directed by Barry Levinson, “Man of the Year,” “Wag the Dog” and an Academy Award winner for “Rain Man”), I have to say my original emotion was right. And that is a shame because I have always been a fan of the actor (even though he once told me to take off my f**cking Cardinals baseball cap during a Bears-Chargers football game once).

Murray’s characters are more often than not, cynical, sardonic, sarcastic and just plain dickweeds until the last-minute when they begin to exhibit some sort of human and humane qualities. These include roles in “Caddyshack,” “Stripes,” “Ghostbusters,” “Scrooged,” “Groundhog Day,” “Kingpin,” “St. Vincent,” and his Oscar-nominated turn in “Lost in Translation,” among others.

Here, however, he just looks terribly bloated and just, well, OLD, but he also seems to be asleep at the wheel, as well. It doesn’t help that Levinson populates the film with several unnecessary supporting characters, including Bruce Willis (“RED 2”) as a gung-ho mercenary, Danny McBride (“This Is the End”) as an idiotic gun-runner and Kate Hudson (“Something Borrowed”) as a high-end prostitute living in a double-wide mobile home in the outskirts of Kabul, Afghanistan. Zooey Deschanel (“Our Idiot Brother”) also appears, but is not onscreen long enough to have much of an impact. Thus, with little assistance from his cast mates, Murray is left to carry the movie by himself, but the weight of the pretentious and clearly unfunny script weigh far too much for him to do it. In Rock the Kasbah he is at his most unlikable since “Kingpin,” but at least that picture was hilarious and Murray’s delightful bastard, Ernie McCrakin, fits right in with the rest of the silliness.

Rock the Kasbah begins well enough, though. Murray is Richie Lanz, a down-on-his-luck music manager/promoter who boasts of working with the likes of Madonna, Stevie Nicks, Ringo Starr and others, but is now reduced to living in a cheap motel in Van Nuys and forced to bilk no talent novices out of their hard-earned money with what’s left of his name and reputation.

Meeting a USO tour organizer in a bar one night, however, he is booked to take his latest client, Ronnie (Deschanel), on a B-grade tour of occupied Afghanistan. Ronnie is the most interesting character here as she is forced to sing cover versions of lower-tier rockers like Meredith Brooks (who once scored a No. 2 hit with “Bitch”) instead of singing her own songs. She does not want to go (it’s a trip from Hell, no doubt, with one of the worst flights since the Wright Brothers) and she soon leaves him high and dry with no money, passport or identification. There is a pretty funny line from this situation, with Richie saying, “I am royally f**cked,” to which the clerk at the seedy hotel cheerfully replies, “Welcome to Afghanistan!”

This turn of events forces him to recruit the aid of “Bombay Brian” (Willis), Merci (Hudson), Nick (McBride) and local cabby, Riza, (Arian Moayed, “Rosewater”). While delivering a cache of weapons and ammunition to a nearby village warlord, Tariq (Fahim Fazli, “American Sniper”), he discovers that the man’s daughter, Salima (Leem Lubany, “Omar”), has a wonderful voice (well, at least as wonderful as a movie like this can give her). She is also a fan of the TV show, “Afghan Star,” (think “American Idol” with just male contestants), but because she is a woman and lives in Afghanistan, she can never, ever, EVER appear on the program. It’s here that Levinson tries to concentrate on the incredible inequalities many females face in Muslim countries and he valiantly attempts to do so, but soon veers into a wildly comic/drama/violent turn that throws everything off-kilter.

By the time Salima gets her shot, we are worn-down, numb and just want to go home (like Murray’s character). The message that woman are not treated very well in some of these locations is clear enough (evidently this was based upon true incidents) and a very noble one indeed, it’s just it deserves more of a telling than given here in Rock the Kasbah. It’s not a terrible waste of time, but enough of a waste for viewers to chuckle once or twice and then forget they even saw it three weeks from now. 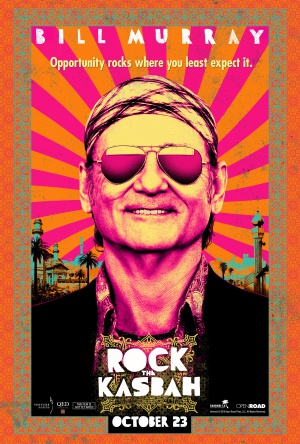