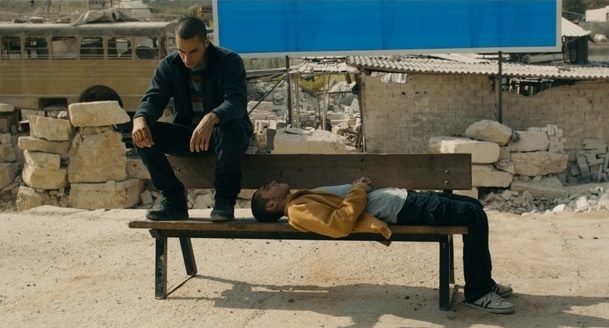 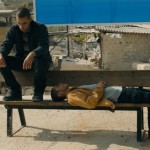 A moment to relax.

Omar (Adam Bakri), a young baker living in the West Bank, has to climb a wall just to see his girlfriend Nadia (Leem Lubany), a high school student. It is not a wall that separates Israeli and Palestinian territory but one within the West Bank itself, dividing Palestinians from each other. Living in what amounts to a war zone, the walls between people are an important feature in Palestinian director Hany Abu-Assad’s powerful Omar, one of five Oscar nominated films in the Best Foreign Film category. Though the film is told from the Palestinian point of view, it should be noted that both the director and the main actors are Israeli citizens who live and work in Israel and the film was made with the support of Israeli authorities.

In spite of a murky plot that becomes more and more complex as events unfold, the film’s exciting chase scenes and complex character interactions maintain a high degree of momentum throughout. Omar, Nadia’s brother Tarek (Eyad Hourani), and Amjad (Samer Bisharat) are good friends who have known each other since childhood and are committed to fighting against the occupation. After Omar is forced to stand on a rock at an Israeli checkpoint until he can no longer endure it, and is then beaten by an Israeli soldier and made to stand on the rock again this time with only one foot, the friends react with a sniper attack that kills an Israeli soldier, an action that is ultimately counter-productive.

Even though he did not pull the trigger, Omar is the one arrested. Stripped naked and brutally beaten in prison, he refuses to name others involved in the ambush, but thoughtlessly tells Rami (Waleed F. Zuaiter), an Israeli intelligence officer posing as a prisoner, that he will never confess, a statement equal to a confession under Israeli law. Under threat of lifelong imprisonment, Omar’s love for Nadia persuades him to accept release under the condition that he bring in Tarek whom the Israeli’s believe was responsible for the terror attack, though there is no evidence that Omar actually follows through.

Nonetheless, suspicions arise in the community about his quick release and the nature of his relationship with Israeli intelligence, resulting in the breakdown of trust between him and Nadia as well as with Tarek and Amjad. Abu-Assad has said that he is not a political filmmaker and that his desire is to “unravel the complexities of human emotion, depicting the occupation as a corrosive force that poisons everyone it touches, Arab or Israeli.” By humanizing the conflict, Omar allows us to see the pressures people in the West Bank have to live with every day in very concrete and personal terms, illuminating a situation in which normal social interactions become almost impossible. 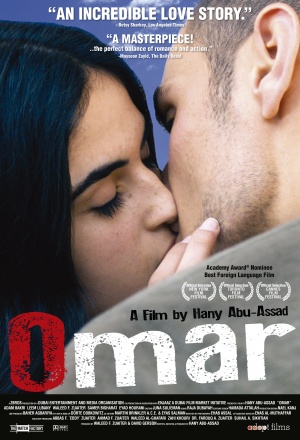