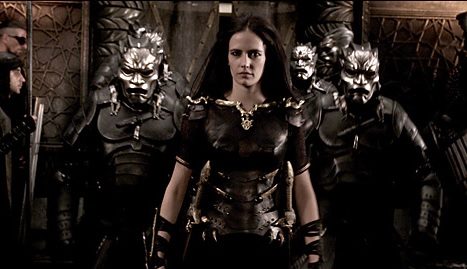 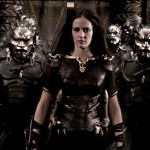 The meanest girl in Persia.

For eight years, fans of “300” have been wondering how the film would be followed up — could the heroic sacrifice of King Leonidas and his brave 300 Spartans be outdone? With his sophomore effort, Noam Murro (“Smart People”) says, “yeah, kinda,” with his fairly praisable sequel 300: Rise of an Empire. Keeping with the mystical gray camera, visceral blood-letting from open neck wounds and uniquely shot sword fights, the movie effectively instills an ashy, fabled sort of feel, but lacks in narrative and character development.

It begins shortly after the death of King Leonidas, as Queen Gorgo (Lena Headey, “The Purge”) tells her men about the ‘god-king’ himself, Xerxes (Rodrigo Santoro, “The Last Stand”) and how he came to be. This tale goes back about ten years earlier, when the Athenian General, Themistokles (Sullivan Stapleton, “Gangster Squad”) killed the great Persian King Darius, father of Xerxes. Mourning his father’s loss, Xerxes, a meek young warrior, is challenged to become ‘divine’ by Artemisia (Eva Green, “Dark Shadows”), a troubled young woman hell-bent on seeing Greece crumble and who also later becomes a Persian Naval Commander. Seeing King Darius’s death as a provocation for war, the Persians gather forces from all corners of their world empire, and set out on Greece (only to find that initial resistance from a certain group of Spartans).

With their fall, it is now Themistokles who must unite Greece and mount a strong defense of his own with a largely outnumbered Athenian army. And even though the news of Leonidas’s death heightens the Greek cause, his task of holding off the coordinated Persian effort is made all the more arduous because he must meet them in the choppy waters of the Aegean Sea — waters the slave armies of Persia cannot claim to know as well as their foes.

With its comic book format and inclusion of a slew of well-fought, neatly filmed battle scenes, 300: Rise of an Empire strikes viewers with similar visuals from the original film, and for the most part, the acting is just as good. Eva Green is phenomenal as the deranged, ruthless Persian Commander, and she is willing to show some serious skin to prove that point. Lena Headey is once again stunning as Queen Gorgo, and delivers in emotional scenes involving the news of her husband’s death. Although Stapleton is given the most screen time as Themistokles, he is nowhere near as effective as Gerard Butler as King Leonidas was, which almost singlehandedly sinks the film like one of the battered Athenian warships. The commemoration factor of the fallen 300 and the reprisals of roles like Daxos (Andrew Pleavin, “Inception”) and Dilios (David Wenham, “Public Enemies”) are fine touches, though.

The film’s faults cannot be solely blamed on Stapleton, who did the best he could (which isn’t saying a heck of a lot) with what he was given. No, it’s the screenplay of Zack Snyder and Kurt Johnstad’s that is mostly to blame. It is glaringly weak when compared to the original, which was filled with gallantry and odds that were so outrageous, viewers were forced to really buckle down in their seats for two hours. It’s also all over the place and the events unfold in a peculiar fashion. While it does make the story not as predictable — or should I say, seem not so inevitable — it would have been nice to see it simply pick up where the first film left off, instead of witnessing what the rest of Greece was doing while Leonidas laid it all on the line. 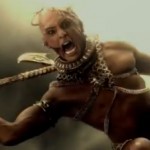 Be that as it may, many of the film’s crew deserve credit for the production values, especially the new cinematographer, Simon Duggan, who helps solidify 300: Rise of an Empire as a visually innovative project as Larry Fong did before him. Once again, there are emphatic camera movements and an artistic appearance that cannot be confused as anything other than Frank Miller inspired.

The bottom line, though, is even with the inclusion of a powerful female antagonist and the passage of nearly ten years, 300: Rise of an Empire still feels like a retread. Audiences will again be treated to inspired battle cries (which aren’t so inspiring this time) by shirtless men and a handful of surreal battles (albeit this time on the high seas) from which torrents of jello-y, artificial blood flow. It’s quite the spectacle indeed, but, with so much time to dream up a sequel, more than ancient Greek history should have been reinvented. 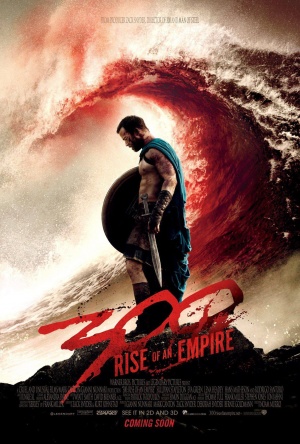