In filmmaker Erik Nelson’s unfiltered new World War II documentary, Apocalypse ’45, viewers are thrust into the final days of merciless war in the Pacific Theater, a small-gain, island-by-island approach against a dogged Japanese enemy that viewed surrender as weakness. As an often overlooked facet of World War II, the Pacific killed or wounded some 426,000 U.S. soldiers in beach invasions, daring naval feats and gravity-defying aerial assaults.

Nelson’s project, which tackles air, land and sea, pushes traditional documentary tropes aside, for the most part, in favor of raw footage and commentary from two dozen war veterans interviewed in 2020, each of whom looks back at their time in service and their distant youths. The footage Nelson airs — found after scouring the National Archives — chronicles the final months of the campaign (1945), as Japanese forces fortify what little territory they have left outside the homeland, and as Americans prepare for a larger assault, one they fear would claim the lives of millions of soldiers.

There is a palpable weariness viewers can sense in the subjects of this archived footage, and so it goes beyond the simple black-and-white imagery we’d associate with textbooks. Here, viewers are dropped into the muddy pits and foxholes on Iwo Jima and Okinawa, where some of the war’s bloodiest fighting took place. They are left to see the dirtied and blood-stained marks of warfare. It’s an indicator, the filmmaker might argue, of war’s futile purpose. This theme appears to be supported across the film’s nearly two-hour runtime, with clear visuals of both Americans on the warpath, as well as Japanese civilians (particularly those marked by gruesome burns from the atom bomb).

Much like Peter Jackson’s “They Shall Not Grow Old,” which colorized and offered sound to World War I’s “Lost Generation,” Apocalypse ’45 functions well, anecdotally. It provides a useful way to visualize some of WWII’s darkest moments, often forgotten due to a global preoccupation with the Third Reich. The film’s edits are clean and helpful in providing a sort of structure to what could have been hours of aimless brutality. Where Apocalypse ’45 lacks is perhaps in pacing and sequence, as the film feels prolonged at times, while doing (relatively minor) time jumps in order to illustrate a point. Still, this does not take away from the richness of the footage.

Nelson, an experienced documentarian who’s conceived films with the likes of Werner Herzog (“Grizzly Man”), has an obvious knack for visual storytelling — evidenced by his 2018 WWII documentary, “The Cold Blue,” which compressed 90 hours of “lost” footage from the 1943 documentary, “The Memphis Belle: A Story of a Flying Fortress.” In Apocalypse ’45, Nelson’s undeniable strength is his ability to draw unique, emotional commentary from the men who served — some of whom have since died since their “final” interview.

Released 75 years after Japan’s surrender, the film finds many of these U.S. servicemen reaffirming, but also lamenting, their roles in the campaign. A few of the men comment on the utter destruction they witnessed — including the firebombing of Tokyo and the use of the atomic bomb to draw the war to an abrupt end in August 1945. The soldiers recognize their place in history, and look back on their service with partial sadness and partial fondness (if only for the patriotic unity they felt at the time). Like Jackson’s WWI documentary, this too does a fine job at highlighting the plight of the average serviceman — who may have moved from island to island (including numerous bloody offensives), dealt with knee-high mud in service boots, and pulled deceased (and often mangled or burned) Japanese soldiers from their “pillboxes.”

Apocalypse ’45 may prove to be one of the final definitive WWII docs with direct commentary from the men who lived it — though their words will echo across the decades. Nelson’s production choice to have these men do voiceover for — and effectively narrate — his war scenes, is a tactic that should earn him praise. Altogether, for those interested in the emotional toll and psychology of war, along with its evolving tactics, this one’s a must-watch. 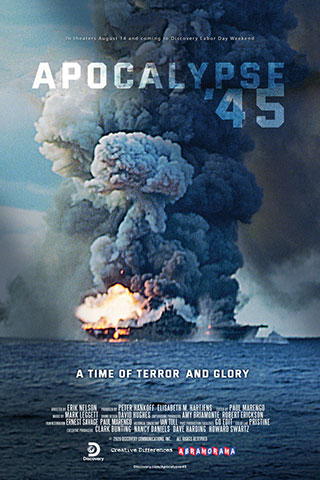