Director Peter Jackson’s body of work is extensive. He brought J.R.R. Tolkien’s Lord of the Rings saga to life in two award-winning trilogies, and his films have garnered dozens of Oscar nominations. Despite these cinematic feats, he perhaps has never helmed a project as significant as his 2018 documentary, They Shall Not Grow Old.

The root of this success, it seems, is Jackson’s uncanny ability to interpret literary and historical canon, thus offering something authentic and palatable to moviegoers. A New Zealander, Jackson has strong ties to the U.K., and thus leapt at the opportunity to create a meaningful World War I film. The result, is a chillingly realistic look at the men of the “Lost Generation,” whose anonymous faces have been left to history, in a war whose frontlines were no doubt a “meat grinder,” sending soldiers as young as 16 to their graves.

Viewed against the footage of hand-crank cameras that’s both choppy and distorted, Jackson’s filmmaking team bumps it up to a higher frame rate, adds color to the muddy trenches and expansive French fields, and essentially humanizes the first generation of soldiers to know machine gun fire and chemical weapons.

Jackson made a definitive choice early on in the production process, preferring not to act as a historian and lecture on the political history of this “Great War.” Instead, he approaches They Shall Not Grow Old as someone interested in the life of the everyday infantryman or gunner, someone who would have had to battle trench-foot or blitz a German line. As many of the phantom voices in the film suggest, the common English soldier — brought off the fields or out of the factory — did not care about the larger political jockeying. They simply aimed to do a job.

They Shall Not Grow Old features a veteran’s take on the cause and scope of the war, with one gentleman mentioning “that fellow” that was shot in the Balkans. (This was the assassination of Austro-Hungarian heir, Archduke Franz Ferdinand, which led to a crisis that would result in war). Another describes the sense of distance from these sparks, with many assuming the conflict would fail to reach England. Nevertheless, British soldiers would soon be mobilized — with some 15-, 16- and 17-year old boys among them. They’d leave the barracks and find themselves amid the harsh realities of a world at war.

Jackson’s work was co-commissioned by 14-18 Now and Imperial War Museums (IWM), in association with the BBC. To bring the project together, the filmmakers reviewed 600 hours of interviews from the BBC and IWM, and 100 hours of original film footage. Opting to steer clear of narration, titles and largely any sense of time or place, Jackson instead forces viewers to comprehend the ways in which an infantryman might see the war: Unaware of the time that’s elapsed or key strategic decisions made by military higher-ups.

It is a unique approach from Jackson, who in a post-show Q&A describes some of his more salient techniques. Jackson walks viewers through the soundtrack, the work of voice actors to dub the silent footage and his efforts to slow down the quick, mechanical movements of the subjects. In its entirety, the film, since duplicated a number of times, has felt the wrath of time and storage, but Jackson’s digital augmentation is arguably the most significant onscreen attempt to document the World War I experience. He experiments with time and technical features to make the soldiers more like their counterparts 20 years later, who have traditionally been portrayed onscreen more.

It is with great care and respect that Jackson tackles this subject. A credits scene commemorates his grandfather, a British veteran of the war. It is through that lens that viewers can now view some of the filmmaker’s creative choices across his oeuvre. Particularly inspired by Tolkien — who famously served in the Lancashire Fusiliers before penning his future hits — Jackson has an incredible ability to conjure up emotion, coupling that with vivid canvases and, in this case, the European war theater.

While the stiff, digitally enhanced movements of the soldiers initially feel jarring, They Shall Not Grow Old eventually becomes a groundbreaking project bound to aid the academic side of World War I studies and introduce an entire generation to the tribulations of trench-going teens.

For world leaders at the time like Kaiser Wilhelm, Tsar Nicholas II, French President Raymond Poincaré, British Prime Minister David Lloyd George and U.S. President Woodrow Wilson, World War I may have been a chess match. For the soldiers it was a blood-soaked Armageddon. For Jackson, it has become a human experience that should not be confined to museum storage. 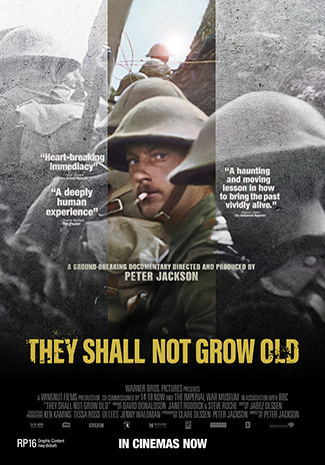