B-movies are a dime a dozen nowadays, thanks to the increasingly strengthening stream of easier distribution paths and the prolificacy of cut-rate digital effects solutions, so it’s tough to sift through the rubble of bargain bin trash to find any gems anymore. The label simply isn’t what it used to be, now sullied by the sheer ubiquity of onscreen junk. Recent effort Dead Ant certainly isn’t going to turn the tide for B-cinema and it’s definitely not a gem in any way, but it at least attempts to trace its origins back to a subgenre’s heyday.

While that may be the very definition of faint praise, it’s also indicative of how Dead Ant works. This is an often insipid, mostly meandering horror/comedy hybrid that’s too dumb to really recommend, but oddly endearing enough in the end to render it somewhat foolishly palatable.

Oozing nostalgia, the movie follows the washed-up members of nearly forgotten metal band Sonic Grave on the final leg of their road trip to play Coachella, where they hope to gain a new legion of fans. The band hearkens back to the 80s, partially because lead singer Merrick (Jake Busey, “The Predator”) looks like a Vince Neil clone and also because bass player Art is played by Sean Astin (“Swing State”).

But when Art downs his peyote portion before everyone else during a group camp out in the desert, he wanders off and, against his drug dealer’s orders, upsets the balance of nature when he flicks an ant off his arm and decides to urinate all over it. Yes, the movie’s plot is specifically set in motion because Sean Astin, the face of “The Goonies” and also the most loyal Hobbit ever, first pisses on and then pisses off a tiny insect.

The angered ant then raises an army of over-sized CGI ants that soon terrorize the band members after they’ve woken up from a drunken, drug-fueled haze the next morning. As if it wasn’t bad enough that they failed to generate the creative inspiration they were hoping for, now they have to fight for their lives if they want to stand any chance at playing their Coachella set.

At this point, the movie is dipping back decades earlier than the 80s, recalling the paranoid joys of 50s big bug movies, a staple of the nuclear apocalypse-fearing B-movies of the time. Dead Ant is essentially referencing iconic B-classic “Them!,” another movie that combined over-sized ants and desert geography. That’s not the only giant ant movie, of course, since the 70s can claim the inferior cheapo “Empire of the Ants,” but the point is that Dead Ant is dabbling gleefully in B-movie history.

Lots of stupid stuff happens amidst bad digital effects and raunchy humor, which sums up the movie quite succinctly. The band’s beleaguered manager (Tom Arnold, “The Curse of Downers Grove”) provides most of the comic relief, much of it lame and all of it extremely Arnold-esque, but there’s still a mild charm to his spastic, sputtering shtick.

As the situation worsens for the besieged characters, it becomes very clear that writer/director Ron Carlson (“Tom Cool”) is taking none of this seriously, which at least makes it easier to appreciate the sheer silliness on display. If you can get behind the feeling that the chewable humans are more likable morons than obnoxious irritants, then a few opportunities for light fun present themselves.

When the band finally arrives at Coachella, the famed music festival appears to be attended by about 20 people, which is either a pitiful sign of the movie’s low budget or an additional wink at an audience that is willing to accept this is all part of the thrifty joke. By now, any viewers that haven’t completely checked out might just be on board for the rock-out finale, which wisely puts the music in the spotlight after previously prioritizing literally everything else.

Dead Ant doesn’t exactly inspire passionate praise, but it reaches the finish line without completely overstaying its welcome, which should count for something when you’re a movie about giant ants upset with peyote-tripping Sean Astin for peeing on their buddy. In the grand scheme of B-movies, this one isn’t quite scraping the bottom of the barrel. It doesn’t rise to the top of the cinematic trash heap, either. For those new to big bug movies, you’d be better off watching “Them!,” but for anyone that needs an additional Tom Arnold fix and a reminder that hallucinogenic drugs might really ruin your day, there’s always this. 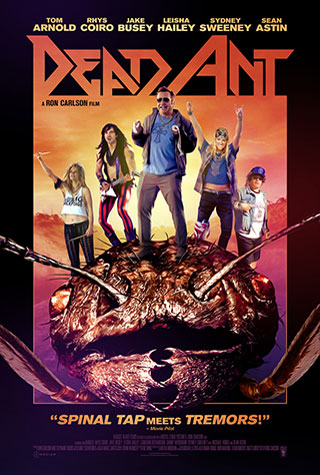