As the title, The Curse of Downers Grove, suggests, there’s a curse on the small town of Downers Grove — each year, a senior dies in the days leading up to graduation. I incorrectly assumed the curse would be supernatural, and as soon-to-graduate high school senior Chrissie (Bella Heathcote, “Dark Shadows”) tells her friends, it’s far more likely that the curse is a coincidental result of too many young adults making bad decisions that, tragically, end their lives. In last year’s tragedy, a young man climbed the town’s water tower while under the influence of drugs, slipped, and fell to his death. This year, as with most years, the curse is all anyone can talk about, and as the days creep closer and closer to graduation, the townspeople (especially the graduating seniors) spend their time speculating about who the “curse” will strike next.

Chrissie, however, has no interest in the curse. While her friends peruse the yearbook and make predictions, she tries to change the subject, frustrated with the town’s morbid obsession with the deaths of students. She would rather think about starting her life after high school and about her budding romance with a local mechanic, for which her friend Tracy (Penelope Mitchell, “Zipper”) is incessantly pressing her for details. One afternoon, while at a diner, the girls encounter a group of boys from another school who invite them to a party. At Tracy’s urging, they attend, but Chrissie finds herself in a dangerous situation when Chuck (Kevin Zegers, “The Mortal Instruments: City of Bones”) tries to force himself on her in the upstairs bathroom. Chrissie defends herself and escapes, and Chuck is left blinded in one eye resolving himself to revenge. He persists in stalking Chrissie — showing up at her school, attacking her younger brother, and even appearing at the window of Chrissie’s boyfriend’s car while they parked out on the bluff. Despite repeated attempts to get Chuck to stop, Chrissie finds herself in a precarious position as Chuck and his friends come closer to exacting his revenge on her. All the while, she slowly begins to consider the possibility that maybe she the senior doomed to be the latest victim of the Downers Grove curse.

Based on the novel by Michael Hornburg, and adapted to screen by Bret Easton Ellis (the bestselling author of cynical 80s-culture novels Less Than Zero and American Psycho) and director Derick Martini, The Curse of Downers Grove is a thriller that establishes a weak premise through convenient plot events and quick exposition. You’re expected the accept the town’s mythology without much explanation, and characters are haphazardly thrown into scenes in order to create situations that move very quickly, struggling to fit together with any real cohesion. For example, Chrissie’s mother (Helen Slater, perhaps best known for her portrayal of the titular character of “Supergirl”) is introduced, quickly given a new boyfriend, and whisked off to Las Vegas for a whirlwind romance — one week before her daughter’s graduation from high school. In fact, the film gives us a periodic countdown until graduation, beginning at five days until the ceremony. I don’t quite buy that Chrissie’s mother would take a vacation so close to such a momentous occasion, but since danger needs to be established in order to further the film’s plot, off she goes.

The rest of the characters, like mom, are given no depth, which isn’t always necessary in a thriller, but there should at least be some tension to support the story. There’s none of that, and the acting quality is pretty lukewarm. No one is outright terrible, but there are too many placeholder characters, like Chuck’s bro-dude football buddies, Chrissie’s childhood friend Ian (Mark Young, “Tammy”), and, to be honest, Tracy. She’s more of a means of keeping Chrissie’s younger brother, Dave (Martin Spanjers, “The Comebacks”), in the mix than to be of any real help to her best friend.

This is evident as the climax of the film — which the plot moves steadily, albeit clumsily, towards — comes during a party Tracy and Dave throw in Dave’s and Chrissie’s house (completely unbeknownst to Chrissie, who’s apparently — and conveniently — anti-social media). And following the party, the resolution to the film is laughably bad. Despite being a fan of Bret Easton Ellis’ work, I was blown away by how terrible his and the director’s ending to this film really is. Instead of gasping in shock — an effect I expect the director was hoping to instill in me — I really did laugh out loud. Fittingly, the ending puts some slapped-together icing on the cake of a film that’s hastily shoved along to a conclusion.

At the beginning of The Curse of Downers Grove, Chrissie tells her friends, “Life is [just] a series of choices.” Heed her philosophy and don’t make the bad choice of choosing this film for your movie night. I wish I had the foresight to have listened.

'Movie Review: The Curse of Downers Grove (2015)' has no comments 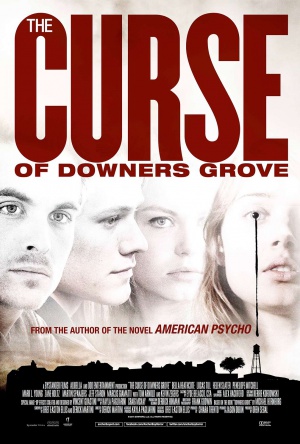