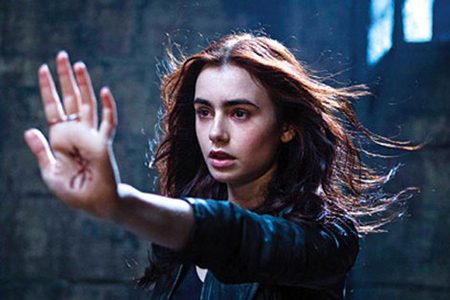 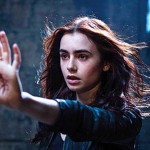 While watching The Mortal Instruments: City of Bones, I tried to keep track in my head the number of other — better — movies this one “borrows” from. It wasn’t easy to try and follow the ridiculous plotline AND count, but a few of the obvious ones were: “Alien,” “Carrie,” “Buffy the Vampire Slayer,” “Brave,” “The Thing,” “Oz: The Great and Powerful,” “Stargate,” any “Harry Potter” picture and, of course, the “Twilight” series. So, fans of that last franchise should be in ecstasy. Those who despise that series, feel free to take ecstasy . . .

But no matter what side one is on, though, compared to lead actress Lily Collins (“Mirror, Mirror“), Kristen Stewart is like Katherine Hepburn.

Directed by Harald Zwart (“The Karate Kid” remake), and adapted from the Cassandra Clare fantasy book series (which should start a nationwide effort to promote teen illiteracy), The Mortal Instruments: City of Bones is literally a Frankenstein’s mish-mosh of monster/fantasy/action/adventure that purports to tell us that modern New York is full of werewolves, vampires, demons, witches, warlocks and other mutant hellbeasts that is protected by a garrison of beautiful teenage half-human, half-angels. With all of this going on, one would think this film is spine-tinglingly exciting — one could not be more wrong, however.

Collins plays Clary Flay, a typical Hollywood-esque beautiful teen, but one who draws little swastika-like designs, and has visions and sees people no one else can. After witnessing a murder in a local nightclub, she begins an encounter with bleach-blonde leather-clad Jace (Jamie Campbell Bower, “Twilight Saga: Breaking Dawn” both parts), who saves her life, as well as the life of her non-believing James Franco-like boyfriend, Simon (Robert Sheehan, “Killing Bono“). Later, after her mother, (Lena Headey, “The Purge,” who spends most of this film in a coma, much like the audience), disappears they travel to “The Institute,” a massive castle in the middle of NYC (that no one can see, by the way, there’s a lot of that going on), where they meet fellow Shadowhunters (angelic beings who spend most of their time just hanging out, not doing anything at all) — Hodge (Jared Harris, “Lincoln“), Alec (Kevin Zegers, “The Colony“) and Isabelle (Jemima West, a slew of bit parts in French TV shows) — and where Clary can get on with embracing her destiny. 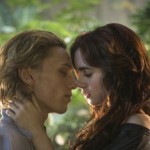 There is also an evil Shadowhunter, Valentine (Jonathan Rhys Meyers, “Albert Nobbs“), a surrogate wolfman dad, Luke (Aidan Turner, “The Hobbit: An Unexpected Journey“) and a voodoo tarot card-reading witch, Dorothea (CCH Pounder, “Avatar“) mixed into the confusion. Cementing them all together is some below juvenile dialogue from screenwriter Jessica Postigo, which even includes two actual full-length singles to illustrate several near lovemaking sessions in an effort to bring stargazing 14-year old girls into the cinemaplex.

Incoherent, nonsensical, far too long and just plain dull, The Mortal Instruments: City of Bones is a complete and total waste of time, although not a waste of talent (simply because everyone involved deserves to be in this movie). Better to check out any of the above-mentioned pictures or spend 100 minutes vacuuming the house than waste a moment on this chaotic monumental disaster that — hopefully — will end the franchise immediately. (Of course that is too much hope to ask for as a sequel, “The Mortal Instruments: City of Ashes,” is already in the works.)

'Movie Review: The Mortal Instruments: City of Bones (2013)' have 8 comments 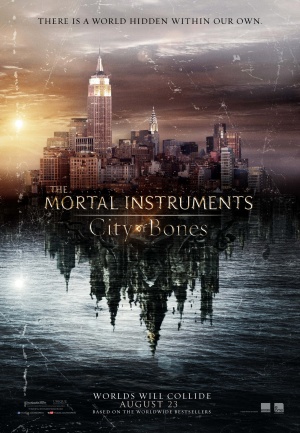 The Mortal Instruments: City of Bones (2013)