Florence Foster Jenkins singing voice was flat and off-key, yet her generosity to others, friendship with music greats such as Arturo Toscanini, and love of music brought happiness to many during the dark days of World War II. Labeled by some intemperate critics as “the worst singer in the world,” she is given something of a tribute in Stephen Frears’ (“Philomena”) film bearing her name. Produced by Tracey Seaward (“War Horse”) and Michael Kuhn (“Being John Malkovich”) and written by Nicholas Martin, Florence Foster Jenkins stars Meryl Streep (“Suffragette”) as the singer whose vocal talent reached everything except the notes. Not surprisingly, Streep is marvelous as the charming socialite as is her husband St Clair Bayfield played by Hugh Grant (“The Man from U.N.C.L.E.”) in what may be a career-redeeming performance.

Though Jenkins was not a world-class opera singer by any stretch of the imagination, she had a devoted following who flocked to her concerts and helped her records become collector’s items. Having contracted syphilis from her first husband at the age of 18, Jenkins spent a lifetime battling the disease and lived to the age of 76, kept alive by her devotion to opera and the love of her second husband. Bayfield arranged her performances, bribed critics to give her good reviews, and made sure her performances were only attended by her fans. Though the film makes clear his love for Florence, it also shows him living with his mistress Kathleen (Rebecca Ferguson, “Mission: Impossible – Rogue Nation”) in a separate apartment.

We first see Florence in a series of performances at the Verdi Club which she founded where her outlandish costumes and over-the-top theatrical performances provide much entertainment to her followers. With Bayfield’s help, she takes singing lessons from Carlo Edwards (David Haig, “Two Weeks Notice”) and enlists a young pianist Cosmé McMoon (Simon Helberg, “The Big Bang Theory” TV series) to provide her accompaniment. Helberg is terrific as the flabbergasted pianist whose expression when he first hears Jenkins sing is priceless. Despite his reservations about what his attachment to Jenkins will do to his career, he sticks with her despite his reservations and continually grows fonder of her.

Jenkins’ dream was to sing at Carnegie Hall and she accomplishes this late in her life, performing to a group of soldiers given free tickets as a tribute to their service. The film in lesser hands could have become a mockery but Frears balanced presentation, though still an odd mixture of comedy and tragedy, is always respectful, showing the singer’s desire to spread joy in spite of her limitations. Though the film leaves open the question of whether or not Jenkins was aware of her lack of ability or was simply delusional perhaps due to her illness, it is mostly irrelevant. Florence Foster Jenkins is funny, entertaining, and sincere, providing moments of tenderness and an atmosphere of purity and innocence that leaves cynicism at the front door. 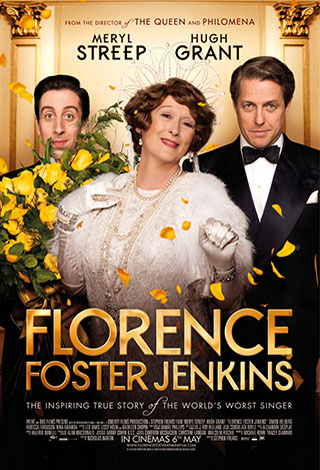