Passengers, the newest Sony Pictures (Village Roadshow) release, directed by Morten Tyldum (“The Imitation Game”), is a visually stunning outer space adventure with a very good cast (Jennifer Lawrence, Chris Pratt, Michael Sheen, Andy Garcia and Laurence Fishburne) that fails to lift off due to an earth-bound, cliché-ridden script. That last item can be blamed on Jon Spaihts (whose credits include the good, “Doctor Strange,” the bad, “Prometheus,” and the ugly, THIS feature).

Passengers falls in that crowded “Could Have, Should Have Been Better Than It Was” Department. It looks amazing, but then again, so does a wedding cake, but there are lot of empty calories there with little or no nutrition within.

The plot takes place in the distant future, when man has taken to colonizing other worlds and has developed spacecraft velocity near light speed. Aboard the Avalon on the way to Homestead II, an earth-like planet, colonist/mechanic Jim Preston (Pratt, “Jurassic World”) is awakened from his 120-year hyper-sleep when a small asteroid collides with the vessel. Stunned, he first believes it just the normal part of the trip’s conclusion, but a computer display informs him that there are still 90 years remaining in the journey.

He then meets what he thinks is another passenger, but it is Arthur, the robotic bartender (Sheen, “Far from the Madding Crowd”), with whom he shares his secret fear, frustration and loneliness, since he was the only passenger of the 5,000 or so aboard to have woken. Jim then discovers the hyperchamber of Aurora (Lawrence, “X-Men: Apocalypse”) and begins reading her complete history in the ship’s computer files (sort of stalking her, 21st century style). After a year’s solitary existence, he blabs to Arthur that he plans to sabotage her hyper-bay and bring her out of suspended animation. And although he knows this is wrong, the script insists upon it.

Once accomplished, this meet-in space-cute situation causes the two, of course, to fall in love (what’s new?). That is until the beans are spilled as to what REALLY happened. Before she can huff and puff too much, though, another human appears — in the form of Deck Chief Gus Mancuso (Fishburne, “Batman v Superman: Dawn of Justice”) — who hangs around just long enough to tell them the luxury spaceliner has some serious issues.

When little problems like door jams, cafeteria snafus, elevator malfunctions and broken Roomba cleanup bots turn into major disasters (gravity control is lost, the power goes out and a fusion reactor reacts the wrong way), it’s the apparent end of the trip, the ship and our lovely leads. Since, however, Jim is a mechanic an Aurora is a, well, a writer, they get busy and try to discover just what’s wrong (the diagnostics are unavailable, so they have to figure it out by themselves). They find that the nuclear reactor is on the fritz, so like a typical mechanic and writer, they get to work in an attempt to solve the dilemma.

As previously written, Passengers is an amazing well-crafted visual experience. With the stellar Rodrigo Prieto (“Argo,” “Brokeback Mountain” and “Babel”) behind the camera, Guy Hendrix Dyas (“Inception”) in charge of production design, and art direction by John Collins (the first two “Hunger Games” films), the ship’s interior captures what such a vessel might actually look like, with 5-star restaurants, grand concourses, sophisticated voice-activated computer systems, modern pool and sports facilities and an unbelievable observation deck, among other amenities.

Meanwhile, the exterior photography is just as vast and beautiful (the science isn’t always perfect, though, as the Avalon gets dangerously close to a red giant star during the voyage, but no one seems to break a sweat over it).

Ironically, it’s when Lawrence is freed from her sleep pod that the film loses momentum. When Jim was alone, Passengers was fun as he ran around the vast craft, exploring, using various tools to try and wake the crew, banging on things, making a “collect” call to earth (that costs $6,000 and will take almost 50 years to hear back) and spilling his guts to Arthur, who finally tells him to enjoy what he’s got. Jim takes that advice, confiscates a luxury suite (he, it seems, is only a third class traveler), enjoys first class food and drink and even grows a beard that would make the cast of “Duck Dynasty” chartreuse with envy. The fun ends when Aurora arrives and we’re soon forced to endure several Hollywood-type sex scenes, including trying to make clumsy love in pressurized space suits. Thank goodness these scenes are short-lived. And while the leads squander their dramatic chances, Sheen commits grand larceny every time he is onscreen and makes the dull journey just a bit brighter . . . just a bit.

A cross between “Gravity,” “2001: A Space Odyssey,” “The Martian” and “Moon,” with a touch of “The Shining” for good measure, Passengers would have made a very interesting project if Jim were left to work things out on his own. But, then again, that probably would not have brought in as many viewers. And everyone knows, even in space you can still see the bottom line. 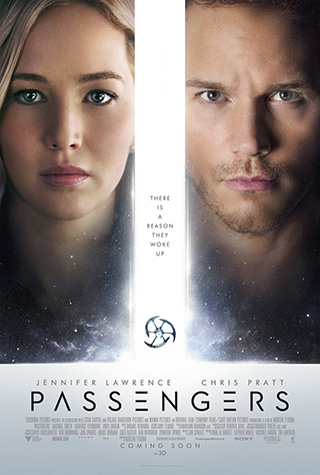