Set in fictional Wessex County in south-west England in the 1870s, Thomas Vinterberg’s (“The Hunt”) adaptation of Thomas Hardy’s novel Far from the Madding Crowd chronicles the ups and downs of Bathsheba Everdene (Carey Mulligan, “Inside Llewyn Davis”), a smart, headstrong woman who is fiercely proud of her independence when it comes to choosing suitors. Far from being a stodgy period piece, this fourth film adaptation of the Hardy classic is one of the most enchanting films of the year, alive with the spirit of a woman of uncommon strength and the beauty of the English countryside captured by the stunning cinematography of Charlotte Bruus Christensen (“The Hunt”). Though marred by an often overly-insistent musical score, it is well-balanced by some authentic English folk songs and dances.

The film, which could have been called “The Story of Three Loves,” works as well as it does because of the very real chemistry that exists between Bathsheba and her suitors. They are Gabriel Oak (Matthias Schoenaerts, “Rust and Bone”) a sheep farmer, William Boldwood (Michael Sheen, “TRON: Legacy”), a prosperous middle-aged landowner, and Francis Troy (Tom Sturridge, “Effie Gray”), a handsome swashbuckling Sergeant. While staying with her aunt, the beautiful Bathsheba first meets Gabriel, the owner of a nearby sheep farm, and she has him at hello. As performed by Schoenaerts, Gabriel is soft-spoken and unassuming but a man of quiet strength and dignity. Without any game-playing or what might be the nineteenth century equivalent of a dinner date, he wastes no time in asking her to marry him.

Bathsheba tells Farmer Oak, however, that she has no interest in being someone’s wife, saying “I don’t want a husband. I’d hate to be somebody’s property.” As so often happens in life and at the movies, however, the unexpected occurs and their fortunes are suddenly reversed. Gabriel loses his farm when his sheep are accidentally destroyed while Bathsheba, after receiving an inheritance from her uncle, becomes the mistress of the large Weatherbury farm at a comparably young age. Not cowed by the challenges, she tells her employees on payday, “I shall astonish you all.” When Bathsheba learns about Gabriel’s misfortune, she hires him as a simple shepherd and an unspoken bond between them begins to grow.

Her life starts to get more complicated, however, when she impulsively sends a Valentine’s card to her neighbor William Boldwood as a prank. The prosperous but lonely bachelor misinterprets her card as meaning something more than intended. Boldwood, however, is emboldened enough to propose marriage. He may not be seeking romantic love as we envision it, however, but promises Bathsheba that he will protect and care for her the rest of her life, seeming to need in Carl Sandburg’s poem, “a voice to speak to me in the day end, a hand to touch me in the dark room, breaking the long loneliness.”

Saddened by Bathsheba’s rejection, he is still determined to continue his pursuit and is content for now to wait in the wings. When Gabriel tells his boss what he thinks of her treatment of Boldwood, she immediately fires him, but swallows her pride and hires him back when her sheep become ill and she needs an expert to restore their health. Tired of her role at the farm, Bathsheba falls for the overtures of Frank Troy, a handsome young sergeant whose gallant nature and bright red uniform becomes part of the seduction process. Unfortunately, Sturridge’s performance is not strong enough to allow us to easily buy into the idea that she could be swept off her feet that suddenly, given her recent history.

Unaware that her Troy is still in love with Fanny Robbin (Juno Temple, “Maleficent”), a young woman who stood him up at the altar on their wedding day, they are soon married and Bathsheba has to learn a very costly lesson about the limitations of outward appearances. While it is difficult to condense a long Victorian novel into a modern two-hour film with wide audience appeal, Vinterberg pulls it off brilliantly with the aid of a fine screenplay by David Nicholls (“One Day”) and a great performance by Carey Mulligan. On the surface, Bathsheba is mercurial and vain but Mulligan captures a deeper emotional level of her personality that balances her vanity with a sweet innocence. “It is difficult”, she says, “for a woman to define her feelings in language which is chiefly made by men to express theirs.” Perhaps the greatest achievement of Far from the Madding Crowd is allowing us to see who Bathsheba is through her own eyes, not through those who define her. 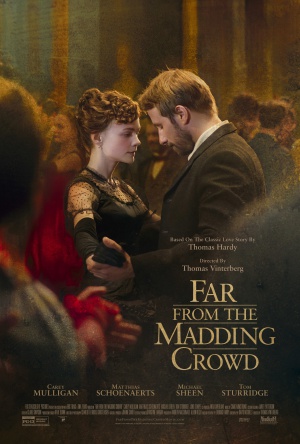