The unimaginable horror of school shootings has been the subject of several searing cinematic works to date, so anytime a filmmaker steps into the terrifying fray, it seems imperative that they’re aware of what others have done before them. Tim McCann’s White Rabbit appears to begin rather naively in that respect. As the young director starts to dig into the mind of troubled teen Harlon (Nick Krause), his movie feels immediately engulfed by the shadow of great pictures on this topic, namely Gus Van Sant’s “Elephant,” Denis Villeneuve’s “Polytechnique,” and Lynne Ramsay’s “We Need to Talk about Kevin.” But as McCann delves deeper into his story, he finds his voice and turns what first appears to be a contrived examination into a tragically upsetting character study.

Among other surprises is the lead performance by Krause, who previously embarrassed himself as the gratingly annoying buddy of Shailene Woodley’s character in Alexander Payne’s “The Descendants.” Perhaps getting punched in the face by Robert Forster awoke something in him. Or perhaps McCann and screenwriter Anthony Di Pietro just gave the actor a much better role.

Either way, Krause has a tall order here, playing a high schooler in a small town where all he has is his teary-eyed buddy Steve (Ryan Lee, “Super 8”), a nasty bully (Zac Waggener) always looking to ruin his day, and painful memories of a lonely childhood. Krause is on screen for almost the entire movie and convincingly navigates the minefield of Harlon’s existence. The childhood scenes are out of his hands, though, and they get his character’s arc off to a shaky start. McCann’s decision to introduce Harlon’s father Darrell (Sam Trammell, “The Fault in Our Stars”) as a classic white trash jerk looks to cripple the picture quickly.

It’s such a cliché to blame everything on a nasty father and Trammell’s performance hardly suggests the character is anything more than a pastiche of tired stereotypes. He’s a yelling, impatient, boorish creation who drags his sons out for a redneck hunting excursion where they can shoot rabbits, including the titular white one that later haunts Harlon with its image of blood-soaked innocence. Darrell seems fine with his other son, but constantly picks at Harlon’s emotional scabs, insulting him at every turn.

When we later find out that Darrell is the kind of dad who smokes crack and takes his son to a strip club only to glare at him while they’re having joint lap dances, well, it doesn’t come as much of a shock. McCann goes pretty overboard with his depiction of the fractured father/son relationship and if that’s all White Rabbit had to offer, it would never be able to muster up the dramatic power it later reveals.

The depiction of the youth interactions is certainly more interesting and engaging. Harlon and Steve are a great pair, two outsiders looking to survive their dreary surroundings. Waggener’s bully is a typical take on the adolescent antagonist, but his small doses leave an impression. And then there’s Britt Robertson (“The Longest Ride”), who blazes onto the screen just when the movie most needs a breath of fresh air. Her free spirited Julie finds a kindred spirit in Harlon and her loose attitude and flirty nature prove exactly what the guy needs at that point in his life. Theirs is a sweet relationship that seems to give Harlon just the right amount of companionship to get him through the day.

Robertson is fantastic in the fun, vibrant role and White Rabbit benefits greatly from her presence. Still, up until this point, the movie is treading in familiar territory, going through the usual motions of what comprises an angsty teen experience. It’s all done quite professionally for such a small movie and McCann owes a lot to cinematographer Alan McIntyre Smith, who shoots the whole pic with a muted color palette and a gritty crispness that gives the images a timeless look in their Anywhere, America settings.

But after having seemingly settled into a groove, McCann shakes off the familiar and inserts some smart, effective twists into the narrative. There’s nothing ridiculous or genre-swapping here, only unexpected turns taken with character arcs that further complicate Harlon’s journey. It’s here that McCann finds something more in his story than previously suggested and the way he brings Harlon’s arc to a close reaches a peak of tragedy that far exceeds the movie’s initial clichéd grasp.

White Rabbit never quite touches the greatness of the aforementioned movies to have previously tackled this topic, but ultimately, that’s less a knock on McCann’s work and more a reminder of how creative and original those other movies are. McCann still pulls off something very special here, which seemed impossible back during the first act of his flick. Where he steers the picture is very impressive.

In the movie’s final moments, McCann dabbles in haunting ambiguity, going past one open-ended cut to black only to find another. It’s a strong ending, partially because of where it leaves Harlon and us in the divide, but mainly because it goes against the grain of everything the movie seemed to suggest at the start. The answers that once seemed cliché are now vague and complex.

McCann suddenly opens a well of emotion that the movie must have always been storing, but never tapped into. It’s a powerful punch of a finish that speaks to the challenges of understanding and dealing with mental illness and the way one’s sensitive psyche is forever molded by the immutable impact of time. For Harlon, the past is simply inescapable and while McCann occasionally paints that past with a strained brush, his final strokes form a movingly melancholic portrait of inner demons not easily exorcised. 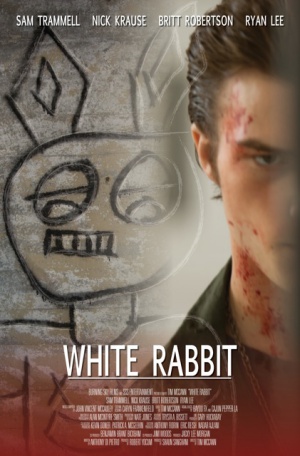