Nicholas Sparks, who has probably put more words to paper than William Shakespeare (although none as memorable) has graced us with his yearly obligatory salute to misogyny, perfect abs and beautiful white people with problems we WISH we could have in his latest tearjerker, The Longest Ride.

Sparks, the creator of such books/films as “The Notebook,” “Dear John,” “A Walk to Remember,” “Safe Haven” and “The Lucky One,” among others, has made millions tricking people into thinking these are truly romantic efforts when in reality, they follow the same by-the-numbers formula (guy or girl comes to new town running from a dreadful secret, meets desirable girl or guy, love and lust soon follow). Plus, there was never a more accurate description of a motion picture since “Dumb and Dumber, Too.”

Here, director George Tillman Jr. (who helmed “Men Of Honor” in 2000, but nothing much since) tries to tell two different stories in North Carolina during two different eras simultaneously (just think of “The Lake House” without the laughs, charm and bus accidents). The tale of Luke (Scott Eastwood, yep, he’s Clint’s son) and Sophie (Britt Robertson, “Delivery Man”) takes place in the present, while the saga of Ira (Jack Huston, “American Hustle”) and Ruth (Oona Chaplin, “Game of Thrones” TV series) is set during World War II. They come together one night after a car driven by old Ira (the still-alive Alan Alda, “Wanderlust”) skids off the road, forcing Luke to pull him to safety. A package of letters are found in the car and Sophie begins reading them to him which sets the whole flashback/second plotline into action.

Meanwhile, Luke is a bullrider (“That’s all I know how to do!,” he shouts. Really?) who is just a concussion away from permanent brain damage and art lover Sophie is one cliché character away from breaking Sparks’ record of “writing” women who appear strong and confident on the outside, yet exhibit no lives of their own outside the hunky studs they are attracted to in these movies (remember how many times the term, “stupid woman” is used in “The Notebook?”).

Of course they meet cute — he drops his hat while on a bull and tells her to “Keep it,” for whatever that’s worth. In real life, she would have said, “No thanks.” In reel life, however, it leads to a most incredible budding romance.

Yes, Luke doesn’t need much help here, possessing his father’s good looks and crooked smile, his “aw shucks” demeanor and chiseled body (I mean, we cannot forget his chiseled body as the cameras linger on it constantly like a creepy stand-in for Jeffrey Dahmer). His acting pedigree lacks some, but his old man really didn’t hit his stride until he was 60, so I’m willing to give Scott a little more time. Robertson, on the other hand, is the perfect example of when pretty meets annoying and, usually after time, the latter always wins out. She wants Luke to give up the rodeo circuit, but it’s all he knows (as was alluded to earlier in this review). It’s a story that pales in comparison to the secondary plot of Ira and Ruth and fleeing their European homeland and war and a world in turmoil, the inability to have children and other problems, but, strangely enough, no mention of the Antisemitism that drove them to the United States in the first place. In the meantime, Academy Award-nominated Alda is left to play a second-rate Walter Matthau in “I.Q.,” trying to show the dull Scott and Sophie what love is REALLY all about.

If your are a fan of Sparks, a lonely single woman or possibly a 14-year-old girl, you may find The Longest Ride appealing, others, though, will most likely see it as contrived and manipulative, like most of Sparks’ work. My question is, why not just make a film about Ira and Ruth and leave the other couple completely out of the picture?

I found myself thinking this more than once during this exercise. 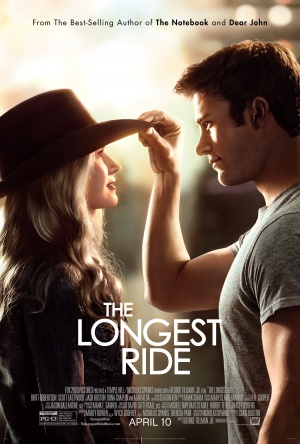