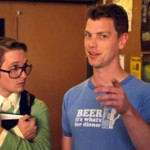 A match made in heaven.

DisOrientation — ya gotta love the odd capitalization — is aimed at college kids and those of us who never grew up. Its core audience will like it, probably quite a bit. It’s certainly better than most big-budget raunch films out there today, even with its unlikely plot (or probably because of it). There’s a lot of barfing, there is drug use, precious little nudity, and plenty of laughs.

Finn (Eric Toms) is a longtime college student who rarely goes to class. He’s also run through several roommates over the years, ostensibly because his wild antics drive them away. The resident assistant despises him. So do his professors. He spends most days at the only bar in town that opens before noon. He’s the ne’er-do-wells to end all ne’er-do-wells.

His new roomie is Toby (Todd Gaebe), a teen prodigy who would make Wormser from “Revenge of the Nerds” look like Ruby Rhod from “The Fifth Element.” Toby is terrified of everything, especially his dad (Richard Moll), who doesn’t understand his brainy offspring much at all. Finn doesn’t help matters by essentially making Toby sleep under the bed while he (Finn) brings home college girl after college girl. It’s a scarring experience.

Since DisOrientation is a comedy, we can rest assured that all will turn out well in the end, and it doesn’t matter that we know that. We expect there to be some sort of reconciliation between the two (one makes the other less wild, one makes the other less timid). We expect a growing of character, if not outright development. And we expect some climactic scene in which bad guys, probably jocks, are outplayed in some fashion. We are not disappointed.

Toms is the one who holds it all together. The effortless charm is at just the right level. Too much of it, and a character seems smarmy, self-promoting, and unappealing. Not enough of it and the character can just disappear into the scenery, not something you want your lead to do. Toms manages to make Finn be both likeable and unlikeable. He accomplishes this by being funny, getting the most out of writer Charles Price’s script.

The movie is low budget, surprising because of the multitude of songs on the soundtrack. And yet each song is well chosen and adds to a scene’s atmosphere, rather than distracting from it. Sure, occasionally one is used for a montage — a staple of this film type — but that’s the exception. Regardless, the movie doesn’t feel like a low-budget movie at all. It has the look and feel of a studio film, if that studio had any idea about how to make a funny college-kids movie.

DisOrientation doesn’t waste time with a complicated plot and wisely lets Toms (and Gaebe) carry the load. The movie is endearing (all college-kids movies must have some heart), but it’s also terrifically disgusting and hilarious. The drinking contest alone is a minor comedy gem.

'Movie Review: DisOrientation (2012)' has no comments 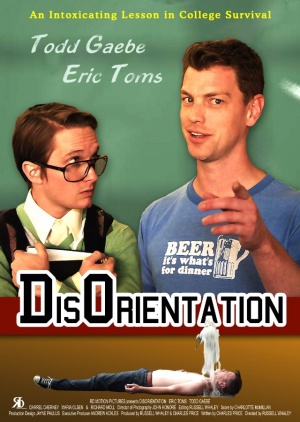