Critically acclaimed filmmaker Steve McQueen (“12 Years a Slave”) makes his triumphant return in the form of the modern crime thriller Widows, a film that is as familiar to McQueen’s drama heavy filmography as it is opposing to the historically driven stories he’s become internationally recognized for.

Carried by one of the more commanding female leads working today in Viola Davis (“Fences”), the film immediately captures a resonating theme of loss and individual persistence. The drama from its earliest point commits to being an urban crime thriller, set within a politically challenged and crime filled environment of Chicago, by following the events of a group of experienced thieves led by Harry Rawlings (Liam Neeson, “The Commuter”) whose most daring attempt at relieving someone of their dirty money ultimately becomes their last as they are caught in the crossfire of bullets fired from the guns of a swarm of police.

Veronica Rawlings (Davis), wife of the leader of this brave group of criminals, finds herself in a compromising position when crime boss and local politician Jamal Manning (Brian Tyree Henry, “Hotel Artemis”) informs her that her husbands deadly misdeed was at the expense of his own dirty money to the tune of $2 million dollars. Manning informs Rawlings that this debt has now fallen onto her, as he politely and uncharacteristically gifts Rawlings a month to return the amount to him before there will be deadly consequences.

While the film follows the group of widows attempting to cover this debt from this point forward which is comprised by Linda (Michelle Rodriguez, “The Fate of the Furious”), Alice (Elizabeth Debicki, “The Cloverfield Paradox”) and later Belle (Cynthia Erivo, “Bad Times at the El Royale”), McQueen and co-writer Gillian Flynn, seem downright obsessed with the corrupt political angle of the story. This politically charged portion of the film takes away from its thriller roots and comes off as half-hearted and even forced at times as we view a battle between Manning and career politician Jack Mulligan (Colin Farrell, “The Killing of a Sacred Deer”), as they both set their sights on political office within the city.

Some may argue this pivot gives Widows a complimentary backdrop of cultural implications; one could also argue that it is at best a side-note to a film which nearly begs for more character depth and progression. Outside of Davis’ performance as Rawlings, one may find it hard to identify or even find some of the films characters relevant to the films ultimate goals. For example the performance of Daniel Kaluuya (“Get Out”) as Jatemme Manning, Jamal’s brother, comes across as unwarranted and embarrassingly cliché. One has to wonder what this spectacular cast could have done with stronger character development.

Fortunately for McQueen, what he lacks in his characters he makes up for in pacing and directing prowess. He makes the audience care about these people not by their traits and decisions, but by how he presents them and their conflicts. His camera movement and fly on the wall style of directing isn’t necessarily innovative, but it gives this film a sense of stylized handling that gives the plot the stakes that the characters do not provide.

By the film’s end, audiences will either find themselves satisfied with the stylistic elements and performative subtleties of the overall production or think of the film as an unoriginal story with unimpressive roles (except Davis’) in an eye-grabbing wrapper. By no stretch of the imagination is this film terrible, but nor is it as good as it could have been. Widows simply leaves much to be desired in regards to its writing and characters which takes away from the detailed directing that McQueen provides. 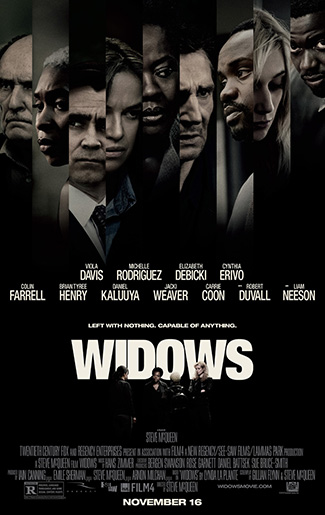