Unpredictable is a word one could use to describe filmmaker Drew Goddard, known for penning such polarizing films as “Cloverfield” and “The Cabin in the Woods,” as the “Daredevil” TV series creator is certainly not shy of finding the proverbial box and intentionally jumping outside of its lines. Though his fan-base reaches from the most pretentious of critics to the most blood addicted horror fans, none could have predicted this next step in his career, Bad Times at the El Royale, a project that is not only technically brilliant, but my shoe-in candidate for one of the most entertaining and original films of the year.

Set at the ‘El Royale’ hotel smack dab on the border of Nevada and California during Nixon’s 1960s, Bad Times at the El Royale follows a completely random (or so it seems) group of tenants all in need of a place to lay their head. Whether it’s fast-talking vacuum salesman Laramie Seymour Sullivan (Jon Hamm, “Baby Driver”), casino back-up singer Darlene Sweet (Cynthia Erivo, “Widows”), concerned sister Emily Summerspring (Dakota Johnson, “How to Be Single”) or inquisitive Catholic priest Daniel Flynn (Jeff Bridges, “Hell or High Water”), the nearly abandoned, but once booming establishment, is not short of charisma.

What initially begins as a more predictable whodunit plot quickly turns into a web of lies, deception, and redemption as these unfamiliar characters find themselves in a familiar position of turmoil. And because everything isn’t what it seems, Darlene Sweet acts as the audience guide, trying to steer viewers into the right direction. Her character is integral to the films’ progression and without her impressive performance the film could have spiraled quickly into an unrecoverable disarray.

Goddard extraordinarily brings out the best in this cast by presenting a tone and atmosphere that is just as much refreshing as it is a blast from the past. Handing over nods to Quentin Tarantino throughout like he’s begging for his approval, Goddard uses his trademark formula to his advantage: Using an all-star cast in roles unexpected of them, combining them with a non-linear original story and dousing it with personality, classic noir undertones, and extremely colorful vulgarity.

The resulting performances from Chris Hemsworth (“Thor: Ragnarok”) and Bridges especially, seem uniquely inspired and immersive, giving the film the weight and significance that it deserves considering Goddard’s objectives. Objectives that include entertaining those blood-thirsty thriller fans he’s gained from series like “Buffy The Vampire Slayer” and “Daredevil,” and presenting common ground between them and the critics who enjoyed the originality of “The Cabin in the Woods” and the attention to detail in the screenplay for “The Martian.”

Goddard had already cemented himself as an auteur with clever ideas, but Bad Times at the El Royale puts him over the top as one of few filmmakers that can implement their inventive ideas into a project that entertains as much as it technically innovates. It’s movies like this one that are needed to tear audiences away from the overabundance of remakes, sequels and superhero franchises the film community has been overdosing on. 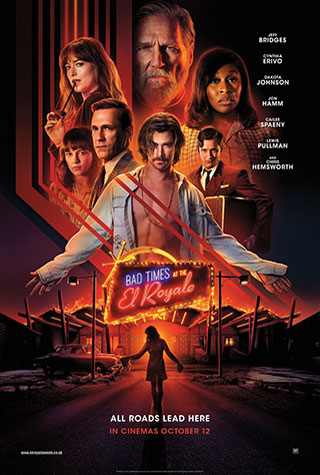