Nigerian poet and novelist Ben Okri said, “Writing comes partly out of being wounded by life. The need to create art is connected to a need to heal.” Without a market for her books and Isolated from her literary peers, for Lee Israel (Melissa McCarthy, “Ghostbusters”) healing has given way to loneliness, alcohol, and deception. Written by Nicole Holofcener (“The Land of Steady Habits”) and Jeff Whitty, Marielle Heller’s (“The Diary of a Teenage Girl”) comedy/drama Can You Ever Forgive Me? is based on the true story of author Lee Israel whose fraud is described in her 2008 memoir of the same name, a memoir that took the producers ten years to turn into a film.

Set in New York in the early 1990’s, the film recaptures a time before the chains took over — when the city still had many small, independent bookstores. Israel (who died in 2014) was never a famous author, but had some success in the seventies and eighties with biographies of name celebrities such as Tallulah Bankhead, Dorothy Kilgallen, and Estée Lauder. By the nineties, however, interest in celebrity biographies had become as obsolete as a reasonably-priced New York apartment and Israel’s books found their way onto the bargain table, being sold at a 75 percent discount.

Her feelings of alienation are evident at a New York party when she overhears author Tom Clancy saying “‘Writer’s block’ is a term invented by the writing community to justify their laziness. My success is nothing more than that I have the dedication and stamina to sit and get the work done.” Reacting to the tone and content of that statement, Lee does even not try to hide her visceral displeasure. Even her agent Marjorie (Jane Curtin, “The Heat”) is blunt in her appraisal of her client’s ability to again be a profitable author, telling her that no one is clamoring for a biography of Fannie Brice and that she needs to stay out of bars and soften her image.

Israel’s lack of self worth is reflected in the squalor of her living space which is overrun by the stench of cat litter and dead flies, and is strewn with all sorts of superfluous literary trappings. While doing research at the New York Public Library, she fortuitously discovers a pair of letters written by comedian Fannie Brice and “borrows” them to see how much money they are worth to collectors. When she finds that the collection of these items can be lucrative, using antique typewriters, she creates her own letters and other “memorabilia,” mimicking the style of such writers as Dorothy Parker, Ernest Hemingway, and Noël Coward.

While ignoring the effect her deception will have on the legacy of the writers she imitates, Israel takes pride in her ability to create and auction off fake witticisms and other amusing bon mots to collectors. Her visits to her favorite bars and pubs, however, become more and more frequent and we sense that, underneath her outward display of pride, she is troubled by her actions. When the possibility of an intimate relationship develops with Anna (Dolly Wells, “45 Years”), one of her buyers, she is unwilling to allow someone else`s affection to reach her.

Our emotional connection with Lee is a hard sell, but is aided by her “partner-in-crime” relationship with Jack Hock (Richard E. Grant, “The Hitman’s Bodyguard”), an openly gay ex-con who also had designs on a literary career but is now a sad drifter without a permanent home. The two meet regularly at Julius’, New York’s oldest gay bar, and find common ground in their need for human connection, seeing themselves reflected in the other’s loneliness and their engaging and acerbic repartee is one of the high points of Can You Ever Forgive Me? When buyers begin to catch on to Lee’s forgeries, she recruits Jack to substitute for her in pursuit of her “life of crime.” Though Jack’s charm allows him to achieve success with those buyers who have blacklisted his mentor, it does not go well for their relationship.

While not approving of Israel’s behavior, Heller does not stand in judgment of her and does not overplay her excesses. Indeed, in McCarthy’s sensitive performance, she becomes a sympathetic figure, able to display moments of vulnerability that fracture her cantankerous front. They are moments that we can relate to, if not fall in love with. When inevitably the “crime does not pay” reality surfaces and a crash landing can no longer be averted, we can see Israel through a different lens, that of understanding and compassion. 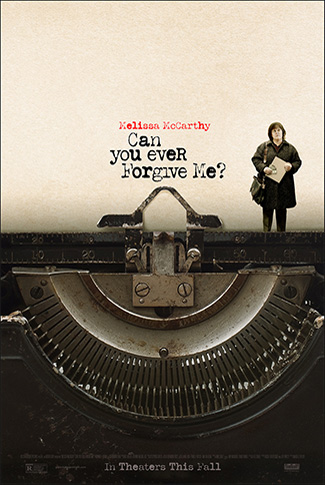