Awakenings are as births: Inherently unappealing and, when looked upon closely, intrinsically unclean. Only those involved are interested in such event and only their tricky memories (and the time that there elapses) can pretty it up till the point of making a miracle out of it — a radical makeover.

And so we come of age. All coming-of-age stories are awakening stories, and most of them are told and seen through the filter of this memory that makes up as it recollects. So what a joy it is when one has the opportunity to see films like The Diary of a Teenage Girl. Bold, unapologetic and very much self-aware of its own power, this film looks at adolescent sexual awakening (and at female sexual awakening — almost always framed in seemingly unavoidable clichés) with an eye that owes nothing to the memory that took it there. It is an eye that sees, rather than an eye that remembers. The Diary of a Teenage Girl thus stands as one of the best proofs to show that realism has very little to do with formal conventions and has much more to do with honest approaches. This film is an honest look at a teenager’s sexual emergence: Inflaming, filthy, gawky. It is an honesty that shows, but wisely keeps itself from judging.

Minnie (Bel Powley, “Side by Side”) is a 15 year-old girl living the afterlife of the Summer of Love. As we know, the San Franciscan scene of the 1970’s had to pay the sins of the 1960’s. Most of these sins were sins of innocence fueled by a rapturous anti-war sentiment that translated in an unmatchable teenage passion — the awakening of the American youth: An era when youth dreamed big and tripped even bigger. But then came the 70’s, and most of these youth had to integrate into the workforce of the American society. Some did successfully even though they became what they formerly loathed. Most of them became the shadows of what they were and had to live off the crumbs of their former visions. This is the case of Minnie’s mother, Charlotte (Kristen Wiig, “Welcome to Me”), a former beauty who can’t accept that times didn’t change for the better. Within this seedbed of forced conformity, Minnie discovers her sexual appetite, which wakes up really, really hungry. However, her poor self-perception throws her into a rapid romp that gets her into lots of trouble. Thinking she’s fat and ugly, she relies on her youth to seduce her mother’s boyfriend, Monroe (Alexander Skarsgård, “The Giver”), an ex-suave hippy in steady decline. Monroe takes Minnie’s bait and, by biting, he takes advantage of both the girl and her mother.

In unskillful hands, such a storyline would no doubt become soap opera-ish material. But in first-time director, Marielle Heller, it becomes an astonishingly honest coming-of-age story. As happens with so many bands that have been on the road for quite a long time before they’re signed to record their first album, an album for which they have more than enough material to transform it into an outstanding debut work, Heller has been working with this story for more than eight years. Almost immediately after she read Phoebe Gloeckner’s book, she adapted it into a play and cast herself for the lead role. So, by the time she took this material to the screen, she already had a very good grasp as to what she wanted. And it shows. One of main strengths of The Diary of a Teenage Girl is that it is a movie that knows very well what it is after, thus revealing a very sensible and sensitive filmmaker. Other than the occasional overuse of Steadicam, Heller is able to make the camera an accomplice rather than a witness of her protagonist. The constantly shifting points of view between objective and subjective shots go hand in hand with Minnie’s frequent oscillation between self-indulgence and self-reflection — all recorded in her audio diary (making us all recall what a cassette was and that portable recorders were the laptops of the 70’s). But Minnie’s imagination is much more visual than aural. Counting on the creative imagination of a talented cartoonist aspirant, Minnie’s inner world breathes in color — which points to a perfect contrast with her underexposed environment. The use of animation is hence an integral part of the character’s thinking process, rather than an ornament to it (the most recent example being the otherwise remarkable “Me and Earl and the Dying Girl”).

Rather than a coming-of-age story, The Diary of a Teenage Girl could be more aptly described as a tale on the age of coming. If we accept that adolescence is necessarily problematic in our society (meaning with this all modern, urban and suburban societies that make for about three fourths of the total population of the World Wide Web), then it is not hard to understand why this transition, with the wakening of a dormant sexuality, causes such a big fuss — fuss enough to have its own genre. Although it is true that, according to the anthropologist Margaret Mead, coming-of-age is not equally problematic everywhere in the world (even though, in all fairness, Mead’s data collection and analysis methods are still somewhat controversial), the one that we experience is patently so.

An important reason as to why being a teenager is so hard in our society is because, very much as the San Francisco of the 1970’s, adulthood is made out of disappointments. We’re suddenly forced to exchange our innocence for experience, but we very gradually discover that every experience entails a high quota of disenchantment, for magic ends when we become the sole agents of the world in which we live. When all external reasons for our actions and destinies disappear, the world becomes less and less magical — and more and more dull.

Minnie soon realizes that gaining experience means slowly learning how to partake in an unending chain of differentiations. Even though the world seems unenticing once we accept its human manufacturing, this doesn’t mean that it gets any simpler — on the contrary, the more complex it gets, the duller it turns. For Minnie, everything turns out to be much more complex than she initially envisioned, and she has to reckon with the mess her little venture ends up occasioning; however, she’s smart enough to understand that she was never alone in creating such a mess. And that is where discernment helps to face the fact that differentiations never end, for in difference lies complexity. If there is one thing she learns from her experience, this is that, in the real world, no one is ever innocent — only children are, and that’s why her younger sister’s role (an annoying though intermittent presence in her life) ends up becoming as vital and important as that of her mother’s. This turns out to be the real advantage of being in the middle.

Differences, in this way, are like little scars in our organic, holistic, innocent view of the world around us, for growing up means to gradually differentiate oneself from the rest of the world. Once upon a time we were an intrinsic part of another being, and we had no need to be loved because so we felt . . . even when we weren’t. But then comes the time in which we’re actually able not to feel loved, and so when we develop this uncontrollable yearn to be loved, to feel loved, to feel validated by another being, reciprocated in our desires. And this is where it’s hard to differentiate love from sex.

At this point, I can only think about the 2012 Chilean movie (another Sundance favorite) “Young and Wild” as the nearest example of how difficult making this difference is, and how many nuances there are from the feminine perspective. Unlike its Chilean counterpart, however, The Diary of a Teenage Girl sets to go beyond realizing that love is not sex and that sex does not necessarily entails love — and it can be equally pleasurable. Minnie’s yearn for love is confused with her outpouring passion, which actually scars (and scares) those more insecure prospects of her own age.

What makes all this process rather difficult to watch is Bel Powley’s extraordinary performance. At her early 20’s, she was able to dig inside her own insecurities and dig out a most convincing 15 year-old temptress. Powley’s reincarnation of the Lolita archetype (an archetype, by the way, created by a man), gives another, fresher perspective to Vladimir Nabokov’s moral: That this is a game in which the robber risks as much as their victim — and often much more than that.

As Nabokov showed and Powley conveys, teenagers are designed (and/or destined) to overcome their obsessions, to get over them, whereas those adults who try to unwind the clocks so as to move time contrariwise do so only to find that they lack the energy to let go off whatever they have allowed to obsess them — whichever recipient of their dislocated presents . . . the unachievable recreation of their lost pasts. An obsessed adult is a pathetic anachronism who’s been blinded by the luminous force of the object of their obsession — and are eventually eclipsed by it. Here lies the difference between passion and obsession, a difference Powley’s Minnie seems to grasp perfectly well. Beyond the unflattering haircut and the disagreeable lighting that follows her, there is an emerging woman who is completely certain as to what she wants to do and absolutely aware that she depends on nobody to do it. As one sees her, one can only hope this certainty will linger long enough before she realizes on how many people she depends to make it. Her still magical consciousness, however, may help her defer this realization a little longer.

Awakenings are like birds: They fly before our eyes, and before our gaze they disappear. 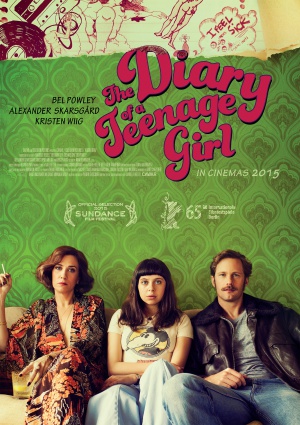