There was a time when the zombie movie was confined to a single genre, back when George Romero was terrorizing survivors in farm houses and shopping malls, but now things have gotten more complicated. The popular-as-ever undead have wandered beyond horror into the comedy, action, and drama genres. It’s great that they’ve branched out, but this versatility appears to have filmmakers Benjamin Roberds and Jordan Reyes confused about which direction they should take their zombie pic in. A Plague So Pleasant is clearly a comedy until it isn’t. Or is it?

It’s tough to say, even though the movie clearly begins and ends with a comic bent. At first, it’s oddly delightful, introducing main character Clay (David Chandler) as he converses with his quirkily deadpan roommate Todd (Maxwell Moody) over some breakfast. Todd prattles on about being a morning person and then not so subtly hints that he wants to date Clay’s sister Mia (Eva Boehnke). Clay seems fine with this, then rushes off to work.

The whole scene plays out in such a casual manner that we’re clearly meant to be taken aback when Clay steps outside and has to push aside a few decaying zombies wandering around on his lawn. He doesn’t seem too bothered by their presence and feeling we need to understand why, he explains in voiceover that when everyone stopped shooting the zombies in the head, the zombies stopped dining on the living. Some sense of mutual respect seems to go a long way.

It’s a fun twist, if a poorly explained one. The zombies probably appreciate not being vilified every now and then, but after the wonderful opening scene, it’s a little strange that Clay’s narration seems so dreary and weary. The tone of the movie suddenly shifts and for seemingly little reason. Of course, having a bunch of dead people wandering the streets and having to spend your time at work in meetings hearing about said dead people could understandably get one down, but what happened to the pleasantness of this Plague?

The humor pops up again when we revisit Todd, whose planned courtship of Mia has hit a snag because she’s still in love with her boyfriend, now a gooey zombie. At this point, the movie is straddling the line between something sad and something funny and it seems like Roberds and Reyes might be poised to make the point that zombie stories can both at the same time, a message most memorably attended to by Edgar Wright in “Shaun of the Dead.”

But then things go off the rails as the flick inexplicably (and gorily) dives into generic horror territory. The black-and-white photography turns to color for quite possibly no reason other than to better showcase the decent makeup effects and suddenly A Plague So Pleasant starts acting as serious as a “Walking Dead” episode, even making an attempt to look like one, too.

This chunk of the picture drags on for a bafflingly long time, ruining all the sweet, strange comic momentum Roberds and Reyes built up before. At this point, I simply couldn’t wrap my head around what the filmmakers were up to, why any of this seemed remotely necessary. Perhaps the point is to poke fun at the very concept of decent zombies and ultimately expose the flesh-munching monsters for what they are. Or perhaps Roberds and Reyes just really wanted to cover their genre bases, letting zombies be tragicomic figures and nasty villains in the same pic.

Part of the problem is that the execution of the more dramatic elements falls flat and tastes bland, especially when juxtaposed against the random hilarity of Todd’s personality. Another issue is that the zombie genre has been taken down so many paths now that specific attempts at originality need more than a passable idea or two to make a deep impression.

Still, A Plague So Pleasant makes an effort, which is definitely more than can be said about the umpteenth “Resident Evil” sequel. And Moody’s performance as Todd is certainly an inspired bit of silliness, making at least portions of this Plague worth experiencing. But while it’s fun to laugh at zombies, feel sorry for them, and fear them all in one sitting, a more focused, less scattered approach would likely be more interesting. Otherwise, the emotions feel diluted and the story sort of just ambles around, mimicking its subject. It’s nice that zombies can be pleasant, but you can’t always have your brains and eat them too. 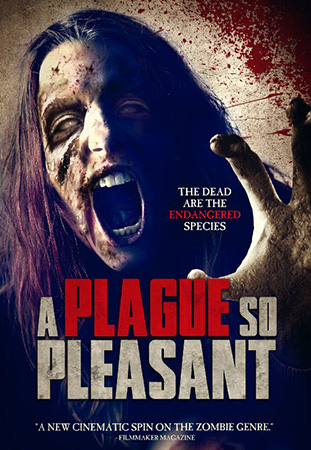