Films inspired by video games usually fall into two categories: Bad (“Doom,” “Super Mario Bros.,” “Tomb Raider”) or terrible: (“Mortal Kombat,” “Street Fighter: The Legend of Chun-Li,” “Max Payne”). Hitman: Agent 47 (a remake of the 2007 picture starring Timothy Olyphant) neatly fits into that last category. There are many reasons for this, including poor direction (by Polish-born Aleksander Bach in his debut), uninspired acting (blame Rupert Friend, Hannah Ware and Zachary Quinto, as well as a host of unknown Germans), horrid pacing and cinematography that features headache-inducing flash edits and quick cuts that not only confuse the viewer, but obscures much of the action that takes place.

Fear not, however, because the ridiculous story — called it clichéd, hackneyed or just run into the ground — has been done better before, many, many times before, so one will not miss much here. In fact, there are elements within of “The Matrix,” “X-Men,” “John Wick,” “The Terminator,” James Bond movies and even “Bride of the Monster,” the 1955 turkey in which Bela Lugosi tries to create a race of atomic supermen. Here, two doctors, Delriego (Rolf Kanies, “The Downfall of Berlin: Anonyma”) and Litvenko (Ciarán Hinds, “John Carter”), attempt to create, well, not exactly a race of atomic supermen (and women), but at the very least, an army of unemotional, indestructible, unstoppable killing machines bent on obeying orders without question.

These automatons are genetically inbred to do whatever has been programmed into them (the barcode tattooed on the backs of their heads proves this). Now, after the government (we’re not sure WHAT government is involved, but, since the entire film takes place in Berlin, you can probably guess) has shut down the program, several groups are looking for Litvenko to kick-start things again. Both Agent 47 (Friend, “5 Days of War”) and John Smith (Quinto, “Star Trek Into Darkness”) are looking for his daughter, Katina (Ware, “Shame”). Only one, however, can be the good guy, so she has a very difficult choice to make. The choice is not made any easier when the only backstories we are provided consist of a series of more annoying and infuriating quick-cut montages that last a few milliseconds and force us to try and figure out just what is going on (much of the time we just give up and move on).

Friend, as unemotional and stoic as an actor can get, is here just reflecting the blandness of his character. For the other two, though, there is no excuse for sleepwalking through a picture that almost laps itself in boredom. For a movie with more than its share of explosions, gun play, car chases, helicopter crashes and blood-letting (more ingenious ways for folks to get offed include being sucked into jet engines, smashed by fast-moving autos — mostly the entire Audi fleet — and squashed with giant clamps, among others), Hitman: Agent 47 has far too many incredibly dull sequences. People standing around talking, people swimming and talking, people showering and talking, people sitting around . . . and talking. Just wondering how a motion picture with such a crazy high body count and a budget in the millions could be so boring caused this scribbler’s head to spin, while I fear the conclusion leaves no doubt that more than one sequel is planned (although that’s what they hoped for “Eragon” and “The Golden Compass,” however, so hope does remain eternal). Sadly, though, even the mayhem quickly becomes repetitive and since both antagonist and protagonist are almost invincible, it’s even more difficult to sit through.

Not an entire waste of time and money, but as close as one can get with a few summer blockbusters still coming up, at least Hitman: Agent 47 is not as bad as “Fantastic Four,” but then again, what is? I have always maintained that the only thing worse than playing a video game is watching someone else doing it, but in this case, I think I’d rather watch a group of players engaging in any of the six “Hitman” titles, after all, it CANNOT be any worse than having to view this insipid effort. I never thought I would write this, but just rent or buy the original 2007 version, “Hitman,” you will more than thank me for the advice. 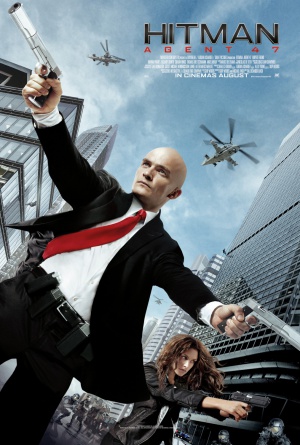