I was actually having some hopes for Doom, though. There was a foreign, almost unheard of director helming, a fresh writing team, and a couple of well cast leads suiting for such roles. “Doom” is the perfect game that can be adapted into a horror, action, or war film and come out with some ripe thrills and some edge-of-the-seat action, but I couldn’t help but notice that the movie, from the very beginning, fell apart when it tried to put pause on the story to characterize. Too many movies are now following this unwritten law of plots, that formulatic characterization that acts like it is more important than story.

Dwayne “The Rock” Johnson does offer us some insight into what the director is trying to tell us and he is the only one who didn’t at all seem confused about his character, the only thing his performance lacked was his usual humorous self-awareness about his character, which did finally come at the end. “I’m not suppose to DIE!” The rest of the cast, was not very comfortable with their roles, and the confusing addition of a female character in the story, although it is relieving that she doesn’t let out obnoxious shrills throughout the whole movie, does not bring anything but a confused “huh?”. I could have done with an all male cast for this movie. There’s nothing wrong with an all male cast sometimes and especially in a project like Doom, which is more of a reflection upon the modern man, both literally and figuratively.

Although the writing really suffered and many of the translation from the game into the movie were altered almost beyond recognition to the point where you don’t care, the most disappointing aspects was the production design, the props, and costumes. THIS is the time a movie should be reminiscent of the game. You can be extremely similar and it will still work for the film without being distracting. The sets is the most important aspect of Doom as all players of the original games know, this is what keeps you focused and on edge. But you really aren’t given that gritty, brutal feel that you get in the game and many of the weapons are altered into modernized electronic wimps compared to the more classic 12-gauge firepower in the games. The BFG 9000’s only breath-taking reactions are Sarge’s responses to it. I was hoping to see some brilliant sets, claustrophobic tunnels and corridors with lights dimming in and out at different paces, just enough time for a monster to appear directly in front of you. They really could’ve gone so far with this and had a lot of fun taking the audience through spectacular visuals, but they bent over and took it (probably because of production expenses) and the environment is too small and puny for the wide, expansive environments I would just love to see on the big screen.

Ultimately, Doom is too disappointing for a gamer’s taste and too predictable for a film buff’s taste. Instead of taking on the project with ambitious esteem, it went to the hands of filmmakers and producers who weren’t inspired enough to tackle the project head on with everything they’ve got. People aren’t willing to make sacrifices for making movies anymore, and the biggest one is money and studios aren’t paying filmmaker’s enough to take their projects to any kind of strenuous length, no where close to what the greats like Steven Spielberg, Ridley Scott or James Cameron took their ambitions to with such low budgets. Speaking of, this movie seemed like one big remake of “Resident Evil” and “Aliens”, and it does not and cannot have the support of fans with high-hopes that Hollywood can make some smart moves. Those days are drawing to an end. 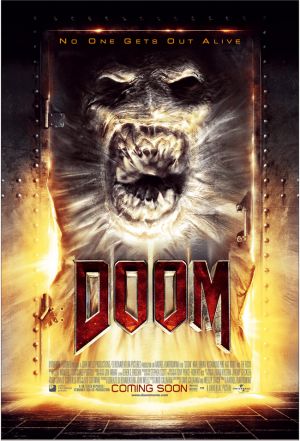