Transformers the new movie by Michael Bay, is based not on a novel, play or screenwriter’s inspiration but on a line of Hasbro toys that have been hot tickets for young boys such as myself for more than 20 years. I could not think of a greater example of a text book summer blockbuster than this live-action phenomenon. The movie is filled with almost flawless visual effects throughout much of the runtime which makes up for the lack of script, character development or storyline.

Paradoxically, the problem with Transformers is not with those much beloved playthings whose defining characteristics is the ability to change from robots to cars (or other machines) and then back. It’s the screenplay. Fearing that even the enormous wonder toys can’t tromp around and morph on the screen forever, screenwriters Roberto Orci and Alex Kurtzman have concocted a narrative to go with the robots. The problem is not only is there way too much of it but also that it isn’t very good. If this film were shorter (it clocks in at an inflated two hours and 23 minutes) and kept its focus on the toys; it would be hard to argue with.

Here is a taste of the story. The Transformers, as you all might know, come with built-in conflicts of morality. The Autobots — Bumblebee, Jazz, Ratchet, Ironhide and maximum leader Optimus Prime — are the good guys. The bad bots, Starscream, Frenzy and Bonecrusher are known as the Decepticons. They are led by none other than the mean mother fuckin’ bad ass Megatron (voiced by Hugo Weaving). Having fought each other for eons on their home planet Cybertron, the Autobots and Decepticons transfer their battle to planet Earth, where an enormous object called the Cube, or AllSpark, the source of all Transformer life, has improbably ended up. The Decepticons want it to control the universe and will wipe out anyone or anything in their way to get it. The Autobots will do anything to make sure that doesn’t happen. To aid them in their endeavor, the Autobots encounter allies in the form of a teenager named Sam Witwicky (Shia LaBeouf, “Disturbia”), a smoking hot girl Mikaela Banes (Megan Fox), a group of US soldiers in the Middle East (Josh Duhamel and Tyrese Gibson) and a sexy Australian computer hacker, Maggie Madsen (Rachael Taylor).

That’s truly about it. Bay understands that people are simply here to see giant robots thrash the hell out of both each other in metropolitan surroundings, so he doesn’t bother spending much time with preamble. The result is a more than an hour spent on hardcore action! Fans will be pleased to hear that the Prime/Megatron fight is spectacular. There are a few pet peeves though. The camera shakes so much it often makes the frenetic visuals of “The Blair Witch Project” look like a still life in comparison. Also, the morphing from robots to cars and vice versa seemed to go much to fast. If it were a bit slower and drawn out I think I could have enjoyed the mechanics of it all a bit more. Instead, it caused me great confusion in trying to determine if I was looking at one of the bad guys or one of the good guys.

It’s a tough task to adapt an 80’s children show into workable film, so I applaud the attempt. Yet any real chance to invent the rich and compelling mythology is never attempted (something I was yearning for). What I got was rather cheap tricks and a semblance of story to try and link the action sequences together. Ultimately, this is what Transformers was designed to be though. And while it is a quite effective thrill ride, it isn’t nearly enough to carry the movie. The initial viewing will please most everyone lured in by the hype but I suspect there won’t be many people lining up to watch it twice (only true fanboys will see this multiple times). This weakness will cause Transformers to topple from the charts in record time. I always liked the Gobots better anyways (just kidding). 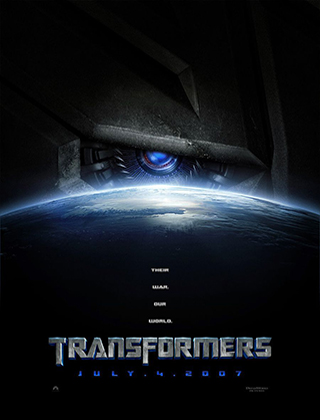