The Bourne Ultimatum is the third installment of the “Bourne” saga. This movie picks up right after Jason Bourne apologizes to the Neski daughter, without pause after the events of the second film, which may leave newcomers to the series a little perplexed. If you have seen the first two films, which I recommend before seeing the last, you know ultimately Jason Bourne (Matt Damon, “The Good Shepherd”) is now on a mission to find out who, or what his identity really is.

There is still the matter of getting away from the Russian cops, which he still manages with some aggression and economy of movement. Since Pamela Landy (Joan Allen, “The Notebook”) figured that Bourne is not responsible for the death of her two agents in Berlin, she was fine with allowing him to get away as long as he stayed off the grid and minded his own business. Unfortunately for Bourne, happy endings don’t make for very engaging movies so the trouble in this film arrives in the form British reporter Simon Ross (Paddy Considine, “Hot Fuzz”). While working on an lead to unveil Bourne, Treadstone and another covert operation called Blackbriar, Ross uncovers enough to put his life in danger. Bourne has become the CIA’s most-wanted once again. Regardless, despite a number of assassins on his trail, he is intent on finding out who he is amid muddled flashbacks of mysterious interrogations. He gets help from fellow CIA agent Nicky Parsons (Julia Stiles, “Mona Lisa Smile”), his former Paris contact, in Madrid where they end up in a diabolical chase through the alleys and rooftops of Tangiers. In the cat-and-mouse game that ensues, we travel with Bourne and the assorted people hunting him through Paris, London, Madrid, Tangiers and finally New York City where the amnesiac spy comes face-to-face with the man who helped him become Jason Bourne.

The makers of the “Bourne” series including returning director Paul Greengrass, screenwriter Tony Gilroy and cast members Allen, Damon and Julia Stiles have managed to put together a trilogy that expands upon its origins and effectively explores the geography of the chaos around one man’s life in a very exciting way. The epileptic camera work adds to the flavor of gripping action scenes. When you get right down to it, this entire trilogy is actually about a man trying to find his place in the world after losing his memory.

The Bourne Ultimatum is not without its flaws but most of those are limited to dialogue, which feels are more ham-handed and clunkier than the earlier movies. Also, to David Strathairn’s credit, he works wonders with a fairly stock-in-trade character who mouths all the cliché phrases and behaves in the manner of the classic ugly government agent. Despite its flaws this movie is miles ahead of others in its pack and what it all comes down to, is the performance of the lead character. Bourne is back and better than ever. Faster than any movie hero (who isn’t a superhero) and extremely capable with languages, subterfuge, fighting and commandeering vehicles, Jason Bourne is undoubtedly the strongest reason why James Bond is now served in a muscular and aggressive flavor.

If you truly want to enjoy The Bourne Ultimatum though, it would make sense to watch the two previous movies before you step into the multiplex for this one. Seeing how this film connects it all up is a fun bonus to support the chills and thrills already associated with following the exploits of the amnesiac super spy. 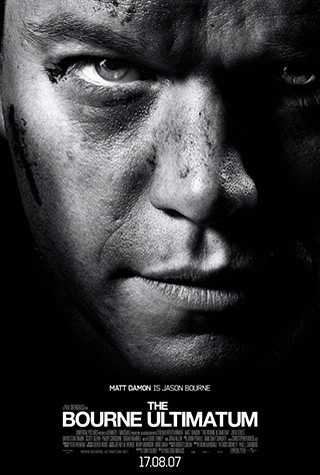