Last night in a moment weakness (also known as boredom) I sat down to watch Beneath. It’s an MTV production and even though they’ve had their hands in some relatively good movies lately like “Blades of Glory” and “Jackass Number Two,” I set my set my expectations low enough to not be upset if the movie sucked.

And amazingly, even though Beneath isn’t the anywhere near the cream of the crop of horror movies, it certainly wasn’t as bad as I has anticipated. Nora Zehetner (“Fifty Pills”) is Christy, our doe-eyed heroine. Since her sister Vanessa (Carly Pope, “Itty Bitty Titty Committee”) died six years ago, Nora has been plagued with haunting images flashing through her mind. They’ve gotten so bad that she thinks her sister was buried alive. Of course no one believes her and she’s been ostracized from the community. As luck would have it, she returns to town to attend a funeral. While there she is reunited with her brother-in-law John (Matthew Settle, “The Celestine Prophecy”), his daughter Amy (Jessica Amlee, “Superbabies: Baby Geniuses 2”) and his mother Mrs. Locke (Gabrielle Rose, “Catch and Release”). They invite her to the family home where things begin to unravel for Christy.

First thing that sets off the “something’s not right” radar is the odd manner in which the family behaves. John, is a prim and proper doctor, who exhibits little emotion. His monotone delivery is a tad unnerving, especially as he recounts the attempted remediation and the ultimate death of his wife. His mother has got a few screws loose herself. She is a self-medicator and a downright mean old lady. She shuts down anyone casting doubts or talking about the events that led to the tragic outcome. The strangest is the daughter Amy, who claims to see a “dark thing” roaming about the house. She is so convinced of it she carries knife with her. Christy immediately bonds with the little girl and decides to set forth on solving the mystery.

The movie moves along at a fairly brisk pace. There are several scenes that don’t quite make sense (doctor freely handing out patient records, unlocked filing cabinets and authorities who couldn’t give a shit) but they’re needed to lend some credibility to the story. But Beneath doesn’t really care about having a storyline that passes the reality test. It’s really all about trying to scare the shit out of you using a basic core of scare tactics. There are freaky flash visions Christy has of a person scratching the lid of coffin and of a bound deformed person, coupled with a jarring soundtrack. They’re used to a great extent (probably too much though). And if you want a horror movie what better place to locate it than at an old, dilapidated house. This is no ordinary home. It has maze-like hallways and secret passages that lead to subterranean recesses. As you can expect, the crux of the movie takes place in these dimly lit, confined spaces.

For what it’s worth Beneath mostly delivers on its promise. It provides cheap thrills that will actually catch you off guard once or twice. The twist is fairly obvious but the way the story is told it really doesn’t matter. Unfortunately, it won’t be making it’s way to the theaters any time soon (it would be great to get half lit and see it late at night with a date), so Beneath will have to be rented and viewed from the comfort of your home. On second thought, that actually sounds like the better of two possibilities. Give it a rent and enjoy. 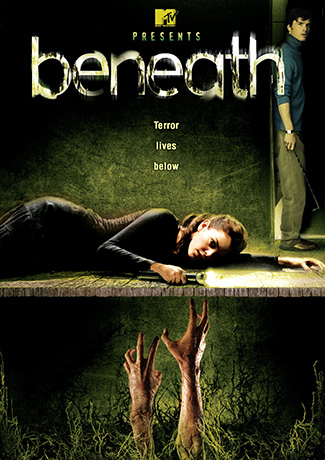