Here we go again. We just don’t get it. Once again we’re giving every country in the world another reason to hate the United States. No, we didn’t start another ill-founded war or take advantage of another poverty stricken region. No, this time we’re glorifying our excesses with the adolescent flick Bratz: The Movie.

For those who don’t know Bratz: The Movie is based on the popular Bratz dolls. These dolls are supposedly edgier than the plain old Barbie and all the cool (read as stuck-up) girls are getting them. Bringing them to life was a no-brainer and easy as 1-2-3 since no plot was necessary and any girl today can play a spoiled little bitch without even trying.

But after watching the movie, I must admit, I had the wrong impression going in. It’s not 100% about being a rich, shallow girl consumed about the latest accessories and clothing; it’s also about breaking the barriers down that encourage that type of lifestyle. Four best friends — Sasha (Logan Browning, “Ned’s Declassified School Survival Guide” TV series), Jade (Janel Parrish, “Heroes” TV series), Yasmin (Nathalia Ramos) and Cloe (Skyler Shaye, “Deadly Lessons”) — are off to high school. They’re super cool chicks who vow to remain best friends forever (BFF, for those out of the loop). That pledge quickly falls to the wayside when they each get into their own cliques — Sasha: cheerleading; Jade: science; Cloe: soccer and Yasmin: music. Helping to fuel their assimilation is Meredith (Chelsea Kane, “Arizona Summer”), the queen bee of the school, who sees social cliques as the way to maintain her iron hold on the institution.

After two years of separation, the girls realize the fatal flaw of segregation — no exposure to other types of people (race, religion, social activity, etc.) — creates an incredibly obtuse person. So they break the established norms of the totalitarian regime in charge and begin cross-mingling with kids from all the four corners of the school. To regain control, Meredith decides to fix the upcoming talent show (to ensure she wins) and to throw herself a second Sweet 16 birthday party that rivals those made sickenly famous by the MTV show “My Super Sweet 16.” Ultimately, good will and common decency can’t be stopped with extravagant parties and coercion, so there is peace in the universe once all is said and done. Lucky us.

Yet, aside from the attempt to discourage alienation due to the unknown, the only other worthwhile aspect of Bratz: The Movie was the bratty performance of Chelsea Kane. Her character is marvel to witness in action. She is so self-consumed that she performs two of the most egotistical and funny songs I’ve ever heard. What’s so scary about it is she clearly relishes her role and adores herself more than any person I’ve ever seen, so much so that she gives Narcissus a run for his money! Without her, this movie is completely forgettable. For the most part, everything else is completely exaggerated and totally contrived. The acting and writing (other than the aforementioned scenes) were on par with that other society-induced pile of shit brought to us by American Idol: “From Justin to Kelly.” That’s right, both were God awful.

And just as an aside, I’m still trying to figure out what the purpose was for Jon Voight (“Transformers”) to play Principal Dimly. It was a terrible and unneeded role. If he was that desperate for cash, he should have asked his lovely daughter Angelina Jolie to lend him a few dollars.

I’m not a complete moron, I am aware that power has shifted to our youth these days. Marketers and sellers know that young girls, and to a lesser extent young boys, have taken control of the American household. After seeing Bratz: The Movie, I implore the parents of these children to please, please wrest control back. While, the movie ultimately tries to tell a good message, its delivery just reinforces this fucked up behavior. If you simply must watch a movie of similar nature to this, see “Mean Girls.” The writing and acting are superior in every way — plus it stars a chunkier Lindsay Lohan. 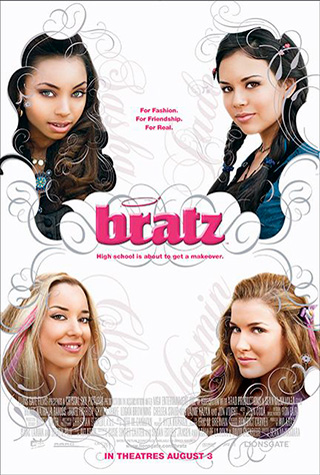